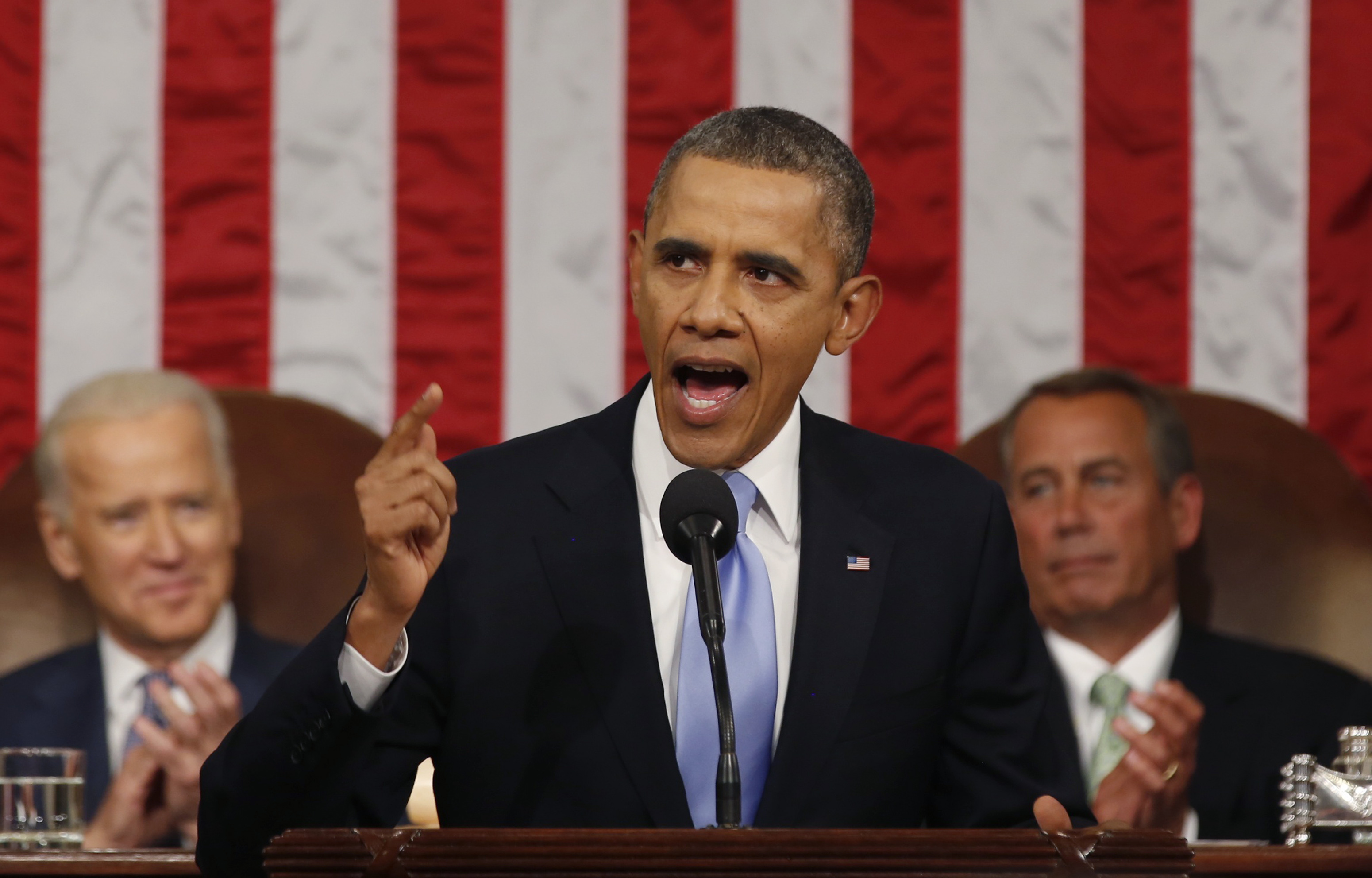 President Obama will tell the nation, "Tonight, we turn the page," when he delivers his sixth annual State of the Union address Tuesday evening.

"We are fifteen years into this new century. Fifteen years that dawned with terror touching our shores; that unfolded with a new generation fighting two long and costly wars; that saw a vicious recession spread across our nation and the world. It has been, and still is, a hard time for many," the president will say, according to excerpts released by the White House.

The excerpts show that Mr. Obama will use the address to argue that "the verdict is clear" - his economic policies helped bring the United States out of the great recession and should be a guidepost for the country going forward.

"At this moment - with a growing economy, shrinking deficits, bustling industry, and booming energy production - we have risen from recession freer to write our own future than any other nation on Earth. It's now up to us to choose who we want to be over the next fifteen years, and for decades to come," the president will say. "Will we accept an economy where only a few of us do spectacularly well? Or will we commit ourselves to an economy that generates rising incomes and chances for everyone who makes the effort?"

He will argue that his policies, which he dubs, "middle-class economics" and "expanding opportunity" have worked and will continue to work, "as long as politics don't get in the way."

The president will also focus on defending his foreign policy record as a "smarter kind of American leadership" that presented the best path forward for a country that was still embroiled in two wars when he took office.

"We lead best when we combine military power with strong diplomacy; when we leverage our power with coalition building; when we don't let our fears blind us to the opportunities that this new century presents," he will say. "That's exactly what we're doing right now - and around the globe, it is making a difference."

He will point to the fight against the Islamic State of Iraq and Syria as an example, saying that, "Instead of getting dragged into another ground war in the Middle East, we are leading a broad coalition, including Arab nations, to degrade and ultimately destroy this terrorist group. We're also supporting a moderate opposition in Syria that can help us in this effort, and assisting people everywhere who stand up to the bankrupt ideology of violent extremism."

He concedes that the strategy will take time and focus, but will promise the nation, "We will succeed." He will call on Congress to pass an authorization for the use of military force against the group.

"No foreign nation, no hacker, should be able to shut down our networks, steal our trade secrets, or invade the privacy of American families, especially our kids," he will say. "If we don't act, we'll leave our nation and our economy vulnerable. If we do, we can continue to protect the technologies that have unleashed untold opportunities for people around the globe."

Much of the content of Mr. Obama's address will not be new as he has spent the last several weeks previewing some of the major initiatives he plans to unveil. He has already announced proposals to expand homeownership, subsidize community college tuition. protect consumers online, improve corporate cybersecurity, expand broadband access and improve federal paid sick leave policies.

Republicans have a turning point of their own: for the first time since Mr. Obama took office, they control both chambers of Congress. In the official GOP response, newly elected Iowa Sen. Joni Ernst will detail how the new Republican-led Congress will "make Washington focus on your concerns again."

"We see our neighbors agonize over stagnant wages and lost jobs. We see the hurt caused by canceled healthcare plans and higher monthly insurance bills. We see too many moms and dads put their own dreams on hold while growing more fearful about the kind of future they'll be able to leave to their children," Ernst will say, according to excerpts of her speech, which will take place after the president has finished. "Americans have been hurting, but when we demanded solutions, too often Washington responded with the same stale mindset that led to failed policies like Obamacare. It's a mindset that gave us political talking points, not serious solutions."

But the GOP response won't be entirely focused on criticizing the president. Ernst is also expected to talk about issues on which her party believes they can work with Mr. Obama, such as trade and taxes.

"Let's tear down trade barriers in places like Europe and the Pacific. Let's sell more of what we make and grow in America over there so we can boost manufacturing, wages, and jobs right here, at home. Let's simplify America's outdated and loophole-ridden tax code," she will say. "Republicans think tax filing should be easier for you, not just the well-connected. So let's iron out loopholes to lower rates -- and create jobs, not pay for more government spending. The president has already expressed some support for these kinds of ideas. We're calling on him now to cooperate to pass them."

Capitol Hill on high alert ahead of rally in support of January 6 rioters
View CBS News In
CBS News App Open
Chrome Safari Continue
Be the first to know
Get browser notifications for breaking news, live events, and exclusive reporting.