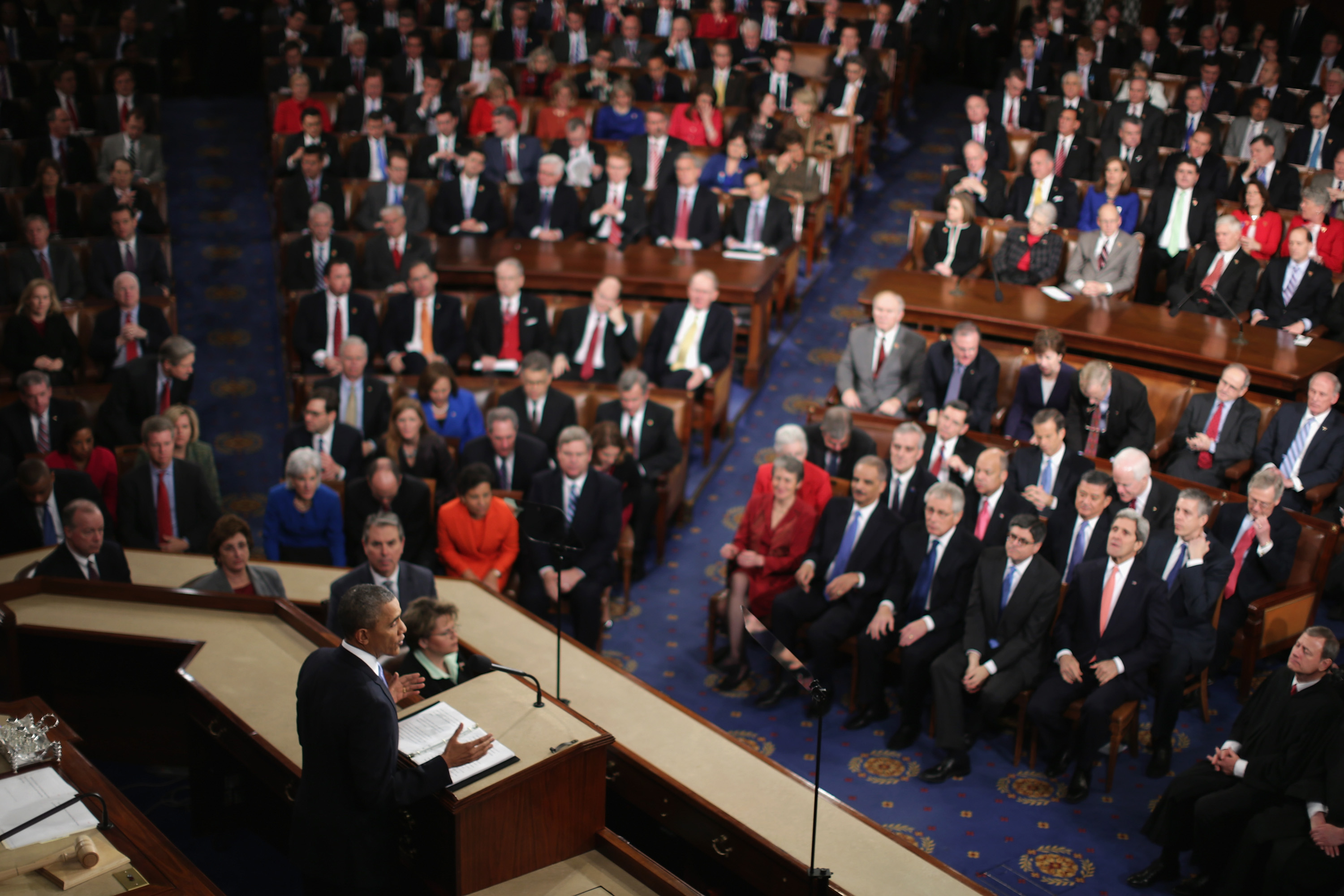 It's a #hashtag world. We're just living in it.

That, in essence, sums up the White House strategy for Tuesday night's State of the Union address.

It's a concession to social media and the fact that President Obama has lost his congressional echo chamber.

Sure, Democrats can applaud and even stand and applaud. But they can't set the agenda or bury legislation in the House or Senate. They have to watch Republicans rule. So does the White House.

That reality required a new strategy for the State of the Union. The White House didn't want to cede the first two weeks on the new Congress to Republicans, and so it dispensed with suspense and began rolling out policy proposals as if off an assembly line.

Selective leaks of new policy is a State of the Union tradition. But bracketing the speech with travel and speeches before and after is unique. And social media is the driving force behind the approach.

Conceptually, it's about creating awareness before the speech and generating a social media echo chamber during and after. Exit Majority Leader Harry Reid, enter Facebook and Twitter.

The planning began in the aftermath of Obama's second mid-term debacle. The White House had to find a way to convey political momentum and ingenuity in the face of Republican control. It also wanted to harness, if it could, some of the increased public confidence in the economy.

After all, if Obama cuts deals with the GOP confidence in the months ahead he'll need and want two things - better poll numbers and ideas to trade. His poll numbers have begun to improve and the White House wants to build a policy foundation beneath them.

This was the theoretical approach. But it became White House doctrine when aides saw the response Obama's video announcement -- shot by a White House videographer aboard Air Force One -- of his bid to waive community college tuition for students with qualifying academic achievement.

The numbers verify, according to White House aides, the utility of pre-rolling new policy to build momentum toward tonight's address. "The response was incredible to that video," said Communications Director Jennifer Palmieri. "It showed us the power of that issue and the potential of an earlier conversation to build political support."

The White House has tried to amplify support for the "free tuition" (it costs $60 billion over ten years) and other 2015 proposals on Twitter and Facebook with pre-fabricated hashtags coined as the new policies emerged.

Sympathetic constituent groups and Democratic loyalists have been primed to push the hashtags during and after Obama's speech. They are already hiding in plain sight on the White House Facebook page and Twitter account: #FreeCommunityCollege for the tuition plan; #LeadOnLeave and #FamiliesSucceed for more paid sick leave for private sector workers; #BetterBroadband for the push for improved internet access in rural America; #CyberSecurity for new consumer cyber protections; and #ActOnClimate for new regulations to control industrial methane releases.

Lost in all this is the thorny issue of serious Obama engagement on the policy areas he and Republicans have discussed face-to-face and may, if the rhetoric is to be believed, offer the possibility of cooperation. Has there been any on free trade, tax reform and infrastructure? Where are those hashtags? Republicans want to know and will be looking for signs of their possible emergence tonight.

Nothing that's come from Obama scratches the surface of these issues and the new bid to raise $320 billion in taxes from the wealthy runs counter to GOP concepts of tax reform. It could be a tradeable item later if tax reform talk ever gets serious (let's bet skeptically against this for the moment), but as an opener it's a dud in a GOP Congress.

The White House knows one thing about the audience inside and outside the House Chamber tonight - it will tilt Republican. The GOP runs Congress and will decide the fate of the president's initiatives - with foreshadowing applause and body language. The TV audience is also likely to have more Republican-leaning viewers. The country has not seen a GOP-controlled Congress listen to a Democratic president deliver a State of the Union address since 2000. The novelty itself will likely draw a higher proportion of GOP-oriented viewers than recent Obama addresses.

The White House doesn't want to bow before the GOP, and tactically that makes no sense. Better to rally the base and try to make something of a social media swirl now to solidify Obama's standing with core Democrats and get them fired up for battles to come (see federal funding, fiscal year 2015, Department of Homeland Security) with an unfriendly Congress.

Obama's advisers didn't want him to face this hostile political reality without fortifications or reinforcements. The new policies are the former, the social media strategy the latter.

The big question: how much will Obama address the fight against ISIS, the new sense of terrorist dread in Europe or the stated goal of drafting a new legal construct for the twin wars of air strikes and military training in Iraq and for Syrian rebels? The White House has been vague to the point of aloofness, suggesting Obama will put meat on the bones to create some foreign policy buzz in the speech's wake.

While this all sounds so amazingly new and techie and -- here we go...unprecedented (among the Beltway's sloppiest adjectives) -- it is not. Not in a classical sense.

George Washington and John Adams read their addresses in person to Congress. But Thomas Jefferson, aware of and slightly mortified by his squeaky speaking voice, sent his address to Congress in the form of a letter.

Every president following Jefferson did the same until Woodrow Wilson, in 1913, delivered the first State-of-the-Union address in person. The State of the Union letters in the Jefferson-to-Wilson period were frequently published in newspapers across the country -- and given especially enthusiastic layout and editorial embroidery in the sitting president's partisan press. In other words, giving the written word a place to shine and be echoed by supporters and embellished by those with a policy or political pre-disposition is, in its own way, an American tradition as old as Jefferson.

So, when the hashtags start flying and the White House speaks avidly of policy pronouncements "going viral," just remember...#JeffersonWasHere.