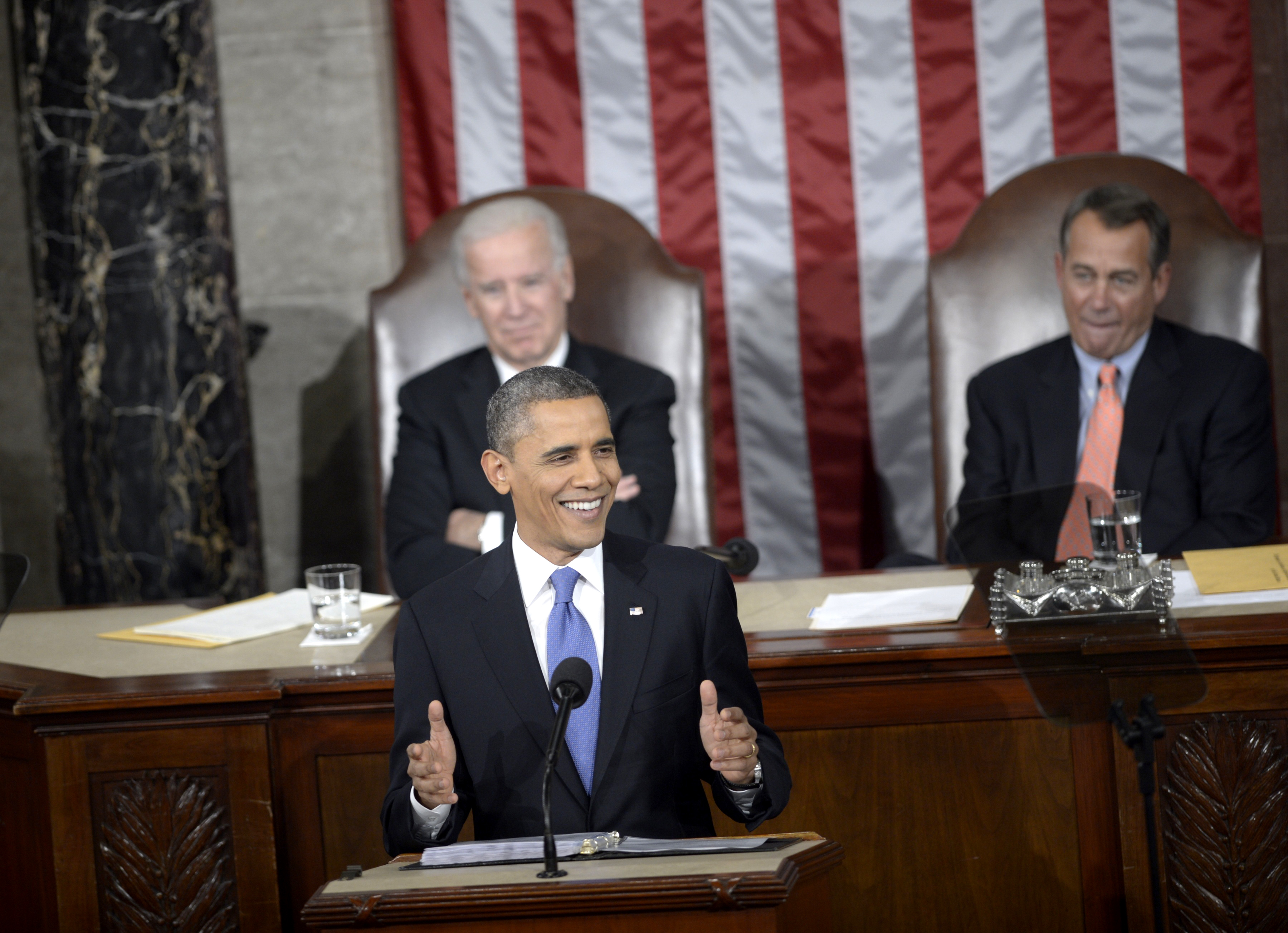 President Obama will combine a re-tooled theme, a mixed economic message, low poll numbers with some actual news when he delivers his State of the Union address to Congress Tuesday night.
The White House said that Mr. Obama will announce he will sign an executive order requiring federal contractors pay their employees a $10.10/hour minimum wage.  Workers at the Pentagon and other Washington federal locations have recently gone on strike to highlight the issue. Liberal members of Congress have urged Mr. Obama to take the step, which could, by some estimates, raise the wages of 2 million workers. Recent reports indicated the president was moving in this direction.

His increasingly brash use of executive orders to circumvent Congress has raised the ire of some Hill Republicans, but senior administration officials acknowledge Mr. Obama views executive action as a means to influence a debate in Congress by taking action that can shake up political opposition.

The example they often cite was the decision by the Department of Homeland Security to essentially remove the threat of deportation from children born in America to parents who entered the country illegally. This was carried out under the rubric of “prosecutorial discretion.” Mr. Obama followed the policy closely as it was developed at DHS and the White House consulted extensive polling on likely public reaction.

Public acceptance was strong (the White House braced for a public backlash that never came) and senior administration officials believe that prodded the Senate to pass a comprehensive immigration reform bill.

“The case for executive action has always been two-fold,” said Bruce Reed, former chief of staff to Vice President Joe Biden. “It's a way to make progress when Congress isn't, and just as important, a way to increase pressure on Congress to act.  The DREAM action in 2012 is a great example of how an administration can take action the public strongly supports and force the other side to explain why they haven't done the same."

On the economy, even administration loyalists concede Mr. Obama’s bullish take – better growth projections, better employment numbers, a stabilized housing market and lower deficits – will be hard to reconcile with calls for corporate help for the long-term unemployed, a higher minimum wage and an extension of long-term jobless benefits.

The president will also confront a rocky midterm political climate as House Democrats have given up hope of reclaiming a majority. To keep a slender majority, Senate Democrats know they will have to rely on the grit and political dexterity of their red state incumbents more than Mr. Obama – meaning White House fund-raising, not speeches matter most for the remainder of this year.

Legislatively, Mr. Obama’s biggest hope is that House Republican leaders maneuver immigration reform through numerous intra-party obstacles and create an opening for action with the Senate this summer. In this, Mr. Obama will continue to find virtue in silence, comprehending that his advocacy only makes matters worse.

“I’m not sure there’s a lot of expectation or energy behind the president and his speech,” said a top Democratic congressional aide. “After five years of being ignored, I don’t think the House Democrats really care a whole lot about what he’s going to say or say he’s going to do. The reality is not much will happen this year because of (midterm) elections.”

Mr. Obama, like presidents before him, also has TV history against him. Ratings for State of the Union speeches decline over the course of a presidency. Obama’s audience, according to Nielsen research, has fallen from 52.3 million in 2009 33.5 million last year.

In sum, House Democrats are dispirited, Senate Democrats need money and their own guile and the president’s biggest potential legislative accomplishment is in the hands of the opposition party.

No wonder the phone and the pen appear so attractive.

For two weeks the White House has tried to drum up interest in Tuesday’s speech, twice heralding emails from White House senior adviser Dan Pfeiffer on Mr. Obama’s “themes.” The White House made the highly unusual move Monday of announcing some of the most prominent guests who will sit with first lady Michelle Obama, erasing one of the few genuine moments of drama from the serially over-hyped event.
The pre-game warm up on Twitter, Facebook and Instagram is approaching – in utility and verisimilitude - Super Bowl proportions. The White House is even grasping from a page of out of Andrew Jackson’s playbook. Actually, it’s a page out of an Aaron Sorkin West Wing script, complete with Jay Carney playing foil in a virtual “redux” of Jackson’s 1837 decision (his term was winding down) to serve a gargantuan block of cheese to the public. Trying to derive whatever retroactive cache’ is left from a cherished West Wing episode, the White House on Wednesday will conduct a “virtual” Big Block of Cheese Day in which Americans can live chat with various officials. No cheese will be served, but questions will be answered.
Fluff aside, there will be serious content on foreign policy and at home. Mr. Obama will proclaim the agreement by Syria to demolish its chemical weapons stockpile is a victory for his long-cherished non-proliferation agenda. It doesn’t solve the raging civil war, but Mr. Obama can say a ruthless dictator without chemical weapons is better than one with them. Similarly, Mr. Obama will argue internationally applied sanctions against Iran led them to a preliminary deal that slows their feared pursuit of nuclear weapons and raises the prospect of a more ambitious – and far more economically and technically complicated – agreement to keep Iran’s nuclear efforts within the verifiable confines of civilian energy production.

There will also be efforts to deal with the long-term unemployed including a pledge from top U.S companies they will not discriminate against those jobless for six months or more. The pledge grows out of numerous conversations Mr. Obama has had with CEOs and more frequent and focused conversations Treasury Secretary Jack Lew has had with a larger number of CEOs.

It’s worth noting Mr. Obama has signed legislation to assist the jobless, a bill in 2011 that provided tax breaks to companies that hired short-term, long-term and disabled veterans. In 2010, Mr. Obama signed legislation that provided sizable tax breaks – payroll tax reductions to be specific – for companies that hired the unemployed. Those laws had policy and money behind them. That’s more than a corporate pledge announced in a State of the Union address. And the problem, obviously, remains.