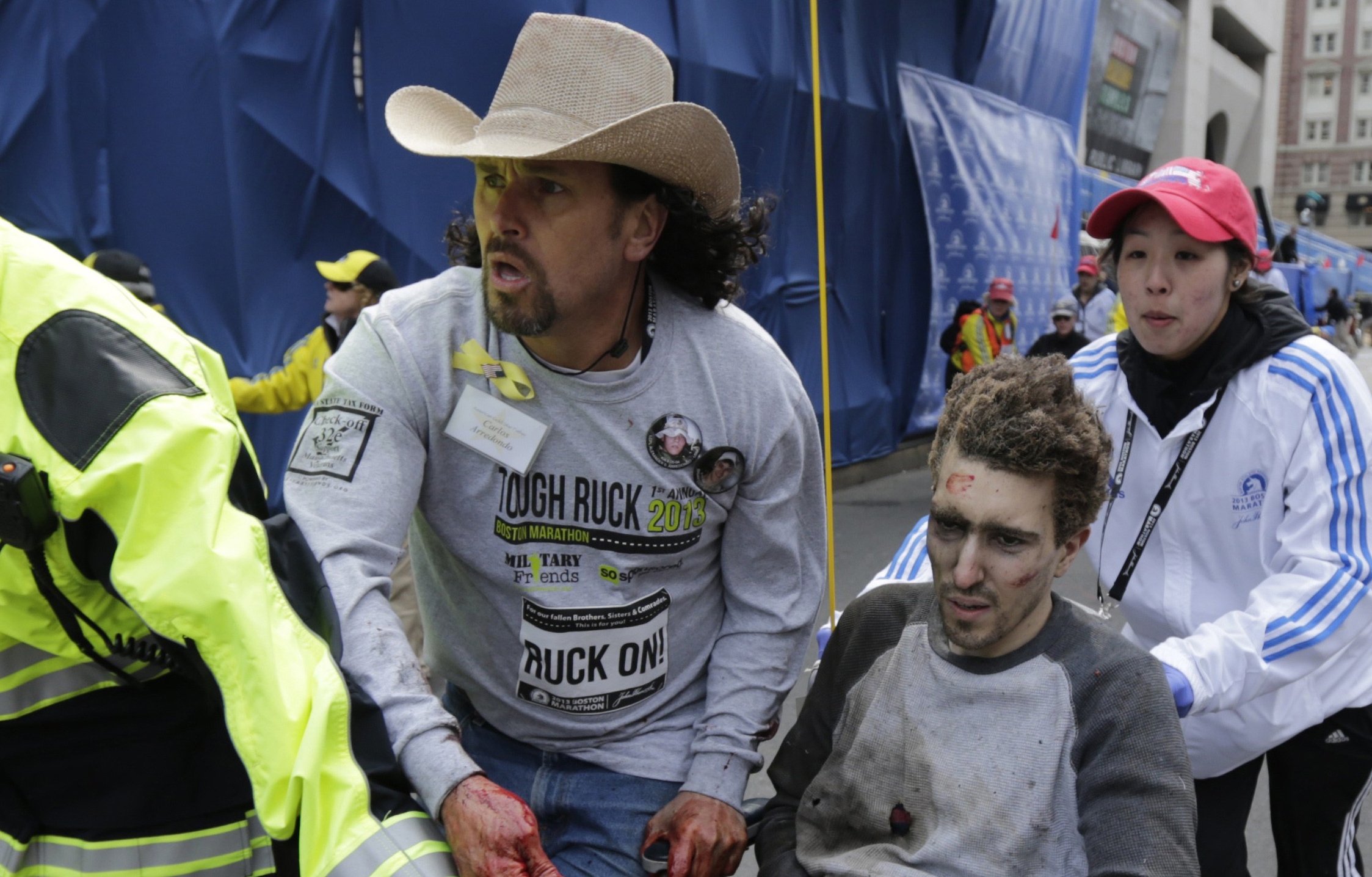 As is tradition for State of the Union addresses over the past three decades, the White House is again inviting guests to sit with first lady Michelle Obama, and this year's guest list includes two survivors of last April's Boston Marathon bombing as well as NBA player Jason Collins, the first player from one of the major professional U.S. sports to come out as gay.

It's standard practice for presidents to invite guests to sit with the first lady in the gallery "who represent something that [the president is] trying to promote, some issue that connects to their speech, somebody who has accomplished something, someone noteworthy," Senate historian Don Ritchie told CBS News before last year's State of the Union.

Below is the White House's announcement of the initial invitees; more will be announced before his Tuesday night speech.

Carlos Arredondo and Jeff Bauman (Boston): Survivors of the Boston Marathon Bombing Carlos Arredondo and Jeff Bauman are forever linked due to the attacks on the 117th Boston Marathon. In what has become an iconic image from the day in April of 2013, Carlos – wearing his white Cowboy hat – was captured rushing a badly injured Jeff away from the bombing to safety, thereby becoming two of the faces of ‘Boston Strong.’ From his intensive care hospital bed, Jeff played a vital role in identifying the bombers. After losing both legs in the attack, he is battling back, describing himself as a quick healer and stronger now than he was before the attack. Jeff, 27, and Carlos, 53 and a Gold Star Father, have become close friends.

Gary Bird (Moore, Okla.) Fire Chief: Fire Chief Gary Bird represents all of those who rallied together to help the community of Moore, Oklahoma – firefighters, police officers, teachers, neighbors – in its greatest time of need: The immediate aftermath of the EF5 tornado that hit Moore, killing 25 men, women and children and devastating a community of more than 1,000 homes and businesses. Bird and his search-and-rescue crews worked through the path of the storm to rescue survivors. “We will be through every damaged piece of property in this city at least three times before we're done, and we hope to be done by dark tonight,” Bird said in a press conference the evening the tornado hit. Bird began his career in 1981 as a volunteer firefighter in Ninnekah, Oklahoma.  After four years as a volunteer, he was hired by the Moore Fire Department, working his way through the ranks. He was appointed Deputy Fire Chief in February 2003, a position he held until being named Fire Chief on June 30, 2012. Bird and his wife, Cindy, have been married for 34 years, and they have a son, two granddaughters, and a six-month-old grandson.

Jason Collins (Los Angeles): 12-Year NBA Player While at Stanford, Jason Collins was selected as an All American, named the NCAA’s “Big Man of the Year,” and earned an appearance in the Final Four. After graduating in 2001, Collins was drafted into the NBA and has since played for six teams including the Celtics, whose then coach Doc Rivers said of Collins: “He’s the best. He literally is one of the best guys I’ve ever had in the locker room, player or coach.” In his 12 years in the league, Collins’ teams earned 9 trips to the playoffs including 2 NBA Finals appearances. In April 2013, Collins became the first male player in major American team sports to come out openly as gay. The President expressed his gratitude to Collins for his courageous announcement through an article Collins penned himself. The President said he “couldn’t be prouder” of Collins, recognizing this as a point of progress for the LGBT community, and one more step in America’s goal to treat everyone fairly and with respect. Collins is 35 and lives in Los Angeles, California.

Joey Hudy (Anthem, Ariz.): “Maker” and Intel Intern Joey Hudy is a self-described “Maker,” part of a growing community of young people, adults, and entrepreneurs who are designing and building things on their own time. Joey first shot to fame in 2012 when, at 14-years-old, he attended the White House Science Fair where the President took a turn using the contraption he had made -- the “extreme marshmallow cannon” – and launched a marshmallow across the East Room. Joey then handed the President a card with his credo: “Don’t be bored, make something.” Now 16, he has continued to live by his motto, appearing at Maker Faires all across the country. Joey, a proponent of STEM education, is determined to teach other kids about how they can make and do anything they want. Joey lives in Anthem, Arizona with his mom, dad, and older sister. Earlier this month, he started as Intel’s youngest intern, a position Intel CEO Brian Krzanich offered him on the spot at his Maker Faire exhibit.

Kathy Hollowell-Makle, (Washington, D.C.) 2013 DCPS Teacher of the Year Kathy Hollowell-Makle was named 2013’s District of Columbia Public School’s Teacher of the Year after more than 15 years teaching in the District. Kathy began as a Teach for America corps member in the District in 1998 and currently teaches at Abram Simon Elementary in Southeast Washington, DC. By the school year’s end, more than 90 percent of her students demonstrate early literacy at proficient or advanced levels and last year, more than 80 percent of her students advanced two or more reading levels. Kathy contributed some of her experience and expertise to a roundtable with Secretary of Education Arne Duncan regarding early childhood education. Kathy emphasizes a positive attitude and focuses on fluency in reading, writing and counting, explaining: “The best part of teaching is having former students recognize me, and being able to see how wonderful they turned out to be.” Kathy lives in Washington, DC with her husband Stephen and two sons Amir and Ian. She is originally from New Orleans, Louisiana.