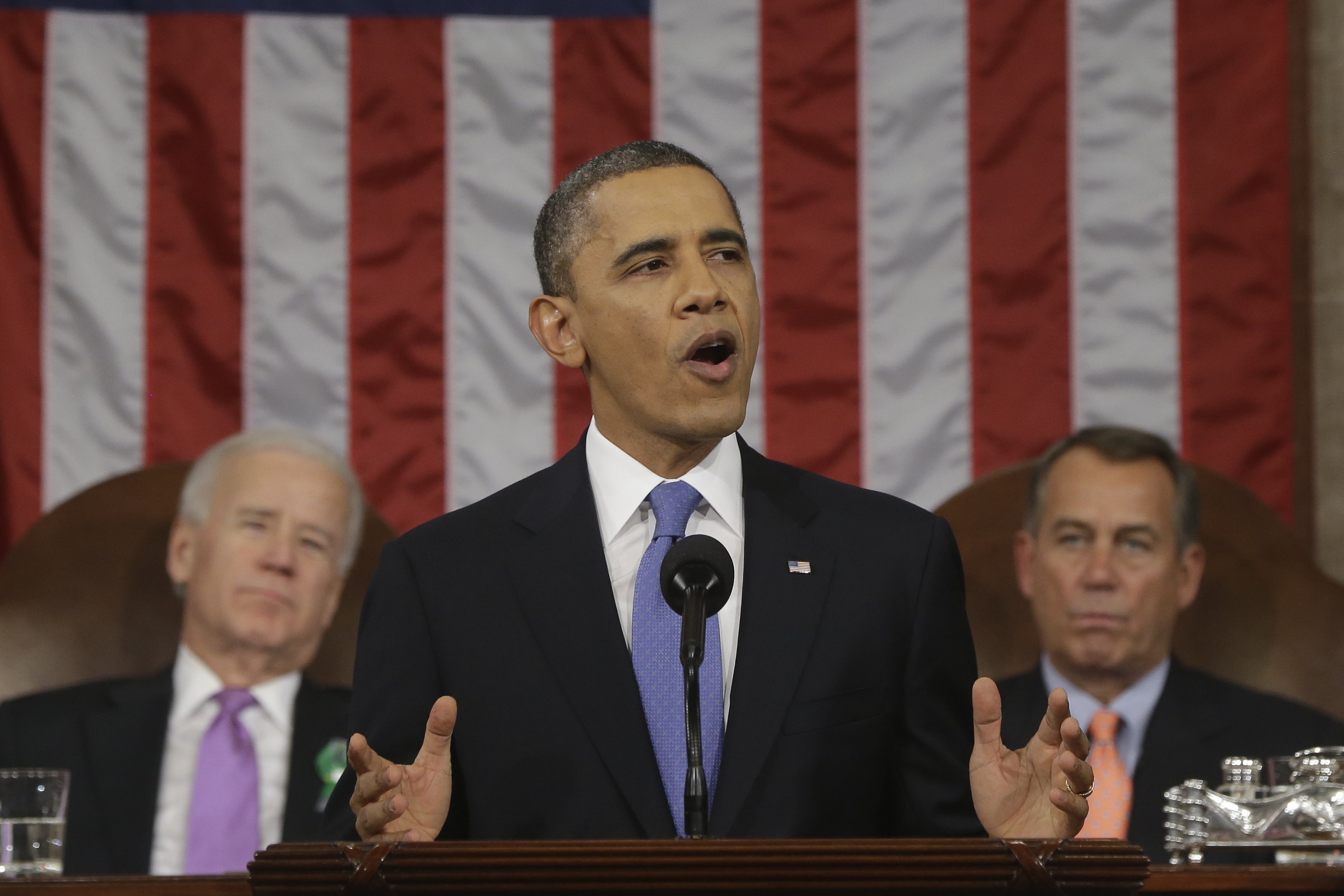 If President Obama were to send Congress a series of tweets Tuesday night on the State of the Union, he would more than fulfill his constitutional obligation.

There’s no law that requires a president to appear before a joint session of Congress and deliver a speech.

Article Two of the Constitution merely says the president “shall from time to time give to the Congress Information of the State of the Union.” A posting on Facebook would do the trick.

But what draws U.S. presidents to the House Chamber every winter is the opportunity to address the largest audience he can get most years.

According to Nielsen, the TV audience rating service, Mr. Obama’s State of the Union last year was broadcast by at least 16 networks and cable channels and delivered him an audience estimated of over 33 million viewers.

But those numbers have been on a downward slide since he took office:

The speech in 2009 was an address to Congress, but was not billed as a State of the Union speech.

Our CBS News database shows Mr. Obama has delivered 2,327 speeches, remarks and comments since taking office. Of them, he’s given:

And this year, the White House is staging an unusual blitz to attract viewers to Mr. Obama’s speech, especially among his political base.

On Saturday, senior adviser to the president Dan Pfeiffer dispatched an e-mail blast to White House supporters with a preview of the speech.

“The core idea,” he said, “If you work hard and play by the rules, you should have the opportunity to succeed.”

“On Tuesday night, the President will lay out a set of real, concrete, practical proposals to grow the economy strengthen the middle class and empower all who hope to join it,” wrote Pfeiffer.

He urged the recipients to watch a “special enhanced version” of the speech on the White House website. The president’s words will be accompanied by charts, graphs and photos assembled by his staff to provide a favorable accompaniment to his remarks.

In the hope of generating additional enthusiasm and support for the speech, Organizing for Action, the current incarnation of the Obama presidential campaign, is hosting State of the Union “watch parties” across the country.

On the morning after the speech, Mr. Obama takes his State of the Union message on the road to elicit several more news cycles of coverage for his speech.

He begins in the D.C. suburb of Lanham, Md., where he’ll address employees and others at a Costco warehouse store. Then he heads to the Pittsburgh area, to address workers at the U.S. Steel Irvin Plant in West Mifflin, Pa. Mr. Obama plans State of the Union stops Thursday in Milwaukee and Nashville.

The White House is also borrowing an idea from President Andrew Jackson by way of Aaron Sorkin and "The West Wing" TV series (1999-2006).  It’s staging a virtual “Big Block of Cheese Day” at the White House to answer public questions about the president’s speech and the proposals he put forward.

Instead of visitors dropping by the White House for some cheese and a chat, as was the case in 1837, senior White House staffers will respond to online questions via Twitter sent to #AskTheWhiteHouse. The White House even arranged for two cast members from "The West Wing" to take part in a video with White House press secretary Jay Carney promoting the Cheese Day event.

Further, on Friday, Mr. Obama will answer online questions himself in an appearance on a Google+ Hangout.

The White House marketing effort reflects the uphill battle the president faces on his performance and agenda as reflected in the polls.

Article II, Section 3 of the Constitution says the president can also use his State of the Union message to recommend to Congress for “their Consideration such Measures as he shall judge necessary and expedient.”

But for all the effort put into drafting, delivering and selling his State of the Union messages, Mr. Obama has found they rarely deliver the major objectives he is seeking.

Last year, for example, he used his address to press for comprehensive immigration reform, tough new laws on gun sales and purchases; raising the minimum wage and reforming the tax code. None of his proposals were enacted.

The president hopes but cannot reasonably expect any more success with his agenda this year – and he knows it.

That’s why he’s been serving notice that aside from his calls for congressional action on his policy proposals, he reminds Congress that he also has “a pen and a phone” he can use to implement certain programs by virtue of his executive powers. Some among congressional Republicans are already crying foul.