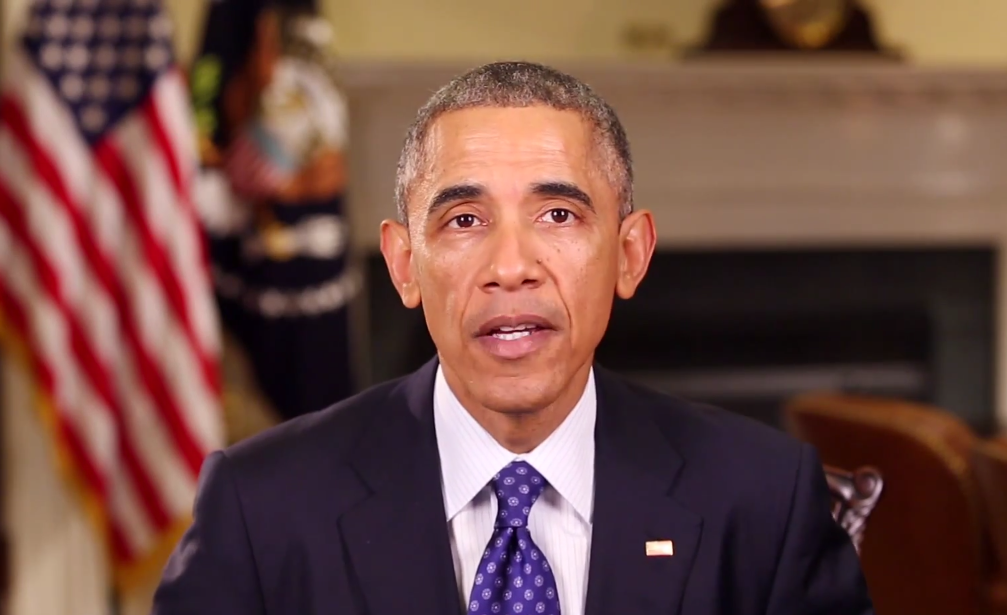 President Obama wished Americans a happy Thanksgiving on Thursday, extending his gratitude to military members and charity volunteers for their service and explaining what he loves most about the holiday.

"Thanksgiving is my favorite holiday because, more than any other, it is uniquely American," he said in his weekly address. "Each of us brings our own traditions and cultures and recipes to the table, but we all share this day, united by the gratitude for the bounty of this nation. And we welcome the contributions of all people - no matter their origin or color or beliefs - who call America home, and who enrich the life of our nation."

"It is a creed as old as our founding: 'E pluribus unum' -- that out of many, we are one," he added. "We are reminded that this creed, and America itself, was never an inevitability, but the result of ordinary people in every generation doing their part to uphold our founding ideals."

The president said he's grateful for "our brave men and women in uniform overseas and their families, who sacrifice so much to keep us safe." He promised to say an extra prayer for those service members away from home and vowed a renewed commitment "to take care of you as well as you've taken care of us."

He also thanked the "countless" Americans who give back to their communities by volunteering in soup kitchens or homeless shelters. "This generosity, this compassion, this belief that we are each other's keepers, is essential to who we are, not just on this day, but every day," he said.

Mr. Obama said he planned to spend his day with family and friends, good food and football. "But before we lift a fork, we lend a hand to go out in the community to serve some of our neighbors in need," he said. On Wednesday, the president and his family helped distribute food to needy families at Bread for the City, a volunteer charity organization in Washington, D.C.

In the weekly Republican address, which was also released Thursday, Senator-elect Tom Cotton, R-Arkansas, recalled the history of Thanksgiving, from its original celebration by the Pilgrims at Plymouth Rock to its renewal during the American Revolution, the Civil War, and World War II.

Cotton is currently a congressman, but he'll join the new Republican majority in the Senate in January, thanks to his defeat of incumbent Democratic Sen. Mark Pryor.

He urged Americans to reflect on their blessings, despite the challenges that many face. And he paused to extend a particularly hearty thank you to military members and their families.

"For many, there will be no homecoming this week. From Afghanistan to Iraq to Korea, our troops continue to patrol the world to bring peace and security for us all," he said. "To each of you, on behalf of the people of a grateful nation, I extend our deepest thanks for your honorable and faithful service."

Cotton remembered his own Thanksgiving spent abroad during his time in uniform. "Nine years ago, I was at Ranger School for Thanksgiving; six years ago, it was Mehtar Lam, Afghanistan," he said. "While we deeply missed our own families, we also celebrated together as a second, surrogate family."

He thanked the families of service members for their own sacrifice. "As you see the empty seat at your table this Thanksgiving," he told them, "please know that your sons and daughters, husbands and wives, moms and dads miss you dearly, but are enjoying the next best thing to home: the camaraderie and love of their brothers and sisters in arms."