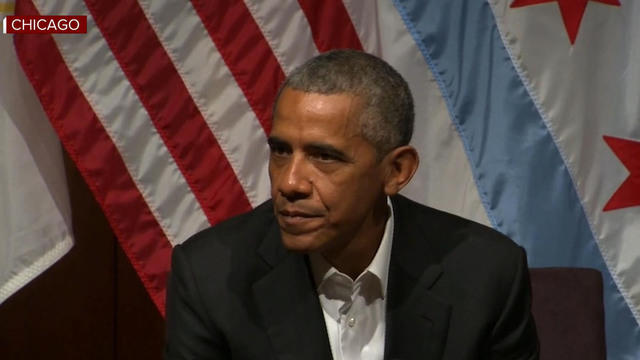 Former President Barack Obama’s return to the spotlight on Monday was a muted affair, with little by way of fireworks and no obvious partisanship in sight.

Instead, Obama spoke nostalgically of his own time in electoral politics, and spoke with great enthusiasm about younger Americans and their ability to effect change in the country.

“I’m spending a lot of time thinking about what is the most important thing I can do for my next job,” Obama said to some laughter from the crowd.

“The single most important thing I can do is to help in any way I can to prepare the next generation of leadership to take up the baton and to take their own crack at changing the world,” he added.

Obama was at the University of Chicago – where he was a law professor before his election to the Senate in 2004 – to meet with a number of young activists. Together, they traded questions and opinions back and forth for over an hour.

Included in the panel of activists was Max Freedman, a College Republican at the university. In keeping with the nonpartisan nature of the event, the two avoided disagreeing with each other and spoke of the need for more civility and empathy in American politics.

Asked by Obama whether he was anxious about revealing his politics on campus, Freedman said it depended on “the setting,” but that he does believe conservatives face “some level of ostracization” in colleges. He connected this phenomenon with what he described as a nationwide “empathy gap” that stems from people spending time with others who look and think just like them.

Together with the panel, Obama called for more face-to-face interactions between people who disagree. He said that he was able to run for the statewide office only because he had toured Illinois and had conversations with Republicans, which he said illuminated their shared values.

Obama intimated that this was a factor in his landslide Senate win, which occurred despite the fact that he was a liberal college professor with an “Arab-sounding name.”

The former president also reflected on his time as a community organizer in the South Side of Chicago, and drew on that experience to advise Ramuel Figueroa, a sociology student and Army veteran, on how he can gain a better understanding of the day laborers he studies. Obama advised that Figueroa lose his clipboard and find someone the laborers trusted to introduce him.

A discussion with Harish Patel, a young former candidate for office, also provoked Obama to discuss political failure, namely the only race he ever lost. Obama ran to unseat Rep. Bobby Rush, D-Illinois, in the 2000 Democratic primary – a contest he lost handily.

Failure, Obama said, “is terrible,” and he admitted that he had run against Rush only because it seemed like the logical next step in his career. After the election, Obama said he learned it was much more important to know what you want to do, rather than “who you want to be,” and stressed the necessity of learning from failure.

Obama ended the talk by saying that he hoped to dedicate himself to helping young people find new “pathways” to public service. To that end, Obama advised everyone in the panel to be more “circumspect” in their selfies and other social media postings.

If there were pictures of everything he did as a high school student, Obama joked, there’s very little chance he ever would have been elected president.