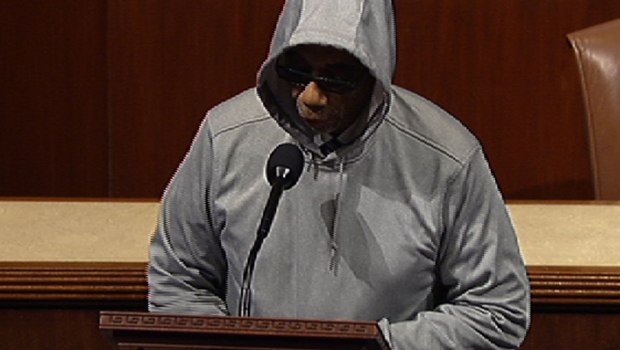 Democratic Rep. Bobby Rush, of Illinois, was escorted off of the House floor on Wednesday after donning a hoodie and sunglasses in honor of slain teenager Trayvon Martin.

Rush, who began his remarks in a suit jacket and glasses, lamented the tragic death of 17-year-old Martin, who was killed last month by George Zimmerman, a volunteer member of a Sanford, Florida, neighborhood watch. Zimmerman, who has not been charged, claims he was defending himself.

Martin was unarmed and wearing a hoodie at the time of his death.

"Too often, this violent act that resulted in the murder of Trayvon Martin is repeated in the streets of our nation," Rush said in his statement. "I applaud the young people all across the land who are making a statement about hoodies, about the hoodlums in this nation, particularly those who tread on our laws wearing official or quasi-official clothes."

At this point in his remarks, Rush took off his jacket to reveal that he was wearing a hoodie underneath it. He covered his head with the hood, violating a rule in Congress that prohibits wearing hats on the House floor.

"Racial profiling has to stop, Mr. Speaker. Just because someone wears a hoodie does not make them a hoodlum," Rush added, swapping his spectacles for a pair of sunglasses.

At this point, Rep. Gregg Harper, a Republican congressman from Mississippi who was serving as the presiding speaker of the chamber, called Rush out of order. Rush continued reading a passage from the Bible before being escorted out of the chamber.

The hoodie has become something of a symbol during the national outcry which has followed Martin's death, especially among those who think the killing was racially tinged. Since then, protesters across the nation have joined in various so-called "Million Hoodie Marches" calling for justice for Martin's death and decrying racial profiling in America. Several members of the Miami Heat NBA basketball team also recently posed for a photo in hoodies, heads bowed, in tribute to Martin.

Yesterday, Martin's parents attended a House judiciary forum in Washington, D.C., in which Democratic lawmakers called for Congress to pass stronger laws prohibiting racial profiling, and urged state legislatures to repeal the so-called "Stand Your Ground" laws which have come under intense scrutiny in light of Martin's death.

Rush's office declined to comment on the incident further to CBS News.