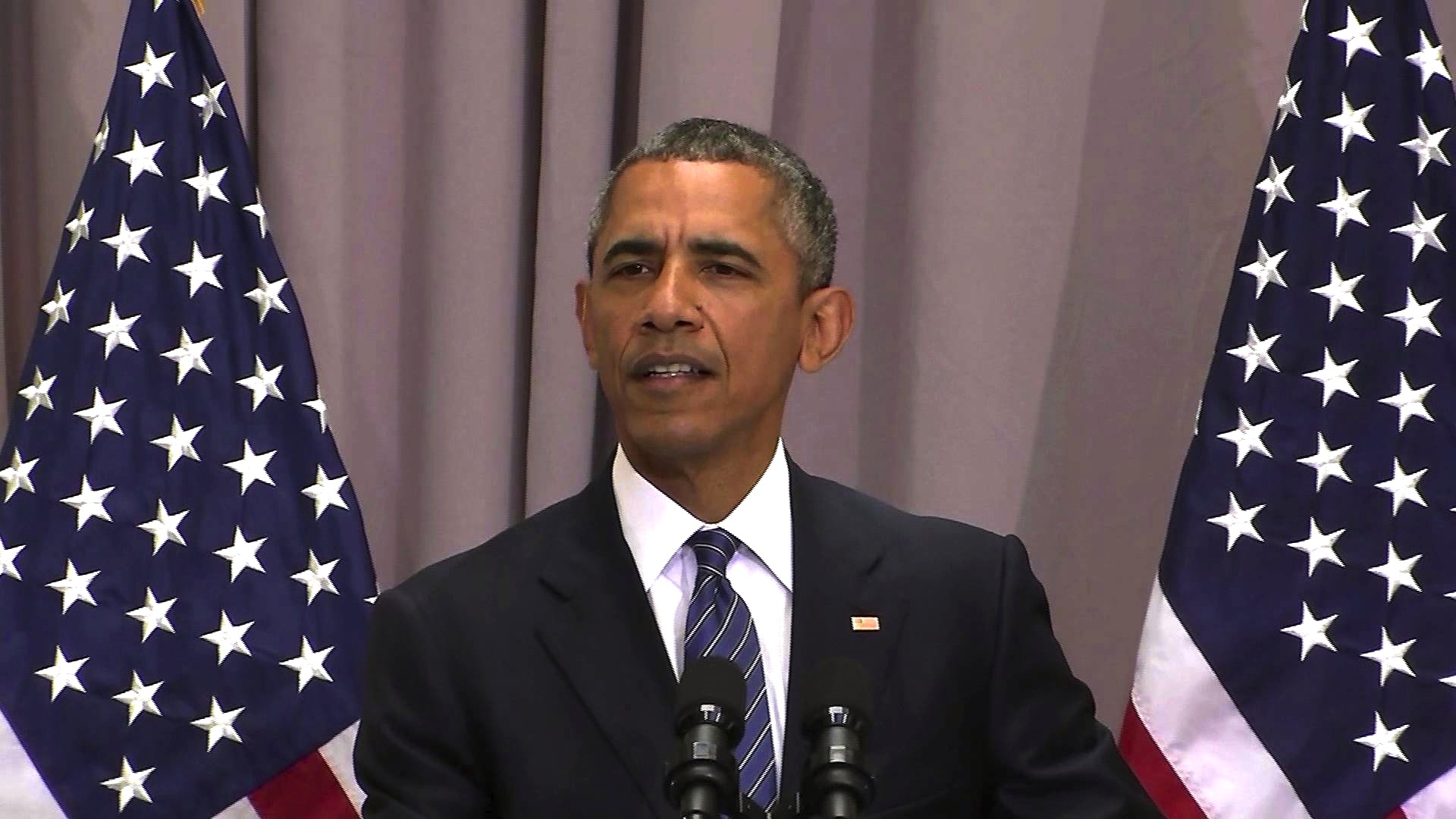 President Obama defended the nuclear deal with Iran Wednesday, arguing that it continues a successful legacy of "strong, principled diplomacy" put forth by former President John F. Kennedy in 1963 that helped win the Cold War.

"He [Kennedy] rejected the prevailing attitude among some foreign policy circles that equated security with a perpetual war footing. Instead he promised strong principled American leadership on behalf of what he called a practical and attainable peace, a peace based not on a sudden revolution in human nature but on a gradual evolution in human institutions," Mr. Obama said. "Such wisdom would help guide our ship of state through some of the most perilous moments in human history."

And in the face of persistent criticism against the deal, the president laid out the reasons it is the best - and, he argued - the only option for the U.S., short of war.

"I've had to make a lot of tough calls as president, but whether or not this deal is good for American security is not one of those calls. It's not even close," he said.

Mr. Obama said in the speech that the same people who voted for the Iraq war in 2002 are the ones who now oppose the Iran nuclear deal. Over the years, the Iraq war has grown more and more unpopular. A 2014 CBS News poll found that 75 percent of Americans believe the war was not worth the costs, up from 45 percent in 2003.

"The single greatest beneficiary in the region of that war was the Islamic Republic of Iran, which saw its strategic positions strengthened by the removal of its longstanding enemy, Saddam Hussein. I raise this recent history because now more than ever we need clear thinking in our foreign policy, and I raise this history because it bears directly on how we respond to the Iranian nuclear program," Mr. Obama said.

The president hopes to prevent further erosion of support for the nuclear agreement by linking supporters of the war to opposition to the Iran deal. He has his work cut out for him: even though nearly half of Americans surveyed by CBS News last week have no opinion of the agreement yet, among those who did, more disapprove (33 percent) than approve (20 percent). And over half of Americans - 53 percent - doubt the agreement will effectively prevent Iran from developing a nuclear weapon.

Mr. Obama addressed and countered the major criticisms of the deal - that the inspections regime is not strong enough, that some of the deal's provisions expire after 10 or 15 years, and that Iran will gain access to tens of billions of dollars in sanctions relief that it could use to fund terrorism around the region.

He argued that the Iranian regime won't be able to completely get rid of evidence of unauthorized nuclear material production, saying that "nuclear material isn't something you hide in a closet." He also said that under the agreement, Iran will never be allowed to pursue nuclear weapons once some of the limitations on its peaceful nuclear program expire, and that an Iran with more money to give to terror groups still "pales in comparison" to an Iran with a nuclear weapon.

"By killing this deal, Congress would not only pave Congress' path to a bomb, it would accelerate it," Mr. Obama said. "The choice we face," he said, "is ultimately between diplomacy or some form of war. Maybe not tomorrow, maybe not three months from now, but soon."

The president also sought to prove that rejecting the deal is no longer a viable option for Congress, because the international community isn't willing to continue sanctions against Iran indefinitely. Walking away from the deal will only result in a better agreement for Iran itself, he said, and worse, it would cost America its "credibility as a leader of diplomacy...[and] the anchor of the international system."

He also rebutted critics who argue that the administration could have negotiated a better deal with Iran.

"Those making this argument are either ignorant of Iranian society or they're just not being straight with the American people," the president said. "Sanctions alone are not going to force Iran to completely dismantle all vestiges of its nuclear infrastructure, even those aspects that are consistent with peaceful programs."

The president faces vocal opponents, like Israeli Prime Minister Benjamin Netanyahu and a slew of groups that have poured millions of dollars into campaigns to oppose the deal. The American Israel Public Affairs Committee (AIPAC) has held more than 400 meetings with congressional offices and created a group called Citizens for a Nuclear Free Iran that is advertising in 35 states and spending $20 to $40 million on lobbying efforts.

Those groups hope to convince enough lawmakers on Capitol Hill to both pass a resolution of disapproval against the nuclear deal, and to override the veto the president has promised.

The White House needs to hold onto 145 Democratic votes in the House. White House Press Secretary Josh Earnest reminded reporters Monday that 150 Democrats signed a letter in support of the Iran deal framework when it was unveiled earlier this year, giving them room to lose a couple of representatives and still prevail.

In the Senate, CBS Chief White House Correspondent Major Garrett reports the margin is possibly slimmer. The White House needs 34 Democrats to sustain a veto, a target senior officials believe they can hit even without the support of Democratic Rep. Chuck Schumer of New York, a prominent Jewish lawmaker and member of the Democratic leadership. Without Schumer, the margins get tighter, but officials believe they can still round up the 34 votes - especially after Sen. Elizabeth Warren, D-Massachusetts, announced her support over the weekend.

On Tuesday, three additional senators voiced their support for the deal: Tim Kaine of Virginia, Barbara Boxer of California and Bill Nelson of Florida. On the House side, however, Reps. Steve Israel and Nita Lowey of New York and Rep. Ted Deutch of Florida, three prominent Jewish democrats, announced they would vote against it.

Mr. Obama acknowledged Netanyahu's criticism of the deal and said the U.S. should take the concerns of such a close ally into consideration. And while he said he did not doubt Netanyahu's sincerity, he also believes "he is wrong."

"To friends of Israel and the Israeli people I say this: A nuclear armed Iran is far more dangerous to Israel, to America and to the world than an Iran that benefits from sanctions relief," Mr. Obama said. "I believe the facts support this deal. I believe they are in America's interest and Israel's interest and as president of the United States it would be an abrogation of my constitutional duty to act against my best judgment simply because it causes temporary friction with a dear friend and ally."

The president closed the speech by once again arguing that the deal is a continuation of policies advocated by Kennedy -- and he also quoted a Republican hero, former President Ronald Reagan, to argue that peace is the ability to cope with conflict by peaceful means. The choice of venue, American University, was a nod to Mr. Kennedy's speech there in 1963 to call for diplomacy in the midst of the Cold War. Wednesday, Aug. 5, also marks the anniversary of the 1963 nuclear test ban treaty signed by the U.S., Britain and the former Soviet Union.