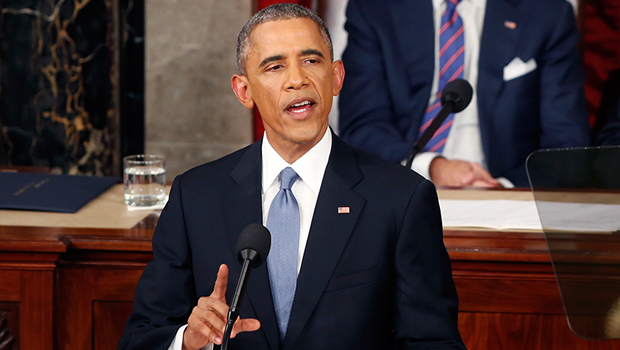 President Obama declared, "Tonight, we turn the page," arguing in his sixth State of the Union address that the nation is now ready to move past the wars and recession of the last 15 years and should embrace his economic and foreign policy initiatives moving forward.

"The shadow of crisis has passed, and the State of the Union is strong," the president said.

For the first time in his presidency, Mr. Obama faces a Congress in which both chambers are controlled by Republicans. While he identified areas where bipartisan compromise might be possible - trade and cybersecurity among them - he did not shy away from a robust defense of his administration's actions.

"The verdict is clear. Middle-class economics works. Expanding opportunity works. And these policies will continue to work, as long as politics don't get in the way," Mr. Obama said. "We can't slow down businesses or put our economy at risk with government shutdowns or fiscal showdowns. We can't put the security of families at risk by taking away their health insurance, or unraveling the new rules on Wall Street, or refighting past battles on immigration when we've got a system to fix. And if a bill comes to my desk that tries to do any of these things, it will earn my veto."

Framing the final two years of his presidency as a clash of ideologies with Republicans, he stressed a focus on the middle class with a focus on policies like expanding tax credits for families, lowering mortgage premiums and increasing access to paid sick leave.

"Will we accept an economy where only a few of us do spectacularly well? Or will we commit ourselves to an economy that generates rising incomes and chances for everyone who makes the effort?" Mr. Obama said.

"That's what middle-class economics is," Mr. Obama said, driving home the contrast. "The idea that this country does best when everyone gets their fair shot, everyone does their fair share, and everyone plays by the same set of rules." He added that this means helping Americans afford childcare, college, health care, a home and retirement, as well as lowering their taxes so they can keep more money in their pockets.

Few of the proposals in the evening's address were new. Mr. Obama has spent the last several weeks traveling around the country and introducing the new initiatives he wants to see. He went to Phoenix, Arizona, to talk about ways to expand homeownership by reducing mortgage insurance premiums; to Knoxville, Tennessee, to roll out a plan to make two years of community college free; and to Cedar Falls, Iowa, to pitch an expansion of broadband access for more communities across the country.

From Washington, D.C., he called for legislation to protect consumers online and improve corporate cybersecurity and talked about ways to improve federal paid sick leave policies. The president advocated raising capital gains taxes on wealthy Americans and imposing a fee on large financial firms in order finance new spending on community college tuition breaks and targeted tax relief for some couples and families.

"These ideas won't make everybody rich, or relieve every hardship. That's not the job of government. To give working families a fair shot, we'll still need more employers to see beyond next quarter's earnings and recognize that investing in their workforce is in their company's long-term interest," Mr. Obama said.

He promised to send Congress a budget in two weeks that is "filled with ideas that are practical, not partisan."

There were moments where he took direct aim at some Republican policies, though. Calling for policies to combat climate change, Mr. Obama said, "I've heard some folks try to dodge the evidence by saying they're not scientists; that we don't have enough information to act. Well, I'm not a scientist, either. But you know what - I know a lot of really good scientists at NASA, and NOAA, and at our major universities."

"The best scientists in the world are all telling us that our activities are changing the climate, and if we do not act forcefully, we'll continue to see rising oceans, longer, hotter heat waves, dangerous droughts and floods, and massive disruptions that can trigger greater migration, conflict, and hunger around the globe. The Pentagon says that climate change poses immediate risks to our national security. We should act like it," he said.

He claimed success not only in the economic arena, but on foreign policy issues as well. Calling his administration's actions a "smarter kind of American leadership," Mr. Obama said, "We lead best when we combine military power with strong diplomacy; when we leverage our power with coalition building; when we don't let our fears blind us to the opportunities that this new century presents. That's exactly what we're doing right now - and around the globe, it is making a difference."

He pointed to the fight against the Islamic State of Iraq and Syria as an example, saying the U.S. is leading a broad coalition of nations, including Arab partners, to destroy the jihadist group "instead of getting dragged into another ground war in the Middle East." In Syria, he said, "We're also supporting a moderate opposition in Syria that can help us in this effort, and assisting people everywhere who stand up to the bankrupt ideology of violent extremism."

He conceded that the strategy will take time and focus, but promised the nation, "We will succeed." He called on Congress to pass an authorization for the use of military force against the group, a line that received just tepid applause from members of Congress.

As the president mentioned the ongoing threat of terrorism and the recent attacks in Paris, a few members of Congress waved pencils as a show of support for the cartoonists from the satirical magazine Charlie Hebdo that were murdered.

Mr. Obama also focused on forward-looking proposals, like combating the rising threat of cyber crime against both companies and individuals. This comes in the wake of the Sony Pictures hacking last November and after other cyber attacks on major retailers like Target and Home Depot.

He asked Congress to address cyber threats the way it has addressed terrorism.

"No foreign nation, no hacker, should be able to shut down our networks, steal our trade secrets, or invade the privacy of American families, especially our kids," he said. "If we don't act, we'll leave our nation and our economy vulnerable. If we do, we can continue to protect the technologies that have unleashed untold opportunities for people around the globe."

He received applause 87 times during the speech, according to a CBS News count.

Republicans, who now control both chambers of Congress, selected one of their new senators to answer the president. In the official GOP response that will follow the State of the Union, Iowa Sen. Joni Ernst detailed how the new Republican-led Congress will "make Washington focus on your concerns again."

"We see our neighbors agonize over stagnant wages and lost jobs. We see the hurt caused by canceled healthcare plans and higher monthly insurance bills. We see too many moms and dads put their own dreams on hold while growing more fearful about the kind of future they'll be able to leave to their children," Ernst will say, according to excerpts from her speech. "Americans have been hurting, but when we demanded solutions, too often Washington responded with the same stale mindset that led to failed policies like Obamacare. It's a mindset that gave us political talking points, not serious solutions."

But the Republican response won't be entirely focused on criticizing the president. Ernst also talked about issues on which her party has found common ground with the president, such as trade and taxes.

"Let's tear down trade barriers in places like Europe and the Pacific. Let's sell more of what we make and grow in America over there so we can boost manufacturing, wages, and jobs right here, at home. Let's simplify America's outdated and loophole-ridden tax code," she will say. "Republicans think tax filing should be easier for you, not just the well-connected. So let's iron out loopholes to lower rates -- and create jobs, not pay for more government spending. The president has already expressed some support for these kinds of ideas. We're calling on him now to cooperate to pass them."

In addition to Ernst's speech, Sen. Rand Paul, R-Kentucky, is delivering his own response to the State of the Union at 10 p.m. Rep. Curt Clawson, R-Florida, will deliver a response on behalf of the Tea Party Express.

Mr. Obama's pitch to the public will not end when the cameras turn off Tuesday night. On Wednesday, he will travel to Boise State University in Boise, Idaho, to continue highlighting his proposals. The next day he will speak at the University of Kansas in Lawrence, Kansas. And he will also down for interviews later this week with a trio of YouTube stars, @BethanyMota,@HankGreen and @GloZell.

According to tradition, one member of the cabinet did not attend the address to preserve the line of succession in case of a disaster that wipes out the Capitol. The "designated survivor" this year was Transportation Secretary Anthony Foxx.