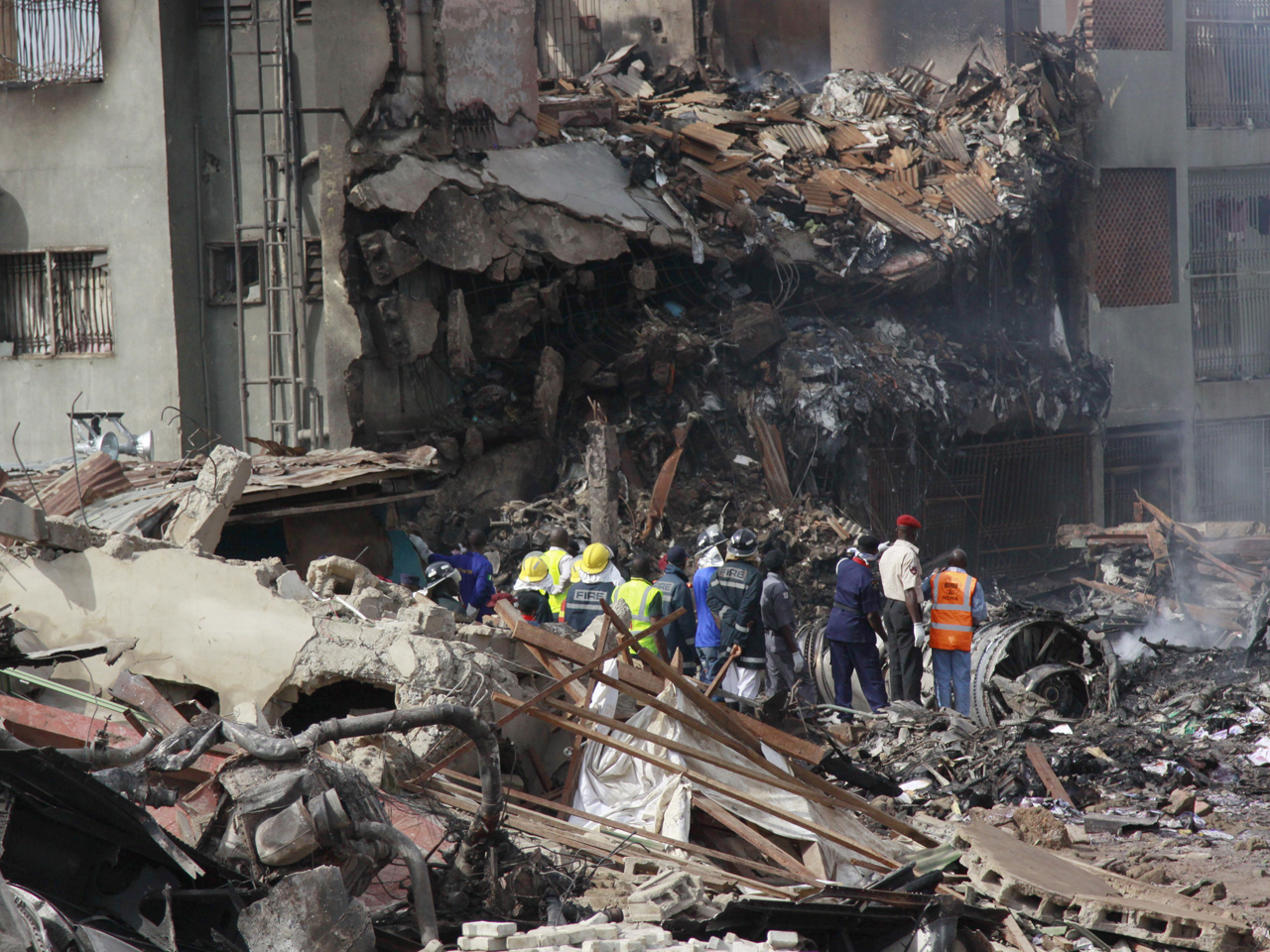 (AP) LAGOS, Nigeria - A crane hoisted the tail section of a commercial jet from the smoldering debris of a shattered neighborhood Monday in a search for the dead from a crash that killed all 153 people aboard and an unknown number on the ground.

Pilots on the flight from Nigeria's capital Abuja to its largest city of Lagos radioed the tower that they had engine trouble shortly before the crash, but the exact cause remained unclear. The weather was clear at the time.

Nigerian President Goodluck Jonathan wept as he visited the Iju-Ishaga neighborhood, where emergency workers wore masks to block the stench of the dead and the acrid smoke. A backhoe clawed at the debris looking for the dead.

Jonathan pledged to make air travel safer, but the crash called into question the government's ability to protect its citizens and enforce regulations in a nation with a history of aviation disasters.

By nightfall, searchers with police dogs recovered 137 bodies, including those of a mother cradling an infant, according to Nigeria's National Emergency Management Agency. Rescuers acknowledged they still didn't know how many people died in the wrecked apartments and smaller tin-roofed buildings along the narrow streets of Iju-Ishaga.

"The fear is that since it happened in a residential area, there may have been many people killed," said Yushau Shuaib, a federal emergency management spokesman.

Lagos state, home to 17.5 million people, has grown rapidly in recent years and soon will be home to the most populous city in all of Africa. Massive migration and urban sprawl have brought residential neighborhoods to the boundaries of the airport.

Some U.S. citizens were aboard the flight, State Department spokesman Mark Toner said, but he could not provide a firm number. Others killed in the crash included at least four Chinese citizens, two Lebanese nationals and one French citizen, officials said.

Boeing said in a statement on its website that the company is ready to provide technical assistance to the Nigerian Civil Aviation Authority through the U.S. National Transportation Safety Board. Dana Air said an investigation was under way with U.S. officials assisting the Nigerian government.

On April 19, 2010, the same plane made an emergency landing in Lagos due to loss of engine power after a bird strike following takeoff, according to the Aviation Safety Network.

The plane was exported to Nigeria in early 2009. It was first delivered in 1990 with the U.S. registration number N944AS to Alaska Airlines and had two minor incidents while in the Seattle-based airline's service, according to databases of the Federal Aviation Administration and the Aviation Safety Network. On Nov. 2, 2002, the plane made an emergency diversion due to smoke and an electrical smell in the cabin. On Aug. 20, 2006, the plane was evacuated after landing at Long Beach, California, because of smoke in the passenger cabin.

After the two smoke incidents, caused by chafing of wiring bundles in the plane, the aircraft was cleared to fly, McElroy said.

McDonnell Douglas, bought by Boeing in 1997, built the plane. It was a long-range variant in McDonnell's Douglas' popular MD-80 series, one of the most widely used plane types in the 1980s and '90s. Boeing stopped manufacturing them in 1999, although they still fly in the U.S.

Nigeria, home to more than 160 million people, hasn't had a major airline crash in recent years. On Saturday night, a Nigerian Boeing 727 cargo airliner crashed in Accra, the capital of Ghana, slamming into a bus and killing 10 people. The plane belonged to Lagos-based Allied Air Cargo.

After Jonathan viewed the crash site surrounded by soldiers and secret police officers, he vowed that accidents like Sunday's "would not repeat themselves again in this country."

"The government is totally committed to improving the quality of aviation in the country," he said. "This incident is a major setback for us."

Yet Jonathan's promises echoed those of former President Olusegun Obasanjo after another airplane crash in 2005, when he promised the government would make sure such a "calamity does not repeat itself." Instead, Nigeria has been plagued by a series of crashes in the last two decades, including a September 1992 military transport plane crash that killed 163 people.

Corruption and government mismanagement remains rampant in the oil-rich country, conditions highlighted Sunday when firefighters couldn't get water to put out the flames from the crash for hours. The crane and other heavy equipment used by rescuers also came from a private construction company, rather than government agencies.