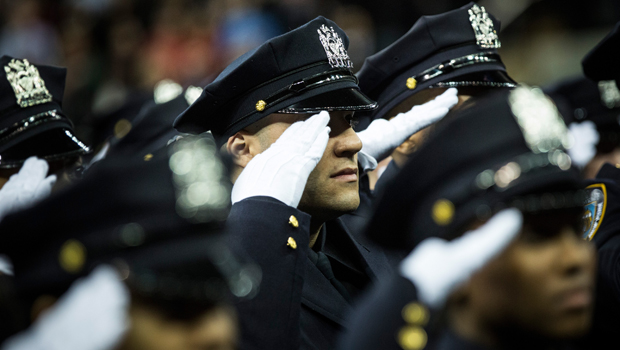 NEW YORK -- As city officials work to soften the New York Police Department's image and change how officers engage with citizens through reforms and training, part of the effort is happening online.

The nation's largest police department, once a slow adopter of social media, has created a blog and punched up Facebook use. And there are now 101 Twitter accounts department-wide after top brass were sent to an in-house "Twitter school."

"We've given the commanding officers the tools, the guidelines and the training, and most importantly ... the responsibility to do the work," said Zachary Tumin, the department's deputy commissioner for strategic initiatives. "Twitter is part of that work and part of those bridges we seek to build and reinforce."

After the Dec. 20 shooting death of two patrolmen by a man who vowed online to kill "pigs," NYPD officers sent out and received dozens of messages of support for the slain officers.

Mayor Bill de Blasio and Police Commissioner William Bratton are trying to rebrand the NYPD to counter criticism that it tramples on civil rights. The crime-fighting tactic known as stop-and-frisk is being reformed. Officers are undergoing three days of training on use of force and how to communicate with the public after the chokehold death of Eric Garner on July 17, and police in several precincts are trying out body cameras.

New York had largely eschewed the Internet until recently, while other, smaller departments embraced it. Boston used Twitter to rebut rumors and spread updates after the Boston Marathon bombings. The Denver department has more than 20,000 likes on Facebook since joining in 2012. Toronto's police have more than 300 accounts, and officers must attend three days of training. In Dalton, Georgia, the department's blog tells readers about emergencies and other news and provides information on police - including praise and suspensions.

In the past year, the NYPD's public relations unit developed a blog. Bratton has his own Twitter account. And the department has expanded from one main account, NYPDNews, to 101 covering every precinct and some special commands. Officers are encouraged to send out helpful, pithy messages and respond directly to the communities they serve.

"We want those voices out there," Tumin said.

The department also has sent its commanders to a "school" taught by in-house social media experts who encourage humor and helpfulness and discourage releasing investigative details or starting arguments.

"Don't engage in a Twitter war with someone. You won't ever win," one trainer said.

"I can investigate and arrest someone. I just can't figure out what to say in this tiny little box," one captain said. "I'm going to have to call my daughter and have her come help me."

During one hourslong tutorial at John Jay Criminal College this month, about a dozen commanding officers learned to set up handles and view messages, and were taught the difference between direct messages and regular messages. Trainers used as an example the online demise of former U.S. Congressman Anthony Weiner, who accidentally sent out a sexually explicit photo meant for private use.

The precinct links to a copy of the city's official social media policy, and now has more than 500 followers.

The department has produced a 34-page "Twitter handbook" to help officers manage the Wild West of the Internet, where even well-meaning messages can be undone by legions online.

Earlier this year, NYPDnews invited people to post feel-good photos posing with New York's finest with the hashtag #myNYPD. Instead, they found themselves awash in hundreds of images of baton-wielding cops arresting protesters, pulling suspects by the hair, unleashing pepper spray and taking down a bloodied 84-year-old man for jaywalking.

The NYPD community affairs chief sent out a message following the grand jury decision not to indict an officer in Garner's death that read: "The #NYPD is committed to rebuilding public trust. #Wehearyou" The effort was panned because Garner's last words were "I can't breathe."

And a commander in Harlem remarked on his private account about a woman who fell onto the subway tracks and died: "Let me guess, driver's fault right?" he wrote. Online activists lambasted him, and he apologized and removed the link.

There have been some successes, too. An image last winter of an NYPD officer giving boots to a homeless man became national news. When a subway train derailed last spring, one precinct shared traffic information and alternate routes until the problem was resolved.

And Community Affairs Chief Joanne Jaffe tweeted a photo of a handwritten note left by a passer-by that was tacked to the entrance of 1 Police Plaza: "It takes courage and discipline to do your duty in times like these. Thank you for serving and protecting these citizens with respect. Have a blessed day."