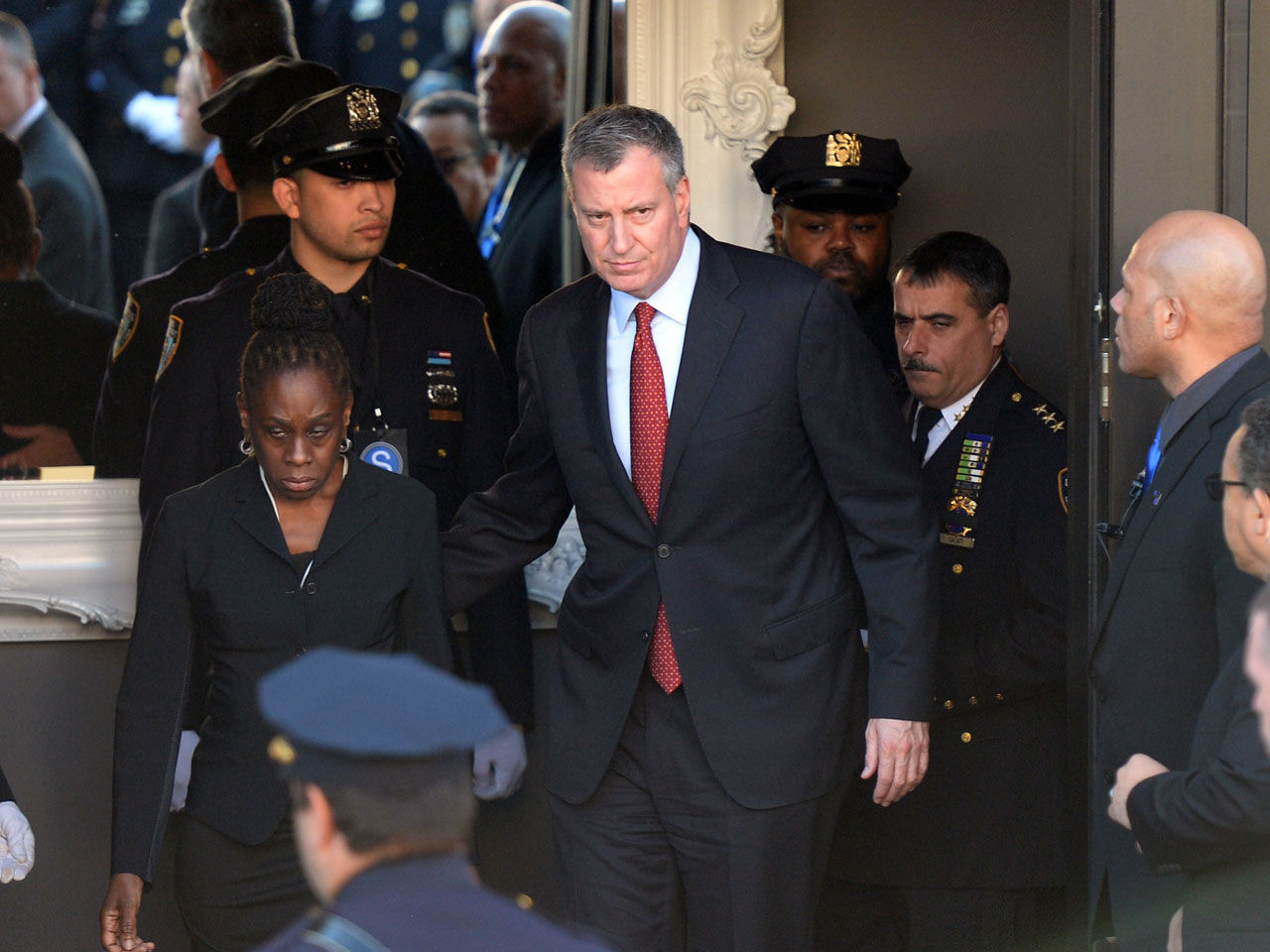 The mayor spoke at a fraught point in his relationship with the NYPD. The graduation comes two days after hundreds of officers turned their backs to a video monitor as they watched de Blasio eulogize Officer Rafael Ramos at his funeral in Queens. It was the second time officers had done so since the slaying of two NYPD cops.

When introduced at the graduation ceremony, many in the crowd could be heard booing the mayor, reports CBS New York. Others cheered and applauded.

"Let's be honest about the realities of our society," de Blasio told the graduating class of more than 800 new officers. "You'll confront all the problems that plague our society, problems that you didn't create."

Immediately after the mayor made that remark, someone from the crowd yelled, "You did!" to a round of applause.

The mayor also addressed the killings of Ramos and his partner, Wenjian Liu.

Tensions have been running high between DeBlasio and some of the city's police officers since Ramos andLiu were shot and killed in their patrol car earlier this month. Police union officials blamed DeBlasio for their deaths, in part because of his public support for people protesting grand jury decisions not to indict police officers who had killed two black men, Michael Brown and Eric Garner.

After the officers' deaths, the gunman, Ismaaiyl Brinsley killed himself.

In online posts prior to the attack, Brinsley said that their deaths would be in retaliation for police killings.

"That funeral was held to honor Officer Ramos, and to bring politics, to bring issues into that event I think was very inappropriate and I do not support it. He is the mayor of New York, he was there representing the citizens of New York to express their remorse and their regret at that death," Bratton said.

Bratton acknowledged that the morale of officers is low and said their actions "unfortunately" reflected the feelings of some toward the mayor.

But Bratton insisted de Blasio has been supportive of police, noting that the city has given the NYPD hundreds of millions of dollars that was not budgeted, much of it devoted to improving officer safety.

But some officers blame de Blasio for creating an atmosphere of negativity toward the NYPD in the city after a grand jury declined to charge an officer in connection with Garner's death.

Former Mayor Rudolph Giuliani told "Face the Nation" that it was wrong for officers to turn their backs on de Blasio or to try to blame him for officers' deaths.

"I don't think police officers should turn their back on the mayor," he said. "Whether they like him or not, they should respect the office."

But he also said de Blasio should apologize to the police department because he "created an impression with the police that he was on the side of the protesters."

"Every cop in this country thinks of him as someone who hates them," he said.

The gesture at Ramos' funeral also came amid contentious contract negotiations with the city. The rank-and-file police union did not claim credit for the symbolic protest, and its head, Patrick Lynch, repeatedly dodged reporters' attempts to ask about it after Ramos' funeral.

The silent protest was a continuation of the defiance shown at a hospital after the officers' slayings when Lynch and others turned their backs on de Blasio. Lynch said the mayor had "blood on his hands."

It was not clear if officers planned to turn their backs on de Blasio again at Liu's funeral.

Aievoli Funeral Home said viewing and visitation for Liu will be held from 1 p.m. to 9 p.m. Saturday. His funeral will be at 10 a.m. Sunday. Both will be at the funeral home in Brooklyn.

De Blasio stayed out of sight Sunday, staging no public events and continuing to let Bratton hold center stage in the week since the double murder.

The five city police unions will meet with Bratton this week.