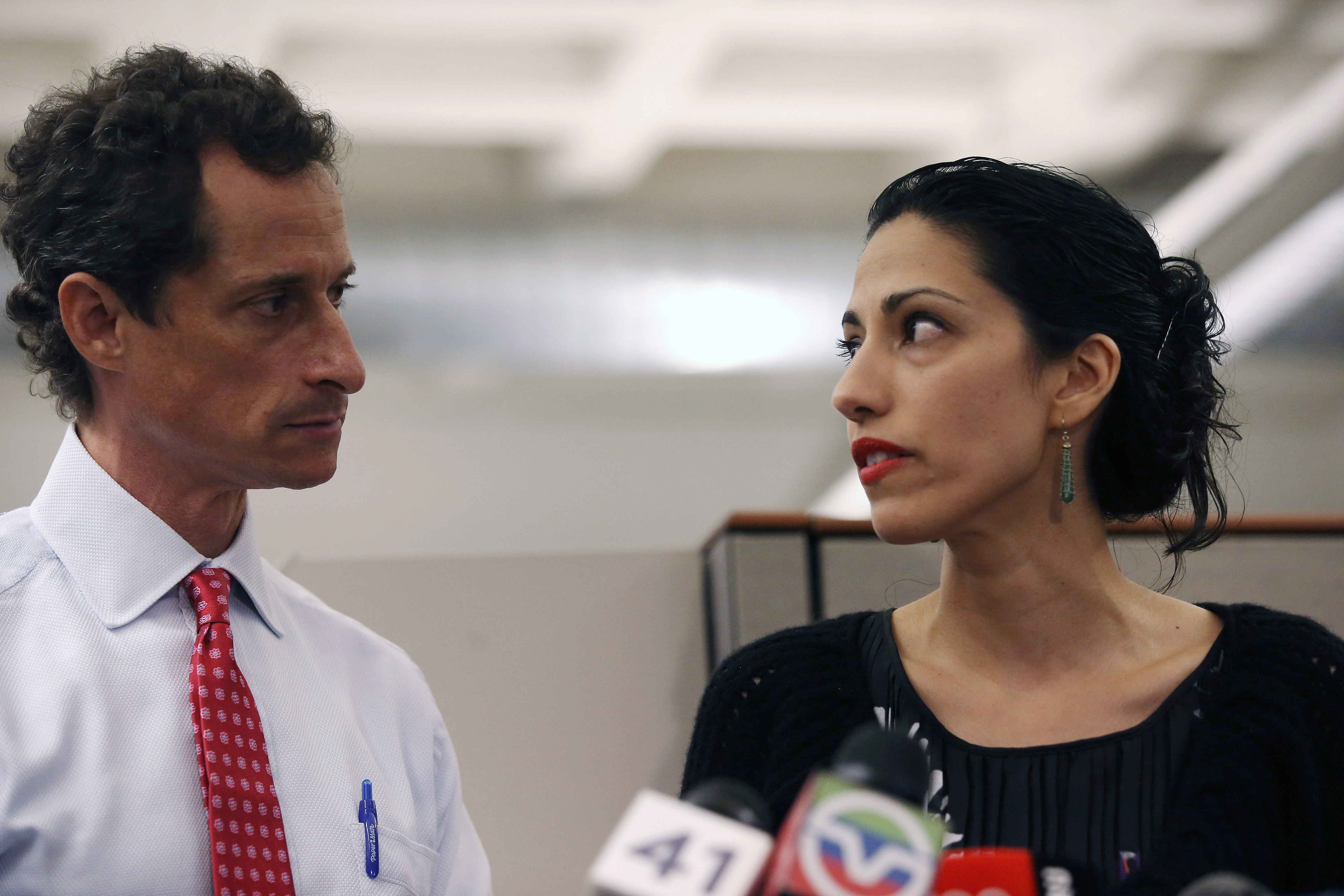 As predicted by Anthony Weiner himself, the sex scandal that led to his 2011 resignation from Congress would become an issue during his mayoral campaign. And a series of lewd texts and photos revealed Tuesday has forced Weiner to ask New Yorkers to "give him another chance."

In a news conference late Tuesday afternoon, Weiner read a statement apologizing for his behavior and he repeated, as he has done since he jumped into the New York City mayoral race in May, that he and his wife, Huma Abedin, are "moving forward."

Abedin, who to this point had not spoken about the scandal during Weiner's mayoral campaign, told reporters that she "strongly" believes this scandal is "between us" and added, "I love him, I have forgiven him, I believe in him and as we have said from the beginning, we are moving forward."

Weiner opened the press conference saying, "As I have said in the past, these things that I did were wrong and hurtful to my wife and caused us to go through challenges in our marriage that extended past my resignation from Congress," adding, "I want to again say that I am very sorry to anyone who was on the receiving end of these messages and the disruption that this has caused."

The Associated Press reported that The New York Times and three other candidates running for mayor -- Bill de Blasio, John Catsimatidis and Sal Alabense -- called for Weiner to leave the race. In its editorial, the Times wrote that Weiner "should take his marital troubles and personal compulsions out of the public eye, away from cameras, off the Web and out of the race for mayor of New York City." The New York Daily News also called for Weiner to drop out.

Harper's Bazaar published a piece Tuesday that Abedin wrote about her support of her husband's latest campaign. "New Yorkers will have to decide for themselves whether or not to give him a second chance," she wrote. "I had to make that same decision for myself, for my son, for our family. And I know in my heart that I made the right one."

Weiner, a Democrat, responded to a report of newly-discovered explicit online messages to an unidentified woman. The woman told the blog The Dirty that the exchange continued through August 2012, but Weiner repeatedly refused to comment on the timing, simply suggesting it happened after his June 2011 resignation from Congress.

In 2011, Weiner accidentally tweeted photos of his crotch to his Twitter followers, but claimed he'd been hacked.

He'd mistakenly sent a lewd message to his followers that was intended to be private. He ultimately admitted to having "inappropriate" online relationships with several women and resigned that June.

"I'm surprised more things hadn't come out sooner," Weiner said Tuesday. "Things aren't that much different than they were yesterday."

"I said there were more things out there," he continued. "We went through this process and worked through some of these challenges and we put it behind us."

In May, he announced he would seek the Democratic nomination for New York City mayor, embarking not only on a political campaign but also an apology tour.

Recent polls have shown support among NYC Democrats for his bid, though his former congressional colleagues have either endorsed other candidates or stayed silent.