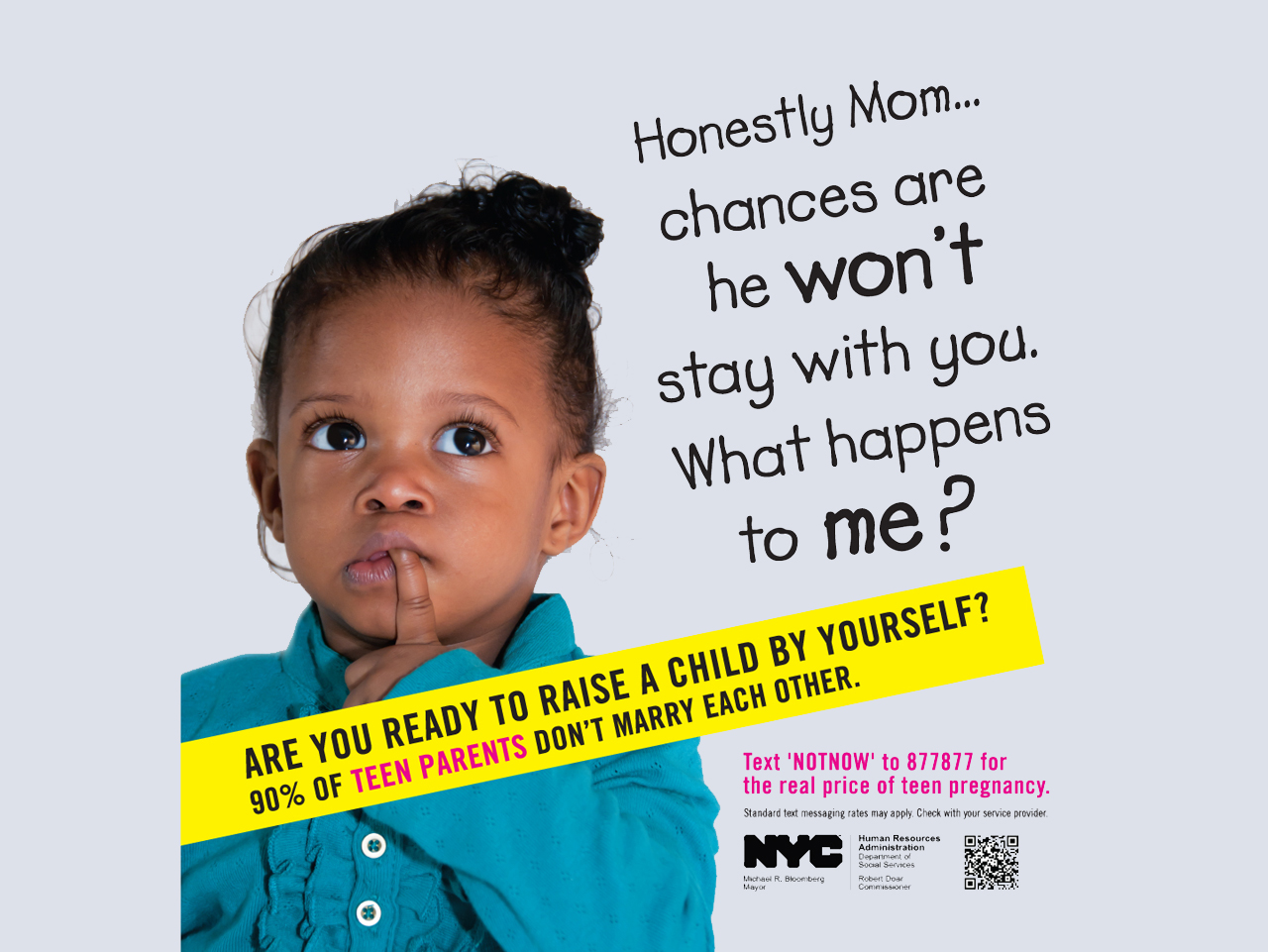 Though teen pregnancy is on the decline in the U.S., it is still an issue. To help combat the problem in the Big Apple, New York City launched a public service announcement (PSA) campaign on Monday stating the startling statistics and reality of being a young parent and the effect it can have on your child.

The ads, which will run in the city's subways and bus shelters, feature crying and sad children alongside teen parent statistics.

"Honestly Mom... chances are he won't stay with you. What happens to me?" one PSA reads.

"I'm twice as likely not to graduate high school because you had me as a teen," another PSA states next to an image of a crying baby boy.

In addition, there will be an interactive texting program featuring facts, games and quizzes about teen pregnancy and a YouTube video directed towards teens about the subject.

The PSA ads were made by the NYC Human Resource Administration's (HRA) Office and Communications and Marketing (OCM). In a press release about the project, Commissioner Robert Doar said the issue was important to address because it showed the true statistics about teen pregnancy.

Teen birth rates were at an all-time low in the United States in 2011, with about 31.3 births per 1,000 women reported. The numbers have been declining in New York as well. The New York City Office of the Mayor reported that while the city's teen pregnancy rate dropped 27 percent in the last 10 years, there are still more than 20,000 teen pregnancies each year. Eighty-seven percent of those are to unwed, young parents. The HRA pointed out that eight out of 10 teen parents are unlikely to marry their partner within the first year.

"This campaign makes very clear to young people that there's a lot at stake when it comes to deciding to raise a child," Mayor Michael Bloomberg said in a press release. "We've already seen important progress in our effort to help more teens delay pregnancy - teen pregnancy has steadily declined in New York City -- but there is more work still to be done. We aim to build on our success by asking teens to take an honest look at some of the realities of parenthood they may not have considered. By focusing on responsibility and the importance of education, employment, and family in providing children with the emotional and financial support they need, we'll let thousands of young New Yorkers know that waiting to becoming a parent could be the best decision they ever make."

However, some media outlets have questioned whether or not the PSAs were trying to send a message by shocking viewers. The Washington Post reports while shock campaigns have worked for other cities like Milwaukee, the ads may cast a negative light on teen parents themselves:

"At the same time, with ads like these, researchers tend to worry about the potential stigma they might bring to teen parents. This has been true with anti-obesity advertising, such as a recent campaign in Georgia that, much like these new ads, had researchers questioning whether the line had been crossed."

When asked about the issue, the HRA told CBSNews.com they were aware of the media reports and referred a previous statement issued in a press release.

"Teens giving birth before they are ready to provide emotional and financial support is not a good way to raise children," Doar explained. "We cannot dictate how people live their lives, and sometimes even the best plans don't work out, but we must encourage responsibility and send the right message, especially to young people."