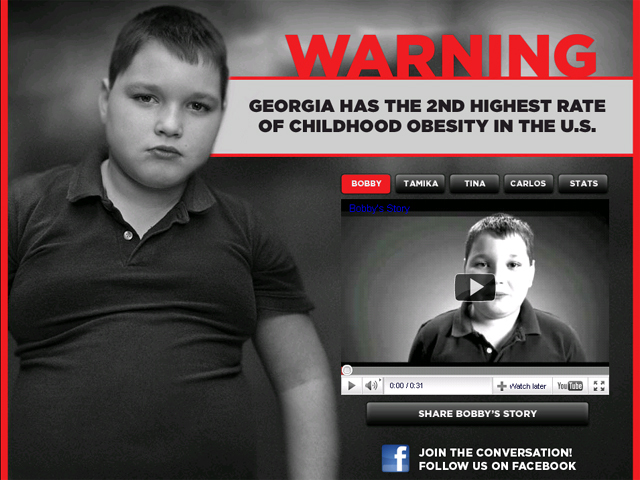 (CBS/AP) Unfair. That's what some are calling Georgia's new anti-obesity campaign, which features images of overweight boys and girls staring somberly from billboards and online videos.

"Chubby kids may not outlive their parents," reads one of the signs. Reads another, "Big bones didn't make me this way. Big meals did."

The ads won praise for their attention-grabbing tactics. But they also have outraged parents, activists and academics who feel the result is more stigma for an already beleaguered group of children.

"Billboards depicting fat kids are extraordinarily harmful to the very kids they are supposedly trying to help," said the National Association to Advance Fat Acceptance.

The Georgia Children's Health Alliance, which created the ads, said they were necessary to jar parents of obese kids out of a state of denial that their children had a problem.

The furor reflects a broad nationwide phenomenon as states, cities and the White House itself expand efforts to curb obesity. For all the public support of these efforts, there's also a vocal and passionate corps of skeptics worried that discrimination toward overweight people will only increase.

"Stigma is not an effective motivator," said Rebecca Puhl, a Yale University psychologist who is an expert on weight discrimination. "Whether children or adults, if they are teased or stigmatized, they're much more likely to engage in unhealthy eating and avoidance of physical activity."

Many aspects of "Let's Move" won near-universal praise. But activists in the fat-acceptance movement and experts who espouse a "health at every size" approach were upset that the campaign encouraged the monitoring of children's body mass index (BMI).

Linda Bacon, a nutrition professor at City College of San Francisco, is the author of "Health At Every Size" - a manifesto for a movement stressing a healthy lifestyle rather than weight control. She said the focus by "Let's Move" on BMI was of dubious medical value and posed potential problems for kids at all weight levels.

"It's done much more damage than good," Bacon said. "The larger kids feel bad about themselves, and the thinner kids feel it doesn't matter whether they exercise or eat well."

There's no question that "Let's Move" has broad, high-powered backing, from groups such as the American Academy of Pediatrics. Its supporters note that one in three American children are overweight or obese, putting them at high risk of serious health problems while billions of dollars are spent yearly treating obesity-related conditions.

But Puhl says too little attention is paid to such bullying.

"Youth who are obese cannot conceal their weight - their stigma is very visible," she said. "And yet their voices are not being heard. They are so vulnerable to victimization, with such devastating consequences."

She also has examined how obese people are portrayed in ads, news reports, movies and TV shows. Too often, says Puhl, they are depicted in needlessly negative ways - slouching on a sofa, eating junk food.

"We need to be sure we are fighting obesity, not obese people," she says.

See the ads for yourself at the Stop Childhood Obesity site.