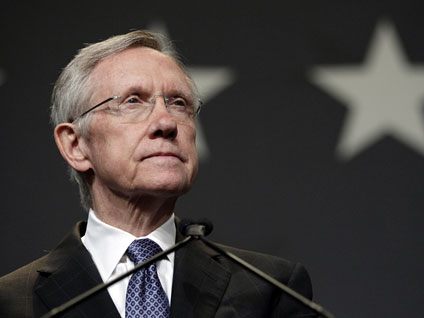 Democratic leaders in the Senate sought to downplay Republican gains in the 2010 midterm elections and set themselves up as the political party that is trying to play nice during a Wednesday afternoon conference call with reporters.

Democratic Senate Leader Harry Reid may have pulled an old political switcheroo on the ascendant Republican leadership when he declared that "the ball is in their court," even though Democrats maintained control of the Senate after a brutal series of midterm election loses.

Reid, who just survived a tough re-election fight in Nevada, said the most important thing this upcoming congress can do is fix the economy and "put power back in the hands of the middle class." (See All Nevada Results)

"Republicans must take the responsibility of solving the problems of ordinary Americans," Reid said. "'No,' is not the answer. It has to be a combined, 'Yes.' The time for politics is over."

Reid's chief political wrangler this past election cycle, New Jersey Senator Robert Menendez, chair of the Democratic Senatorial Campaign Committee, even sought to downgrade the historic nature of the gains made by Republicans in the elections.

"Since 1930, every time the House switched control, the Senate has (also) switched control," Menendez said during the press conference, which also included Democratic senators Chuck Schumer (NY) and Dick Durban (Ill.). "We beat that history by keeping the Senate in Democratic control. We had a good night considering the totality of history against us and the economic challenges we inherited and worked to turn around."

All four senators continually spoke of the need to prop up the middle class and fix the economy.

Schumer went so far as to spell out the differences between the parties on how to do that.

Regardless of how it gets done, Reid and his cohorts wanted it to be totally apparent that they were completely ready to work with their Republican counterparts.

"The election last night is over; it's done," Reid said. "It's time to get down to business. We have made the message clear: We want to work with republicans. If they don't want to work with us, the American people will see that."