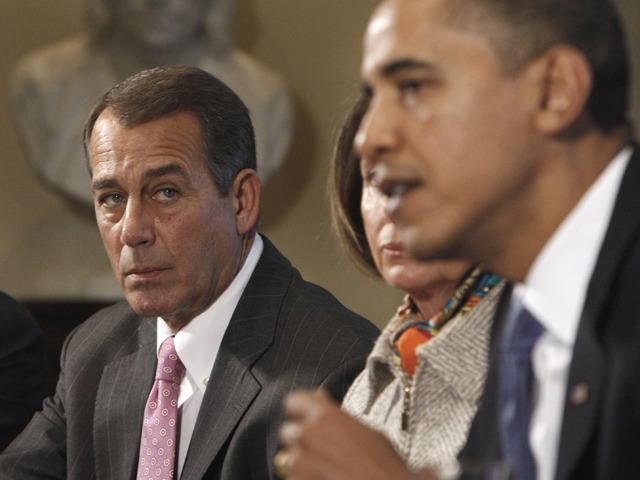 Just before his Democratic Party experienced huge losses in last night's mid-term elections, President Obama said in a radio interview that he hopes he "can cooperate with Republicans."

Just after his Republican Party earned massive gains in the House of Representatives, Kentucky Senator-elect Rand Paul--a Tea Party darling--told a throng of supporters, "We've come to take our government back."

During a press conference Wednesday, Senate Minority Leader Mitch McConnell said the Obama administration had ignored voter wishes while the American people watched the government running car, bank and insurance companies. "We hope they (Democrats) will pivot in a different direction," McConnell said.

Finding the middle ground between cooperation and a hostile take-over is a conundrum President Obama must begin to address at his afternoon press conference today, and the struggle is expected take place over health care reform and the budget.

House Speaker-in-waiting John Boehner of Ohio said after the elections were done that he believes his party was given a mandate to roll back health care reform legislation.

"The American people were concerned about the government takeover of health care," Boehner said. "I think it's important for us to lay the groundwork before we begin to repeal this monstrosity."

Many pundits believe, however, that this is a bit of political chicanery ahead of the 2012 elections.

On CBS' "The Early Show," Republican strategist Dan Bartlett told anchor Harry Smith, "The Republicans... know they won't repeal health care, but...they (may) want to take early votes to put some of these (Democratic) senators over there, who may be up the next (election) cycle, on public record once again voting in favor of health care reform. There's a lot of politics still in play."

Despite Republicans' public bluster over health care reform, they ran largely on a platform of fixing the economy as well as overhauling and reining in the federal budget, both ideas the voters really liked.

In an interview on "The Early Show," CBS News political consultant John Dickerson said, "We asked voters what the priority should be for the new congress and they were almost equally split, reducing the budget deficit, 39 percent, spending to create jobs, 37 percent."

So with two major issues that largely have the two political parties pulling in opposite directions, where can Mr. Obama go from here?

Outgoing Democratic Senator Evan Bayh of Indiana had a laundry list of suggestions in a New York Times Op-Ed this morning:

"A good place to start would be tax reform. Get rates down...simplify the code to reduce compliance costs. Democrats should ban earmarks until the budget is balanced; support a freeze on federal hiring and pay increases; offer changes to the (entitlement) system that would save hundreds of billions of dollars while preserving the safety net for our neediest; improve legislation already enacted (like) health care reform, financial regulation and other initiatives."

Just re-elected Republican Senator Jim DeMint of South Carolina--another Tea Party movement leader--also had a host of suggestions for the newest members of his party in a Wall Street Journal Op-Ed today:

"First, don't request earmarks. You will lose the ability to criticize wasteful spending. Second, hire conservative staff. The old saying "personnel is policy" is true. You don't need Beltway strategists and consultants running your office. Third, beware of committees. Committee assignments can be used as bait to make senators compromise on other matters. Fourth, don't seek titles. The word "Senator" before your name carries plenty of clout. Lastly, don't let your re-election become more important than your job. Congress will never fix entitlements, simplify the tax code or balance the budget as long as members are more concerned with their own narrow, parochial interests. Time spent securing earmarks and serving personal ambitions is time that should be spent working on big-picture reforms. When you are in Washington, remember what the voters back home want--less government and more freedom."

This does not appear to leave a lot of ground for President Obama to navigate, with leading Democrats suggesting a change in direction and leading Republicans suggesting turning the clock back.

As CBS News Democratic strategist Jamal Simmons said on The Early Show this morning, Mr. Obama is "going to have to find some way to define himself so he doesn't look like he's just falling in with the new crowd."