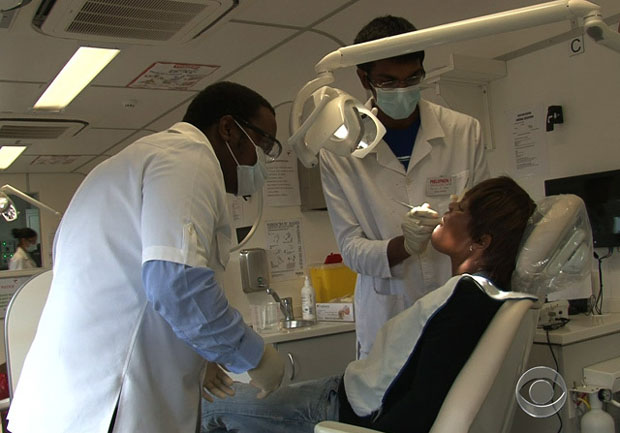 Nelson Mandela, who died Thursday at the age of 95, left a far-reaching legacy in South Africa – including a special train that bridges the health care gap in the country.

As CBS News correspondent Michelle Miller reported in 2012 from Eastern Cape, South Africa, four out of five South Africans depend on the public health care system that Mandela championed. But access remains vastly unequal between blacks and whites.

Hundreds camp out for days for a place in line. For them it's worth every uncomfortable moment to see a doctor.

"From last night I was sleeping here, it's true!" said Thelma Ngongoshe, who needs refills on her diabetes and arthritis medication. She would rather spend the night here to see a doctor on the train, than wait for months to be seen at a public hospital.

"We are so glad when we hear it is coming," Ngongoshe said. "You get care and they give you good medicines, that's why I said I must also go see them."

On average, Phelophepa treats 1,500 patients a week. Onke Mazibuko manages the operation which is funded in large part by the national railway.

"The train was given the moniker 'the train of hope' and 'the train of miracles,' said Mazibuko."And that says it all -- how people feel about the project."

The Phelophepa train made its first journey in 1994, the same year Nelson Mandela was elected South Africa's first black president. He placed the right to access health care in the nation's new constitution.

Under apartheid, in some rural areas, there was one doctor for every 40,000 black South Africans. Today, the numbers have improved to 1 in 4,000. But that doesn't mean everyone can afford a doctor's care.

Girdwood Badi needs glasses that would cost $140 in town. Here, they are just four. "It's very, very cheap ...something that I can afford to pay," he said.

The affordability is possible thanks to volunteers. Student doctors live on the train. They travel to parts of their own country they've never seen.

"It helps us to minimize that boundary between us and the rural people. We need to understand all the people's problems, even if you don't even encounter those problems yourself," said eye doctor Marga Lyell.

Thelma Ngongoshe finally saw a doctor, who prescribed her the pills she needs. She picked them up at the train's pharmacy. "I'm so happy!" she said, shaking the pill bottle.

In 2012, a second train was launched, allowing doctors to reach 100,000 people a year. Phelophepa means "good, clean health" -- and for those who receive its cargo of hope, it's lived up to its name.