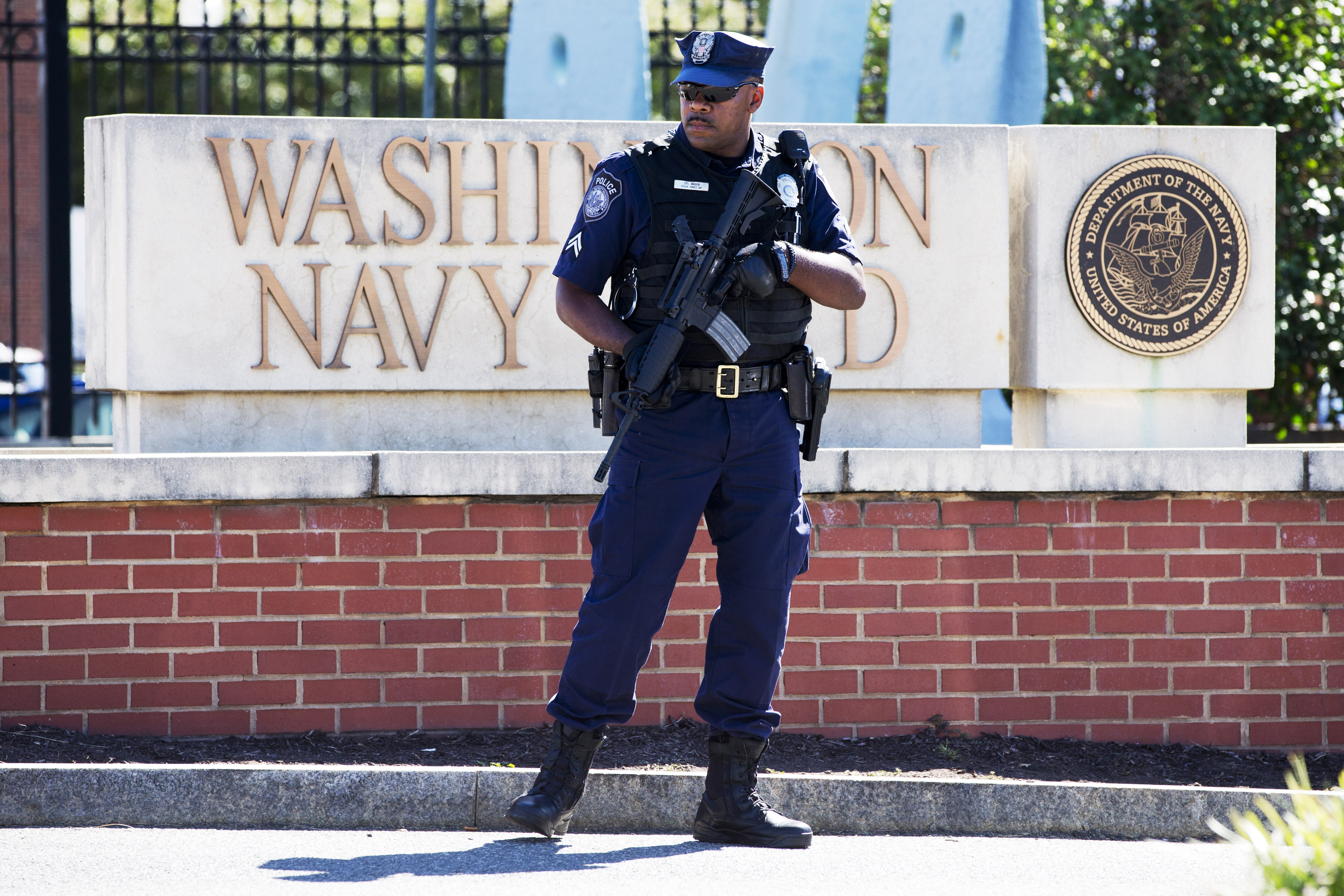 Defense Secretary Chuck Hagel intends to order a review of physical security and access at all Defense Department installations worldwide, a senior Pentagon official told CBS News, as investigators continue to search for a motive in the shooting rampage at the Washington Navy Yard that left 13 people dead, including the suspected gunman.

Hagel is collecting input from senior leaders today to define the parameters of the review, which could be formally announced as soon as tomorrow.

The suspected gunman, Aaron Alexis, used a valid pass to get into the highly secured installation Monday morning and started firing inside a building, the FBI said. He was killed in a gun battle with police.

"Mr. Alexis had legitimate access to the Navy Yard as a result of his work as a contractor and he utilized a valid pass to gain entry to the building," said Valerie Parlave, assistant director in charge of the FBI's Washington field office.

Authorities said Alexis entered the base's Building 197 with a shotgun that was legally purchased in Virginia. Alexis may have gained access to a handgun after entering the building but he did not have an AR-15 semi-automatic rifle, as had been reported initially.

Parlave said that investigators will continue to conduct interviews, probe digital media and look into Alexis' past medical and criminal activities.

CBS News special correspondent and former FBI assistant director John Miller reported it is likely Alexis was a disgruntled worker with anger management issues. Miller also said that he had sought treatment for mental health issues from the Veteran's Administration.

"He said he was hearing voices, he was detached from reality at certain points. He had sought treatment a number of times at a number of places and he was also frustrated there. He claimed he wasn't getting his full VA benefits," Miller said.

In addition to Hagel's review, Secretary of the Navy Ray Mabus on Tuesday directed a review of Navy and Marine Corps' security procedures at domestic military bases.

The motive for the mass shooting — the deadliest on a military installation in the U.S. since the attack at Fort Hood, Texas, in 2009 — was a mystery, investigators said.

While authorities attempt to build a full picture of the suspect's past, the FBI says he has no connections with domestic or foreign terrorist groups, CBS News correspondent Bob Orr reports.

Alexis had been suffering a host of serious mental problems, including paranoia and a sleep disorder, and had been hearing voices in his head, officials told the Associated Press on condition of anonymity because the criminal investigation was still going on.

He had been treated since August by Veterans Affairs, the officials said.

The Navy had not declared him mentally unfit, which would have rescinded a security clearance Alexis had from his earlier time in the Navy Reserves.

The assault is likely to raise more questions about the adequacy of the background checks done on contract employees and others who are issued security clearances — an issue that came up most recently with National Security Agency leaker Edward Snowden, an IT employee with a government contractor.

In the hours after the Navy Yard attack, a profile of Alexis began coming into focus.

A Buddhist convert who had also had flare-ups of rage, Alexis, a black man who grew up in New York City and whose last known address was in Fort Worth, Texas, complained about the Navy and being a victim of discrimination. He also had run-ins with the law over shootings in 2004 and 2010 in Texas and Seattle, and was ticketed for disorderly conduct after being thrown out of a metro Atlanta nightclub in 2008.

Alexis' bouts of insubordination, disorderly conduct and being absent from work without authorization prompted the Navy to grant him an early — but honorable — discharge in 2011 after nearly four years as a full-time reservist, authorities said. During his service, he repaired aircraft electrical systems at Fort Worth.

In addition to those killed at the Navy Yard attack, eight people were hurt, including three who were shot and wounded, authorities. Those three were a police officer and two female civilians, authorities said. They were all expected to survive.

The dead ranged in age from 46 to 73, officials said. A number of the victims were civilian employees and contractors, rather than active-duty military personnel.

Those killed included: Michael Arnold, 59, a Navy veteran and avid pilot who was building a light airplane at his home; Sylvia Frasier, 53, who worked in computer security; Kathleen Gaarde, 63, a financial analyst; and Frank Kohler, 50, a former president of the Rotary Club in Lexington Park, Md., who proudly reigned as "King Oyster" at the region's annual seafood festival.

Monday's onslaught at a single building at the Navy Yard unfolded about 8:20 a.m. in the heart of the nation's capital, less than four miles from the White House and two miles from the Capitol. It put all of Washington on edge.

"This is a horrific tragedy," Mayor Vincent Gray said.

Law enforcement officials speaking on condition of anonymity told the AP that the gunman carried an AR-15 assault rifle but did not use it. Instead, they said, he used a shotgun plus two handguns that he took from law officers at the scene.

For much of the day Monday, authorities said they were looking for a possible second attacker who may have been disguised in an olive-drab military-style uniform. But by late Monday night, they said they were convinced the shooting was the work of a lone gunman, and the lockdown around the area was eased.

"We do now feel comfortable that we have the single and sole person responsible for the loss of life inside the base today," Washington Police Chief Cathy Lanier said.

President Barack Obama lamented yet another mass shooting in the U.S. that he said took the lives of American "patriots." He promised to make sure "whoever carried out this cowardly act is held responsible."

The FBI took charge of the investigation.

The attack came four years after Army psychiatrist Maj. Nidal Hasan killed 13 people at Fort Hood in what he said was an effort to save the lives of Muslims overseas. He was convicted last month and sentenced to death.

At the time of the rampage, Alexis was an employee with The Experts, a company that was a Defense Department subcontractor on a Navy-Marine Corps computer project, authorities said.

Valerie Parlave, head of the FBI's field office in Washington, said Alexis had access to the Navy Yard as a defense contractor and used a valid pass.

The Washington Navy Yard is a sprawling, 41-acre labyrinth of buildings and streets protected by armed guards and metal detectors, and employees have to produce their IDs at doors and gates. More than 18,000 people work there.

The rampage took place at Building 197, the headquarters for Naval Sea Systems Command, which buys, builds and maintains ships and submarines. About 3,000 people work at headquarters, many of them civilians.

Witnesses on Monday described a gunman opening fire from a fourth-floor overlook, aiming down on people on the main floor, which includes a glass-walled cafeteria. Others said a gunman fired at them in a third-floor hallway.

Patricia Ward, a logistics-management specialist, said she was in the cafeteria getting breakfast.