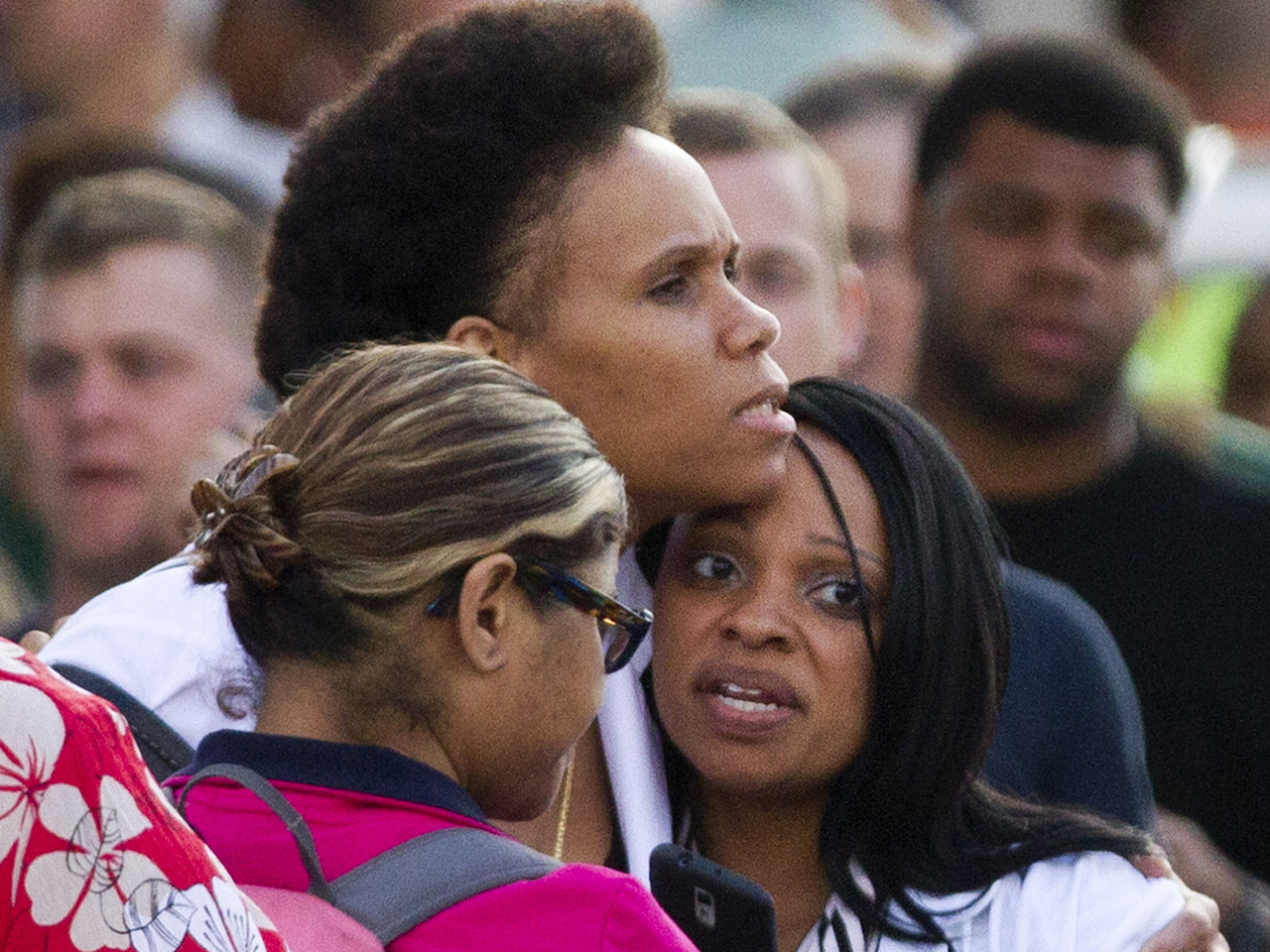 WASHINGTON An employee at a defense contractor used his pass to get into the Washington Navy Yard and went on a deadly shooting rampage Monday, spraying bullets in the hallways and firing from a balcony on workers in an atrium below. Twelve people were killed plus the gunman.

The motive for the attack — the deadliest mass shooting on a military installation in the U.S. since the tragedy at Fort Hood, Texas, in 2009 — was a mystery, investigators said.

Mayor Vincent Gray said there was no indication it was a terrorist attack, but he added that the possibility had not been ruled out.

The assault at the highly secure Navy Yard unfolded about 8:20 a.m. in the heart of the nation's capital, less than four miles from the White House and two miles from the Capitol.

The gunman, Aaron Alexis, a 34-year-old former Navy reservist whose last known address was in Fort Worth, Texas, died after a running gun battle inside the building with police, investigators said.

"We are confronting yet another mass shooting," President Obama said Monday during remarks that were intended to address the financial crisis. "And today it happened on a military installation in our nation's capital."

The shooter was discovered with a shotgun and at least one handgun and was wearing dark blue clothing, according to law enforcement officials.

Milton reports that the shotgun was traced to a gun store in Lorton, Va., according to a federal law enforcement official. The official said the shotgun was purchased at the store within the last week.

CBS News correspondent Bob Orr reports that authorities believe one of the possible sidearms found on Alexis may have come from one of the Navy Yard's security officers.

For much of the day, authorities said they were looking for a possible second attacker who may have been disguised in an olive-drab military-style uniform.

But by late Monday night, they said they were convinced the attack was the work of a lone gunman, and the security lockdown around the area was eased.

"We do now feel comfortable that we have the single and sole person responsible for the loss of life inside the base today," Washington Police Chief Cathy Lanier said.

Mr. Obama promised to make sure "whoever carried out this cowardly act is held responsible."

The FBI took charge of the investigation.

The attack came four years after Army psychiatrist Maj. Nidal Hasan killed 13 people at Fort Hood in what he said was an effort to save the lives of Muslims overseas. He was convicted last month and sentenced to death.

In addition to those killed, eight people were hurt — three of them shot and wounded, according to the mayor. Those three were a police officer and two female civilians, authorities said. They were all expected to survive.

A number of the victims were civilian employees and contractors, rather than active-duty military personnel, the police chief said.

At the time of the rampage, Alexis was an information technology employee with The Experts, a company that was a Defense Department subcontractor on a Marine computer project, authorities said.

Valerie Parlave, head of the FBI's field office in Washington, said he had legitimate access to the base as a defense contractor and used a valid pass.

Alexis had been a full-time Navy reservist from 2007 to early 2011, leaving as a petty officer third class, the Navy said. It did not say why he left. He had been an aviation electrician's mate with a unit in Fort Worth.

A convert to Buddhism who grew up in New York City, Alexis had had run-ins with the law over shooting incidents in 2004 and 2010 in Fort Worth and Seattle and was portrayed in police reports as seething with anger.

Witnesses on Monday described a gunman opening fire from a fourth-floor overlook, aiming down on people on the main floor, which includes a glass-walled cafeteria. Others said a gunman fired at them in a third-floor hallway.

Patricia Ward, a logistics-management specialist, said she was in the cafeteria getting breakfast.

The Washington Navy Yard is a sprawling, 41-acre labyrinth of buildings and streets protected by armed guards and metal detectors, and employees have to show their IDs at doors and gates. More than 18,000 people work there.

The rampage took place at Building 197, the headquarters for Naval Sea Systems Command, which buys, builds and maintains ships and submarines. About 3,000 people work at headquarters, many of them civilians.

Todd Brundidge, an executive assistant with Navy Sea Systems Command, said he and co-workers encountered a gunman in a long hallway on the third floor. The gunman was wearing all blue, he said.

Terrie Durham, an executive assistant with the same agency, said the gunman fired toward her and Brundidge.

"He aimed high and missed," she said. "He said nothing. As soon as I realized he was shooting, we just said, 'Get out of the building."'

As emergency vehicles and law enforcement officers flooded streets around the complex, a helicopter hovered, nearby schools were locked down and airplanes at nearby Reagan National Airport were grounded so they would not interfere with law-enforcement choppers.

Security was tightened at other federal buildings. Senate officials shut down their side of the Capitol while authorities searched for the potential second attacker. The House remained open.

In the confusion, police said around midday that they were searching for two men who may have taken part in the attack — one carrying a handgun and wearing a tan Navy-style uniform and a beret, the other armed with a long gun and wearing an olive-green uniform. Police said it was unclear if the men were members of the military.

But as the day wore, police dropped one person and then the other as suspects.

As tensions eased, Navy Yard employees were gradually released from the complex, and children were let out of their locked-down schools.

Adm. Jonathan Greenert, chief of naval operations, was at the base at the time the shooting began but was moved unharmed to a nearby military installation.

Anxious relatives and friends of those who work at the complex waited to hear from loved ones.

Tech Sgt. David Reyes, who works at Andrews Air Force Base, said he was waiting to pick up his wife, Dina, who was under lockdown in a building next to where the shooting happened. She sent him a text message.

EDITORS NOTE: CBS News incorrectly identified the suspected shooter in earlier reports. Read this piece for an explanation of the initial confusion.