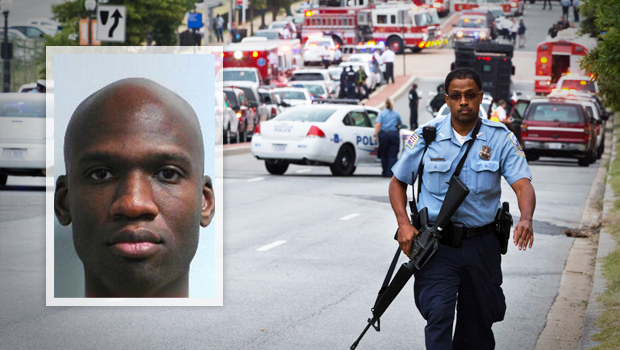 Updated at 11:25 a.m. ET with clarification on the weapons found at the scene.

CBS News special correspondent and former FBI assistant director John Miller reports there are no indications that the suspect was self-radicalized. Rather, it is likely he was a disgruntled worker with anger management issues. Miller also said that he had sought treatment for mental health issues from the Veteran's Administration.

"The indications are [that] he was a government worker with a secret clearance who was a devout Buddhist," Miller said on "CBS This Morning."

"There were mental issues that he sought help for from the VA a number of times. He was ... acting normally during work and then having these episodes for which he was trying to get treatment."

"He said he was hearing voices, he was detached from reality at certain points. He had sought treatment a number of times at a number of places and he was also frustrated there. He claimed he wasn't getting his full VA benefits," Miller said.

Investigators believe he carried out the attack with a shotgun, and apparently acquired one, possibly two, handguns during the incident. Law enforcement sources said Monday that an AR-15 assault rifle was found at the scene, but authorities now do not believe Alexis used an assault rifle in the attack. The shotgun was recently purchased at a gun store in Lorton, Va., CBS News' Bob Orr reports.

The timing of the firearms purchase is "key" according Miller because "it shows when he went through the 'I'm angry' stage to the 'I'm planning' stage" in the days before the attack.

Alexis served in the Navy Reserves from 2007 to 2011 before receiving an honorable discharge.

"A Navy person told us, he had a 'pattern of misconduct,'" Orr reported, "He eventually left the military in 2011, took work as a contractor and retained his secret clearance."

Federal agents are still asking the public to fill in the information gaps and the FBI spent Monday night "sorting through calls from acquaintances, former friends, coworker, fellow students ... who were able to fill in the details." What emerged, Miller said, was a "richer picture of a man who was leading two lives."

As recently as last week, Alexis was just "an individual who came to work every day last week at building 197 -- the same building [where] he conducted a massacre yesterday -- wiring up cubicles for an IT refresh," Miller said.

"Coworkers said they got along with him fine, he seemed perfectly normal," Miller said, "He said he'd been in the military, was now a contractor, but was looking to go back into the military."

However, there were signs of his so-called mental and anger management issues before the shooting, as recently as last week.

"He had an incident with a supervisor where they criticized his work on one of the installations and he didn't seem to take that well," Miller said.

In 2004, Alexis was arrested for malicious mischief in Seattle, Wash., and in 2010, for discharging a firearm into the ceiling of his Fort Worth, Tex., apartment. However, neither arrest led to a prosecution that would have limited him from buying the firearms he purchased in Virginia.

"One arrest was for discharging a firearm in a public place, the other was malicious mischief. That's what he was arrested for. ... The things that are going to prevent you from getting a gun -- and neither one of those would have -- only result from convictions and. ... Neither one of those was prosecuted," Miller said.

The FBI says they do not yet have a full picture of the suspect's past but say he has no connections with domestic or foreign terrorist groups.