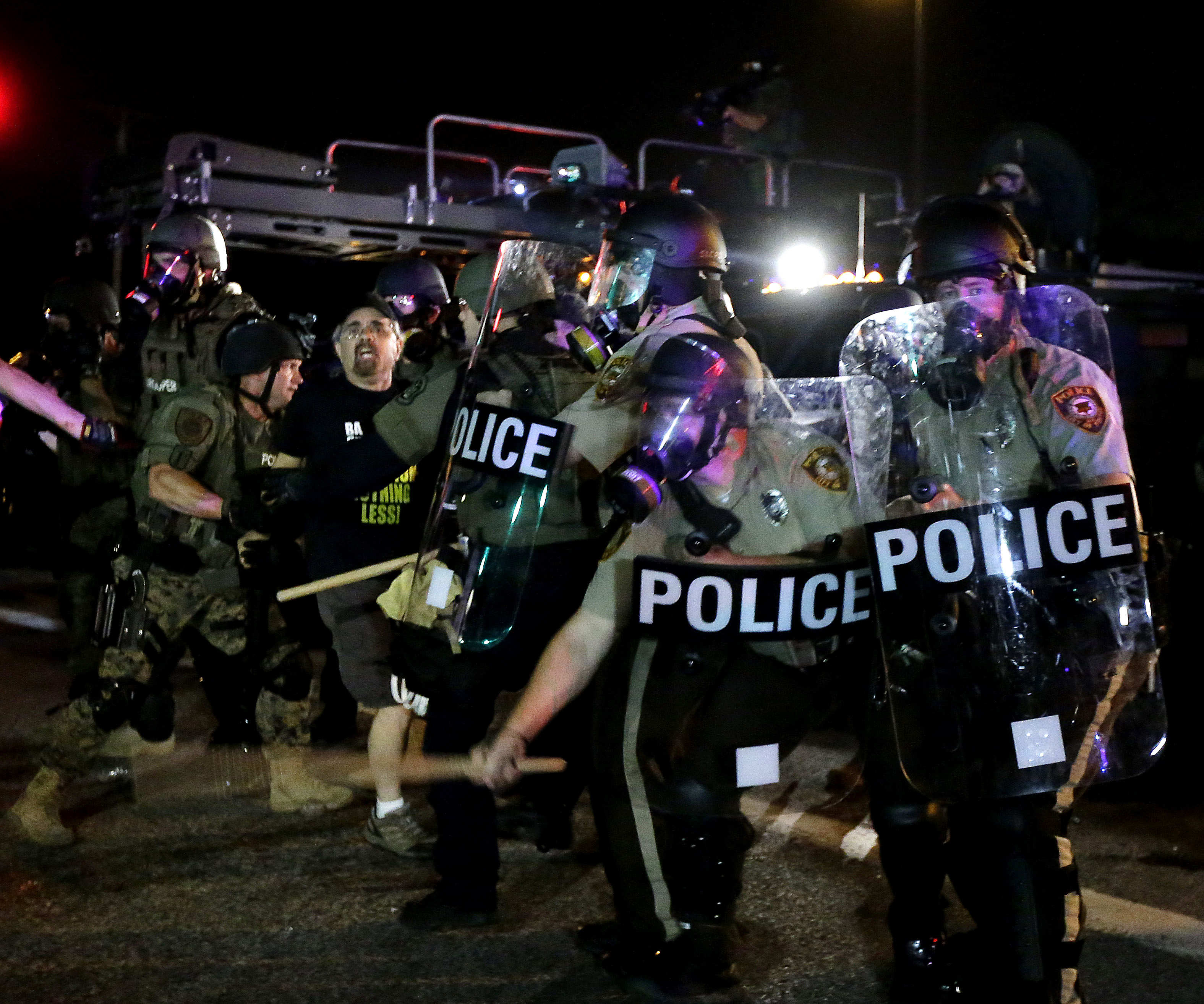 Demonstrators and police were locked in a confrontation late Monday as tear gas was fired at crowds who reportedly refused to disperse from the streets of Ferguson, Missouri. Tactical units and armored vehicles began to move in as the situation deteriorated.

Sheriff's deputies in body armor and state troopers carrying wooden bats and gas masks stood watch over the group. The streets of Ferguson remained crowded and active with few incidents through the day on Monday. By sundown, more protests began to take place and larger crowds began to gather, attracting more police presence. As midnight closed in a scene of chaos ensued.

Missouri National Guard troops began to assemble earlier Monday at a location not far from the epicenter of protest activity in Ferguson. The guardsmen have moved into town based on an order from Gov. Jay Nixon in order to return order after several nights of unrest in the wake of the police shooting of 18-year-old Michael Brown.

The guard falls under the command of the Missouri State Highway Patrol, which was placed in charge of security last week. They will be responsible, at least initially, for guarding the police staging area.

Two men were arrested for disorderly conduct and failure to disperse, police said. A photographer for the Getty photo agency was arrested while covering the demonstrations and later released. Authorities were also establishing a designated protest zone for nightly demonstrations.

The plan was announced Monday by St. Louis County police. It was not clear what would happen to those who refuse to use the area along West Florissant Avenue, where the majority of protests have occurred.

Although a curfew ordered by Gov. Jay Nixon was lifted in Ferguson on Monday night, police told protesters that they could not assemble in a single spot, saying they had to keep moving. In federal court, a judge denied a request from the American Civil Liberties Union for a restraining order that would have prevented authorities from enforcing the rule. And police said that two men were arrested for disorderly conduct and failure to disperse.

Earlier Monday, activists from groups like the Nation of Islam and the New Black Panther Party worked on quelling tensions that have led to violence over the past several nights.

The activists called for demonstrators to clear areas that had been a hotbed of activity and led to police firing tear gas, reports of molotov cocktails being thrown and arrests.

Among the main items to come up are the results of an independent autopsy conducted by pathologists hired by Brown's family.

The independent autopsy determined that Michael Brown was shot at least six times, including twice in the head, the family's lawyers and hired pathologists said.

Witnesses have said Brown's hands were above his head when he was repeatedly shot by an officer Aug. 9 in Ferguson.

But the incomplete nature of the private autopsy done for the Brown family means it likely won't be considered by prosecutors, CBS News correspondent Bob Orr reports.

The St. Louis County medical examiner's autopsy found that Brown was shot six to eight times in the head and chest, office administrator Suzanne McCune said Monday. But she declined further comment, saying the full findings were not expected for about two weeks.

The Justice Department announced that it would conduct its own autopsy of Brown's body as part of a federal investigation into Brown's death. Also President Obama announced that Attorney General Eric Holder would be dispatched to Ferguson later this week. More than 40 FBI agents are on the ground doing interviews and collecting evidence.

The unrest that has taken place over the past eight days, many in the Ferguson community say is not on the part of peaceful demonstrators, but rather comes from outsiders bent on agitating the marches.

"Those people who are smashing stores, those people are from different sides, from the south side," Tony Davis told CBS News correspondent Mark Strassman. "Those are the people coming for that purpose,to steal, to take advantage of the situation and that's not right."

A grand jury could begin hearing evidence Wednesday to determine whether the officer who shot Brown, Darren Wilson, should be charged in the teen's death, said Ed Magee, spokesman for St. Louis County's prosecuting attorney.