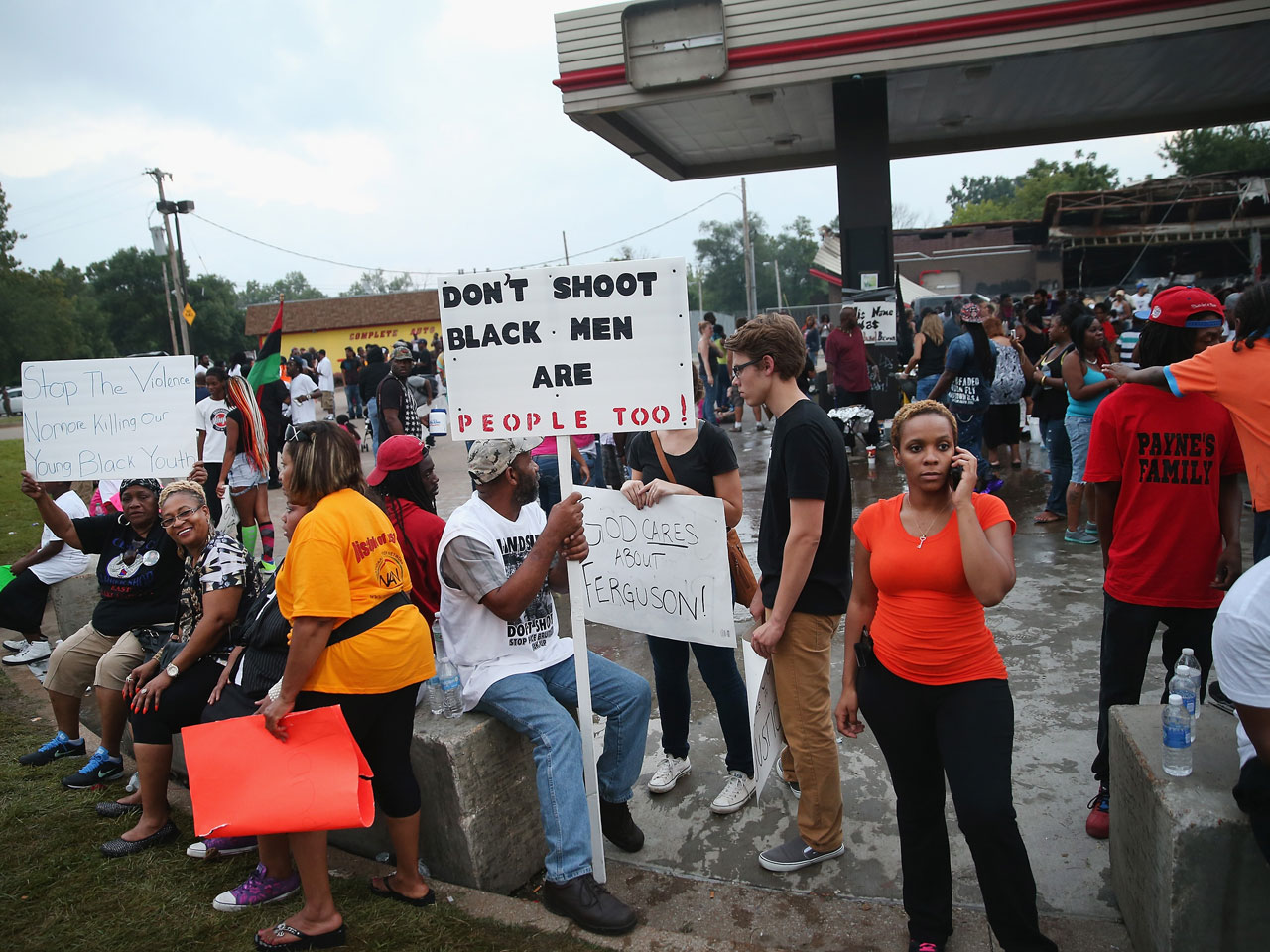 FERGUSON, Mo. - As the governor of Missouri announced he was lifting a two-day-old overnight curfew for local residents, police in the St. Louis suburb where a white officer fatally shot an unarmed black teen are enforcing an order against static assembly.

Authorities have been seen Monday urging people to keep moving and avoid standing in one place. Journalists who gathered by midday at a burned-out convenience were also being dispersed.

Officers say the order is not meant to disperse the protesters but to keep people moving.

Officers say the order came from the Missouri State Highway Patrol, which has assumed command of crowd-control measures since the killing of Michael Brown sparked days of protests in the city.

A state of emergency has been in place since Saturday.

Gov. Jay Nixon also called in the National Guard Monday to help restore order against what he described as "a violent criminal element intent upon terrorizing the community."

"The Guard's immediate and limited responsibilities ... are to provide protection, and ensure the safety of our Unified Command Center, which was the target last night of a coordinated attack," Nixon said in a statement.

Police used tear gas to clear protesters off the streets late Sunday, a week after demonstrations over the fatal shooting of 18-year-old Michael Brown.

Missouri State Highway Patrol Capt. Ron Johnson, whose agency was put in charge of security in Ferguson by Nixon, told reporters early Monday that police had to respond after shots were fired at them and others and several locations were looted or vandalized, including a McDonald's where employees felt the need to lock themselves in a storage room for their safety.

Johnson said Molotov cocktails, bottles and other objects were thrown at police.

At least two injuries resulted from the gunshots, Johnson said, but no officers were hurt. Several people were arrested.

Johnson blamed the latest trouble on a small group of people intent on causing it.

Three hours before a midnight curfew imposed by Nixon, officers in riot gear ordered all the demonstrators to disperse. Many of the marchers retreated, but a group of about 100 stood defiantly about two blocks away until getting hit by tear gas.

Protesters laid a line of cinder blocks across the street near the QuikTrip convenience store that was burned down last week. It was an apparent attempt to block police vehicles, but the vehicles easily plowed through. Someone set a nearby trash bin on fire, and gunshots rang out several blocks away.

Within two hours, most people had been cleared off West Florissant Avenue, one of the community's main thoroughfares. The streets remained empty as the curfew began. It remained in effect until 5 a.m.

Much of the anger shown by protesters in Ferguson has been over what has been seen as a lack of openness by police about the Brown shooting.

Police have said little about the encounter between Brown and the officer, except to say that it involved a scuffle in which the officer was injured and Brown was shot. Witnesses say the teenager had his hands in the air as the officer fired multiple rounds.

On Monday, the Brown family's attorneys released the results of a private autopsy that they paid to have conducted. The state of Missouri has also conducted an autopsy but hasn't revealed the results yet, and it was announced Sunday the federal government will also be conducting its own autopsy.

The private autopsy revealed that Brown had been shot at least 6 times, and a pathologist hired by the family said a bullet wound to his arm may have happened when he put his hands up, "but we don't know."

Forensic pathologist Shawn Parcells said a graze wound on Brown's right arm could have occurred in several ways. He says the teen may have had his back to the shooter, or he could have been facing the shooter with his hands above his head or in a defensive position.

The two likely kill shots against Brown hit him in the head, the pathologists said. One of the family's attorneys, Darryl Parks, said the fact that one of the kill shots hit him in the top of the head at a "back-to-front" trajectory means "the officer should've been arrested."

"Why would he have been shot in the very top of his head, a 6-foot-4 man? It doesn't make sense," Parks said.

Dr. Lawrence Koblinsky, a forensic science expert and a professor at John Jay College of Criminal Justice, told "CBS This Morning" it was important to note where exactly Brown was first shot.

"It's my opinion that seeing four shots to the right arm was an indication to me that the police officer wanted to stop him," Koblinsky said.

However, Koblinsky added later that "six shots is five shots too many," because officers should be better trained at stopping suspects without lethal force.