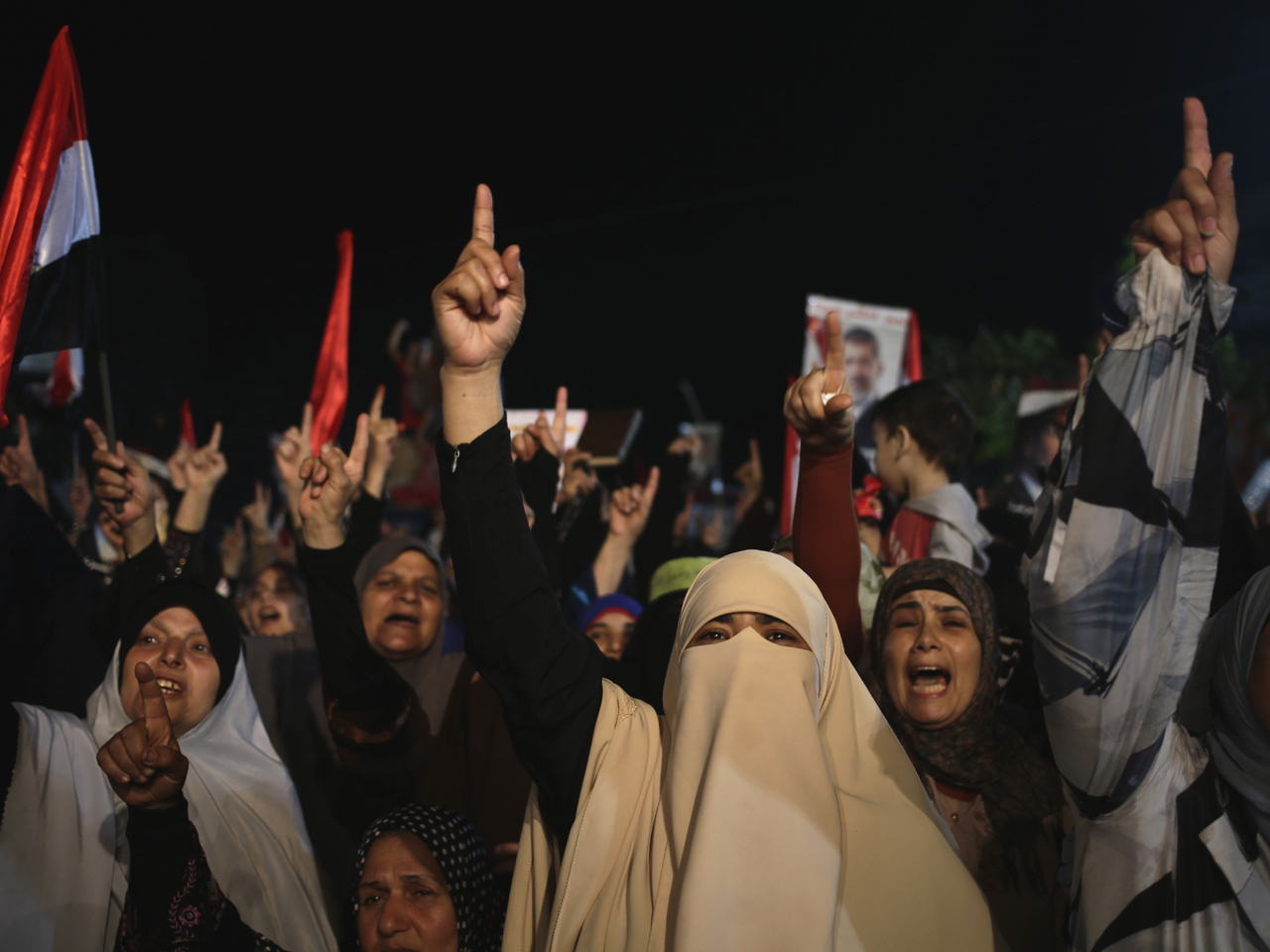 CAIRO Egypt's military-backed government offered protection Thursday to supporters of deposed President Mohammed Morsi who end their two sit-ins — widely seen as a first step toward dispersing the vigils on opposite sides of Cairo.

But the protesters responded defiantly: "Over our dead bodies!"

The standoff underscored the ongoing political crisis since the armed forces toppled Egypt's first democratically elected leader on July 3: thousands in the streets demanding Morsi's reinstatement, a government unable to exert its authority, and recurrent violence that has killed more than 260 people.

Rights groups, activists and politicians from rival camps, fearful of more bloodshed, tried to ward off any use of force, including a suggestion of putting a human chain around the protest sites.

International pressure grew for the interim government to release Morsi and create a process that includes his Muslim Brotherhood, Egypt's largest political faction, which refuses to deal with the new authorities.

Despite a government warning that it would disperse the vigils, the Brotherhood and its supporters announced plans to organize new mass marches Friday, dubbed "Egypt Against the Coup."

Organizers of the sit-ins outside the Rabaah al-Adawiya Mosque in eastern Cairo and a smaller one near Cairo University's main campus in Giza say the protests are signs of the enduring support for the once-dominant Muslim Brotherhood.

But mass rallies called by the military leader, Gen. Abdel-Fattah el-Sissi, on July 26 showed that a large segment of Egypt's population backs the armed forces' actions against Morsi. He was overthrown following demonstrations by millions who demanding that he step down after a year in office.

U.S. Secretary of State John Kerry picked up that theme, telling Geo TV in Pakistan that the military was "restoring democracy." He added that millions of people had asked the army to intervene because they were afraid Egypt would descend into violence.

British Foreign Secretary William Hague spoke to interim Vice President Mohammed ElBaradei, calling for a peaceful resolution to the crisis. "I also called for the release of all political detainees, including Dr. Morsi, unless there are criminal charges to be made against them," he said.

There was no sign of a break in the stalemate.

Security officials, pro-military media and some residents near the sit-in sites increasingly view the encampments as a menace, with authorities accusing protesters of stockpiling arms, torturing and killing suspected intruders, and scuffling with locals who voice complaints.

While the protesters insist their gatherings are peaceful, the sit-ins have taken on increasingly fatalistic religious overtones, and many of Morsi's supporters have expressed readiness to die for their cause — defending him and Islam.

The only sign of security activity before sunset Thursday was an army helicopter that flew low over the protesters.

"The Interior Ministry ... calls on those in the squares of Rabaah al-Adawiya and Nahda to listen to the sound of reason, side with the national interest, and quickly leave," Interior Ministry spokesman Hany Abdel-Latif said in a televised address.

"Whoever responds to this call will have safe passage and protection," he added.

The declaration followed a Cabinet decision Wednesday to charge the Interior Ministry, which controls the police, to disperse the sit-ins, arguing they posed a threat to national security and terrorized citizens.

From the podium outside the Rabaah al-Adawiya Mosque, one speaker shouted, "Did you see that the criminal army wants to break up the sit-in? Over our dead bodies!"

The crowd shouted in agreement: "The coup is terrorism!"

The protesters fortified the site, piling up sandbags at its six entrances and adding new guards who stood on alert with their helmets and sticks, sometimes climbing over the gates to check for movement. At one entrance, a second wall of concrete blocks, sandbags and tires was erected.

Medhat Ali, a teacher guarding the gates, said lines of men near the fences will be the first to warn of an impending attack.

"If they see military or police, they will alert us, and in no time the masses inside will pour in to sleep on the asphalt under their vehicles and troops," he said proudly. "We have nothing but some stones and our bare chests. We all have bid our families farewell. We will die here — or Morsi returns."

Another protester, Magdi Shalash, dismissed the Interior Ministry warning, calling it an attempt to scare away supporters.

"This warning is like nothing. It is like air. We don't even listen to it," said Shalash, a university professor. "We will only leave as dead bodies."

Rally speakers and leading members of the Brotherhood urged more people to join the protest. In a video posted on the Brotherhood's Facebook page, Mohammed El-Beltagi urged those at home to "join us and get the honor of martyrdom."

An influential ultraconservative cleric gave an emotional appeal to authorities to avoid violence, which he said will only lead to a cycle of bloodshed.

"It is foolish to believe that the problem will end in one night and the conflict resolved in one battle," Mohammed Hasaan, said in a 17-minute recording made in a mosque and aired on Al-Jazeera Mubasher Misr, a pro-Brotherhood broadcaster.

"Beware of blood. It will be a curse on those who shed it. The military entering a conflict with Islamists is a loss for it and a real win for the Jews," he said, a reference to Israel.

A military spokesman said its troops are not taking part in the moves against the sit-ins.

Egyptian police have a track record of deadly crackdowns on street protests, and Wednesday's Cabinet move effectively gave security forces the mandate to act as they see fit.

The Interior Ministry had said earlier it would not clamp down on the protesters but will take gradual measures, including warnings and the use of water cannons and tear gas to minimize casualties.

The U.S. Embassy said it will be closed Sunday — a normal working day. The U.S. State Department said it was shuttering its embassies and consulates throughout the Muslim world Sunday after receiving an unspecified threat. State Department spokeswoman Marie Harf cited information indicating a threat to U.S. facilities overseas and said some diplomatic offices may stay closed for more than a day.

CBS News correspondent David Martin reports Thursday that U.S. intelligence has picked up signs of an al Qaeda plot against American diplomatic posts in the Middle East and other Muslim countries. The intelligence does not mention a specific location, which is why all embassies that would normally be open on Sunday have been ordered to close. That includes embassies and consulates in the Middle East, North Africa, and South Asia, where Sunday is the start of the work week.

Members of rights groups, joined by activists, organized a visit to the sit-in in eastern Cairo to inspect the place, but it ended abruptly when it descended into a political argument.

In a Facebook post, Seif Abdel-Fattah, a former Morsi adviser, called on all national groups and rights organizations to "go down and encircle (the two sit-ins) with human chains to stop the flood of blood."

Meanwhile, a leading member of Tamarod, or Rebel — the campaign that spearheaded the petition for Morsi to step down — said it suggested that law enforcement officials inspect the squares to ensure there are no weapons. But Mahmoud Badr said his proposal was rejected by the pro-Morsi groups.

Late Thursday, a high-level African Union delegation visited the sit-in in eastern Cairo. The delegation had met on Tuesday with Morsi in a secret military facility where he has been detained since his ouster on July 3.

Privately, the Rabaah protesters acknowledge that their sit-in is their last bargaining chip against the military and loyal media that label the encampment as a launching pad for terrorists.

Islamic militants also have been stepping up attacks against security forces in lawless areas in the Sinai Peninsula, raising fears that extremists could exploit the anger over Morsi's removal to spread insurgency.

The Brotherhood has long been one of the most powerful political forces in Egypt, even during its decades in the opposition to autocratic leader Hosni Mubarak, himself ousted in a popular uprising in 2011. But after a series of election wins, including Morsi's narrow victory last year, the group has fallen from favor.