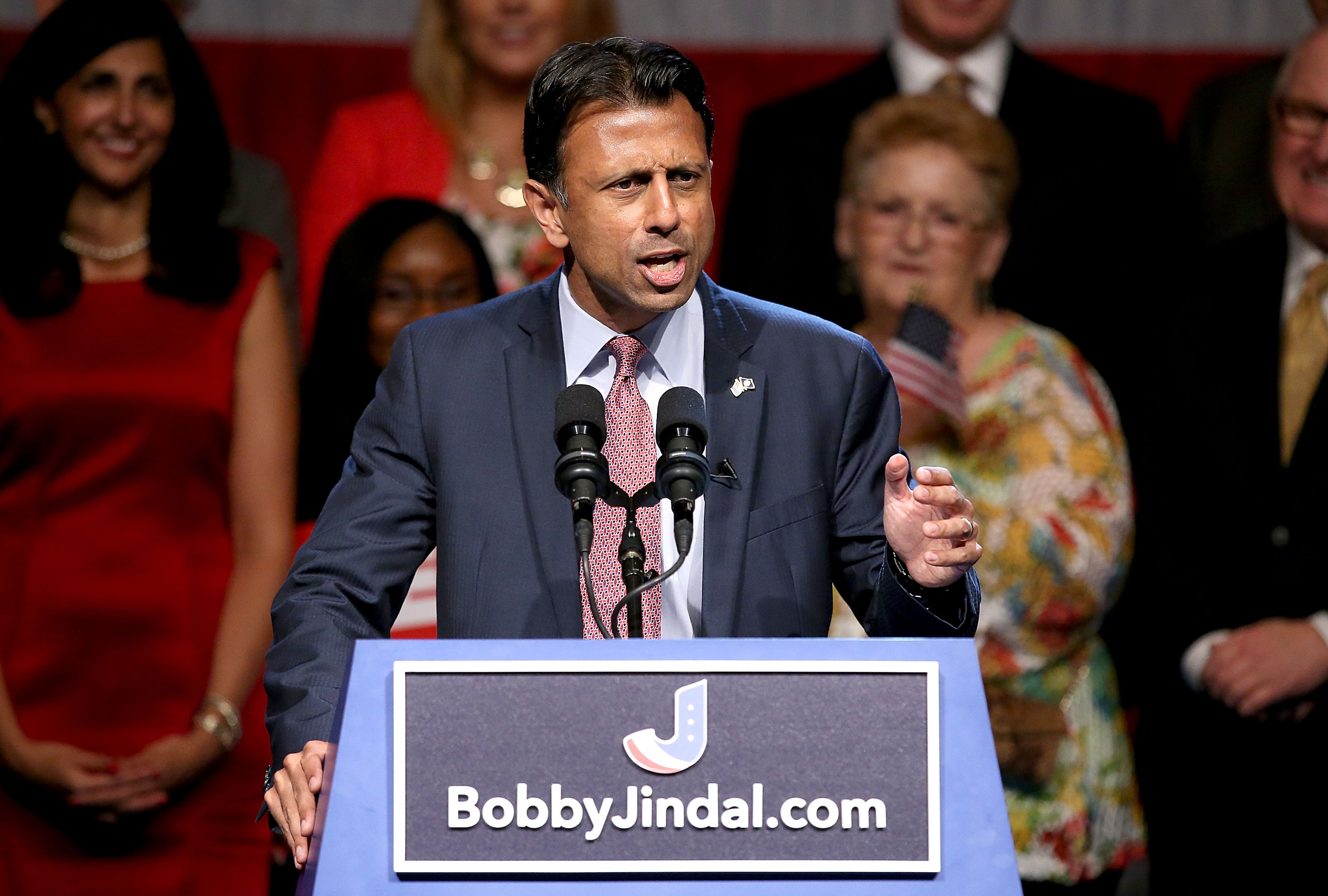 Several U.S. governors are threatening to halt efforts to allow Syrian refugees into their states in the aftermath of the terrorist attacks in Paris, and at least eight have signaled opposition to accepting refugees.

The governors are responding to heightened concerns that terrorists might use the refugees as cover to sneak across borders. One of the attackers in Paris had a Syrian passport, and the Paris prosecutors' office says fingerprints from the attacker match those of someone who passed through Greece in October.

Seven of the eight terrorist suspects from the attack, however, were European and only one is thought to be from Syria.

Some Republican presidential candidates have also called for the United States to halt its Syrian refugee policy. Republican presidential candidate Jeb Bush told "CBS This Morning" on Monday that the U.S. should focus on creating safe havens for Syrian refugees in the region rather than bringing them to the U.S., and that there is a "special important need" to help Syrian Christians.

"There should be really thorough screening [of refugees coming to the U.S.] and we should focus on creating safe havens for refugees in Syria rather than bringing them all the way across to the United States," Bush said. "But I do think there is a special important need to make sure that Christians from Syria are being protected because they are being slaughtered in the country and but for us who? Who would take care of the number of Christians that right now are completely displaced?"

Millions of Syrians have fled to neighboring Middle Eastern countries and Europe, and the Obama's administration has pledged to accept about 10,000 Syrian refugees in the next 12 months. The U.S. State Department said the refugees would be spread across the country.

Even so, Republican presidential candidates have criticized the plan.

Here's a look at where some states stand:

Fellow Republican Gov. Robert Bentley announced Sunday that he would refuse Syrian refugees relocating to the state, saying: "I will not stand complicit to a policy that places the citizens of Alabama in harm's way."

Bentley's news release said the Alabama Law Enforcement Agency was diligently working with federal officials to monitor any possible threats. There has been no credible intelligence of terror threats in Alabama so far, according to the governor's office.

Gov. Doug Ducey is calling for an immediate halt to the placement of any new refugees from the Middle East.

Ducey made it clear that the state is within its legal rights to do so, saying that he is invoking the state's right under federal law to immediately consult with U.S. officials on any new refugee placements.

He also wants Congress to change the law to give states more oversight over refugee placement. Ducey says national leaders must react to protect its citizens.

Governor Rick Scott wrote in a letter to Speaker Paul Ryan and Senate Majority Leader Mitch McConnell that his state would not accept any requests to relocate Syrian refugees.

Beyond that, he said Congress should pass legislation that would block funding for the relocation of refugees to Florida.

"As the federal elected body that exercises oversight and authorizing federal spending, please take any action available through the powers of the United States Congress to prevent federal allocations toward the relocation of Syrian refugees without extensive examination into how this would affect our homeland security," Scott wrote in the letter.

Georgia Gov. Nathan Deal says the state will not accept Syrian refugees, joining leaders of other states who have made similar statements.

Deal, a Republican, says he issued an executive order on Monday directing state officials to prevent resettlement of Syrian refugees in Georgia.

Deal said he took the step "in light of" Friday's terrorist attacks in Paris. It's unclear whether governors have the legal authority to institute such bans.

Deal's statement called on President Barack Obama to suspend the refugee resettlement program in the United States. He also asked the administration to work with Georgia officials to confirm the backgrounds of 59 Syrian refugees already resettled.

Deal has previously argued that Georgia accepted too many refugees for its size and asked the Obama administration to limit new resettlements.

Gov. C.L. "Butch" Otter has joined a growing number of Republican governors calling for the immediate halt of resettling new refugees until vetting rules can be reviewed and state concerns about the program can be addressed.

Governor Bruce Rauner said in a statement that the state will "temporarily suspend" its program to accept any new Syrian refugees until the Department of Homeland Security conducts a full review of the security process.

Gov. Mike Pence says he is telling all state agencies to suspend the resettlement of additional Syrian refugees in Indiana following the deadly attacks in Paris.

Pence issued a statement Monday saying he was putting all resettlements on hold until assurances from the federal government that proper security measures have been met. He says Indiana has a long tradition of opening its arms and homes to refugees, but as governor it's his first responsibility to ensure the safety and security of Indiana residents.

Republican Gov. Sam Brownback issued an executive order Monday directing that no state agency, or organization receiving grant money from the state, shall participate or assist in the relocation of Syrian refugees.

Kentucky's incoming Republican governor has joined governors of several states in opposing the resettlement of Syrian refugees. Republican Gov.-elect Matt Bevin's stance is at odds with Kentucky's current governor. Democratic Gov. Steve Beshear says Kentucky should do "the Christian thing" and welcome all refugees who have passed extensive background checks.

Gov. Bobby Jindal -- a GOP presidential contender - announced Monday that he would work to stop the relocation of Syrian refugees to Louisiana.

Earlier, Jindal said he wanted more information from the White House "in hopes that the night of horror in Paris is not duplicated here." Jindal sent a letter to the White House on Saturday, demanding to know how many Syrian refugees have been resettled in his state.

Governor Paul R. LePage called President Obama's decision to allow 10,000 Syrian refugees into the U.S. within the next year "irresponsible."

"Unfortunately, we do not know for certain if Maine has any Syrian refugees at this time," LaPage said in a radio address. "While the President has expressed confidence in the U.S. screening process, some have pointed out the gaping holes in our immigration policy."

He said Maine would "work with law enforcement and other agencies to assist the federal government on immigration matters."

Massachusetts Gov. Charlie Baker says he's opposed to allowing more Syrian refugees into Massachusetts in the aftermath of the terrorist attacks in Paris.

The Republican said Monday the safety and security of the people of Massachusetts are his first priority and he would have to know a lot more about the federal government's refugee vetting process before allowing them into the state. Democratic Boston Mayor Marty Walsh echoed Baker, saying he also wants to know more about how the federal government screens refugees.

Gov. Rick Snyder had bucked many fellow Republican leaders by welcoming refugees to Michigan, which has a large Arab-American population.

But he said Sunday that the state is postponing efforts to accept refugees until federal officials fully review security procedures and clearances. Snyder said that while he is proud of the state's history of immigration, its "first priority is protecting the safety of our residents."

Mississippi Gov. Phil Bryant says he will "do everything humanly possible" to stop the federal government from putting any Syrian refugees in the state. Bryant says bringing them to the U.S. is "misguided" and "extremely dangerous."

Gov. Steve Bullock said Monday the state "will not allow any terrorist organization to intimidate us into abandoning our values."

State officials are reviewing the existing protocols for considering refugee settlement requests and if there are any safety concerns, the refugees will be denied, he said.

Gov. Pete Ricketts says he does not want Syrian refugees resettling in Nebraska until the federal government conducts a full review of its screening procedures to ensure public safety. The Republican sent a letter Monday to refugee resettlement agencies in the state, urging them not to pursue resettlement of the refugees in light of the terrorist attacks in Paris.

Governor Maggie Hassan said she believes the federal government should halt acceptance of refugees from Syria "until intelligence and defense officials can assure that the process for vetting all refugees, including those from Syria, is as strong as possible to ensure the safety of the American people.

They were a complete reversal from September, when the Republican presidential contender said U.S. should "play their role" in taking in refugees without committing to a specific number after a photograph of a dead migrant child humanized the migrant influx.

Gov. Susana Martinez says she's opposed to the Obama administration's plan to accept any more Syrian refugees until there's a clear plan in place to properly vet and place them.

Martinez, the nation's only Latina governor and a leader within the Republican Governors Association, says the top priority should be safety.

Governor Pat McCrory said his state will refuse taking in Syrian refugees after the terrorist attacks in Paris.

At a press conference on Monday, he said the U.S. needs to "learn exactly who these people are, what their backgrounds are."

While he said he empathizes with the refugees, he said, "What worries me is some of these people could be ISIS."

Gov. Nikki Haley says she supports allowing persecuted immigrants to come to South Carolina -- as long as they're not from Syria.

Republicans in the state Legislature called on Haley to oppose all international refugees. But the Republican governor said as long as nothing changes in who is being resettled in the state, neither will her stance.

Gov. Bill Haslam says he is asking the federal government to suspend placement of Syrian refugees in Tennessee. In a statement released to media on Monday, Haslam acknowledges that the federal government has the authority to place refugees but states, "They have said in the past they would be open to cooperating with receiving states

Gov. Greg Abbott on Monday ordered Texas' refugee resettlement program not to accept any more Syrians in the wake of the Paris terrorist attacks

In a letter to Obama, the Republican also urged scrapping federal plans to accept more Syrian refugees into the country as a whole. He said the federal government can't perform "proper security checks" on Syrians.