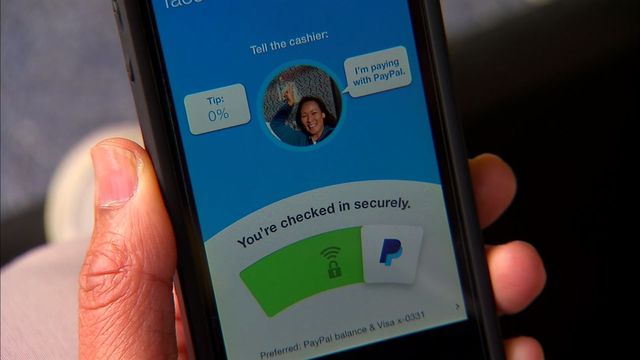 Most people don't leave home these days without their wallet and their cellphone. But what if you could leave one behind and still have everything you need?

Tech companies are working to turn your smartphone into a mobile wallet, to let you pay with just a tap or swipe. Google, Amazon and carriers like Verizon and AT&T offer a range of mobile wallet services. And Apple is rumored to be developing a mobile wallet that may be incorporated in the iPhone 6.

Meanwhile, the payment service PayPal has been testing its mobile payment app at music festivals, where not having to carry a traditional wallet can be particularly convenient.

At San Francisco's three-day Outside Lands music festival this month, some festival goers skipped the ATM lines and did not worry about digging out cash or losing their wallets. Instead, they used the Paypal app to pay with their smartphones.

Once you download the app and link a credit card and picture, you're ready to shop with participating merchants.

"Your financial information is never shared," Anuj Nayar, Senior Director of Global Initiatives at PayPal, told CNET's Kara Tsuboi. "There's nothing that can be hacked that goes over the airwaves."

However, the widespread adoption of mobile wallets is still a distant prospect right now.

"Paypal is a nice convenience for those who want to preserve the greens and not have to stop at an ATM every few minutes, but I think it's mostly going to be cash here," said Nate Pollak, who owns the American Grilled Cheese Kitchen. He says his company will sell up to seven-thousand sandwiches at the festival, but only about two-percent of the sales will be through Paypal.

"Unfortunately, we can't make the entire festival cashless right now due to connectivity," said Bryan Duquette, a festival organizer of Another Planet Entertainment. "That's obviously one of the biggest problems when you have a congregation of so many people."

Two service members struck shortly after midnight within the Lafayette Park perimeter, where protests over the death of George Floyd continued for a seventh day.