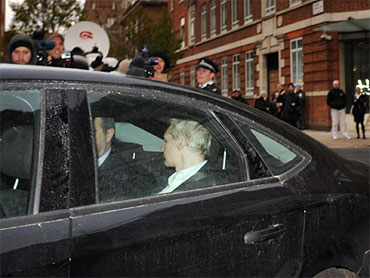 PayPal appears to be the one of the recent target of hackers who, in solidarity with WikiLeaks, have waged attacks against various websites that are denying service to the controversial organization.

PayPal's blog was disabled by hackers this morning (although at the time of this writing, the blog was back in service), but payment services apparently remained functional.

The online payment service froze its account with WikiLeaks on Dec. 3, citing a violation of the PayPal Acceptable Use Policy, which, according to a recent statement, "states that our payment service cannot be used for any activities that encourage, promote, facilitate or instruct others to engage in illegal activity."

Mashable reports that a spokesman for the group behind the attacks, the anonymously backed Operation Payback, said the network of hackers would take aim at websites they deemed as "bowing down to government pressure."

In a Wednesday panel at Paris's LeWeb 2010 conference, PayPal VP Osama Bedier defended the company's WikiLeaks shutdown, and said the decision was a response to governmental requests. "State Dept. told us these were illegal activities. It was straightforward," he said, according to the tech blog TechCrunch. "We first comply with regulations around the world ... making sure that we protect our brand."

Bedier later clarified that the State Department had not approached PayPal directly with the request, but that the company was responding to a letter sent by the State Department to WikiLeaks. The letter argued that any materials which had been "provided by any government officials, or any intermediary without proper authorization ... were provided in violation of U.S. law" and thus, "as long as WikiLeaks holds such material, the violation of the law is ongoing."

Some researchers have also reported that, despite a high volume of WikiLeaks-related Tweets and related hashtags, the topic was not trending on Twitter -- which initially caused speculation as to whether Twitter might be censoring the discussion.

"Is twitter censoring WikiLeaks trends?" read a Monday morning post on the WikiLeaks Twitter account, which then linked to the blog Safety First, which compiled some of the initial research leading to the accusations.

Twitter promptly denied the rumors in a statement, arguing that Twitter's "Trends list" is "is generated by an algorithm that identifies topics that are being talked about more right now than they were previously."

Nevertheless, some speculate that Twitter could be the hackers' next target.

So far, additional websites that have been targeted by the group of hackers includes MasterCard and the website of Swiss bank PostFinance, which recently closed the account of WikiLeaks founder Julian Assange.