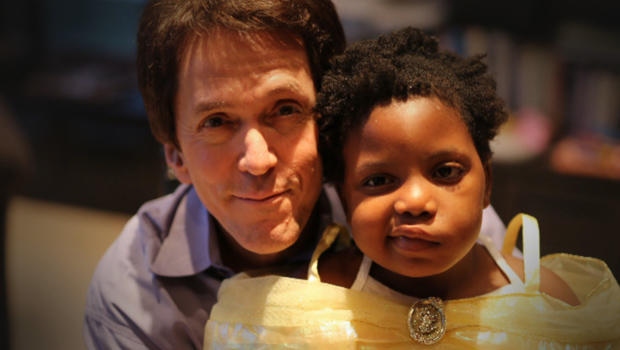 It's the first day of school at the Have Faith Haiti Mission in Port-au-Prince. New backpacks, new school uniforms, new teachers, and at the center of it all, Mitch Albom, the man who wrote "Tuesdays With Morrie" and lots of other bestsellers, straightening backpacks, giving pep talks, and doing whatever needs doing to get the school year off to a good start.

Correspondent Nancy Giles asked, "So, ten years ago when you first came to Haiti, did you plan to run an orphanage?"

"So, you're starting with the funny question?" Albom laughed. "I didn't even know where Haiti was on a map. I was moved by what happened in the earthquake."

It's been ten years since that terrible earthquake devastated Haiti, killing more than a hundred thousand people and leaving millions more injured and homeless.

Like so many others, Albom wanted to help. "We landed just a few weeks after the earthquake," he said. "And you saw people missing arms and legs, walking around and covered in white dust. And then here was this little oasis where there were these kids."

Kids huddled in an orphanage. It hadn't been destroyed in the quake, but the children were forced to sleep on the ground. "I didn't even know if they had parents," Albom said. "Makeshift foam mattresses, not eating anything."

Albom flew home to Detroit, but said, "I couldn't leave it alone, I couldn't get it outta my head. I mean, there were no toilets, really. There was no shower. There was no real kitchen to speak of. And so, I said, 'Well, I live in Detroit. You know, we do things with our hands in Detroit.' And I put a call out."

Twenty-three people answered the call. They called themselves the Detroit Muscle Crew. "We built the first real toilets, showers, kitchen, dining area" at the mission.

"I was here for the first shower. I'll never forget that. They didn't know what it was.  I said, 'Are you ready?' 'Yeah. Yeah.' We turn the water on and the water came down. It was little witnessing the Lord's first rainstorm. They went nuts with glee, and then they started doing this dance, singing and dancing and pushing off the walls."

Now the children of the Have Faith Haiti Mission have daily classes in English and French. They study music, math and science. They have regular medical check ups, three healthy meals a day, and a lot of big dreams.

Giles asked several students what they wanted to be when they grow up. Widley replied, "I want to be a doctor and a writer." Edney? "A surgeon." J.U.?  "I want to be a lawyer."

Junie-Anna said she wants to be a veterinarian: "I love animals. And I wanna be a Chinese translator!"

When Jane Pauley visited with Albom five years ago in Detroit, he was spending four days every month with his kids in Haiti. He still does.

[To watch Jane Pauley's report click on the video player below.]

But something has changed since then. A little girl named Chika arrived.

Was she special from the very beginning? "Oh, yeah," said Albom's wife, Janine Sabino. "You know, most of the kids are shy and they'll lower their eyes and everything, Chika just sat back and checked him out."

But when Chika was five, the director noticed something was wrong; her eye drooped. They found the one MRI scanner in all of Haiti, and got the report. "'This child has a mass on her brain. We don't know what it is. But whatever it is there's nobody in Haiti who can help her,'" Albom recalled. "And that was basically our clarion call to say, 'She's gonna have to come to America.'"

And that, Albom said, changed everything.

He and Janine took Little Chika into their home, and into their hearts. "All of a sudden, here was Chika," Albom said. "It was a gift."

For two years together, they battled DIPG, a rare pediatric brain tumor. And they laughed, and danced, and sang, and became a family.

Albom said, "It was a glorious blessing."

Janine said, "She wasn't the perfect child, but she was perfect for us. She really was!"

It was a journey Albom has written about in his new book, "Finding Chika."

Chika died at age seven, but her story continues. The proceeds from Albom's book will build a new, earthquake-proof school for all their other children.

"Janine and I didn't have kids, and suddenly, we have 47 kids!" Albom laughed. "Probably somewhere in between zero and 47 is the average, the normal desired size. But that's okay; I like havin' 47 kids!"

Mitch and Janine's two oldest kids, Manno and Siem, are now sophomores at Madonna University in Detroit, where Albom can still give them pep talks, as he did in Haiti.

Manno said, "Every single time he came, he always talk about college with me. And this pushed me. And it's, like, 'Okay, okay. Maybe I can do it really."

Manno's dream is to become a doctor: "I wanna go back to Haiti. I've seen kids, you know, who are in the streets just living on the floor. And this breaks me. But kinda give me strength to go hard and to do whatever I can here."

Siem and Manno were both living at the orphanage when the earthquake brought Albom into their lives.

"You could see the change," said Siem. "They, like, they show us love.

At the close of every day, Mitch Albom's kids remember Chika by singing her favorite song: "L.O.V.E." "Every day we sing this song, just to remember her and keep her in our lives," Manno said.

Albom said, "She's taught a lot of kids here how precious life is. She taught me. I had to carry her from place to place towards the end of her life. We were sitting and coloring, I looked at my watch, I jumped up, I said, 'Chika, I gotta go.' She said, 'No, stay and color.' I said, 'Chika, I have to work. This is my job.' And she crossed her arms the way that she always did and she said, 'No, it isn't. Your job is carrying me!'" he laughed. "'Well, of course it is. Of course, that's my job.' My job was to carry her.

"And my job is to carry them."