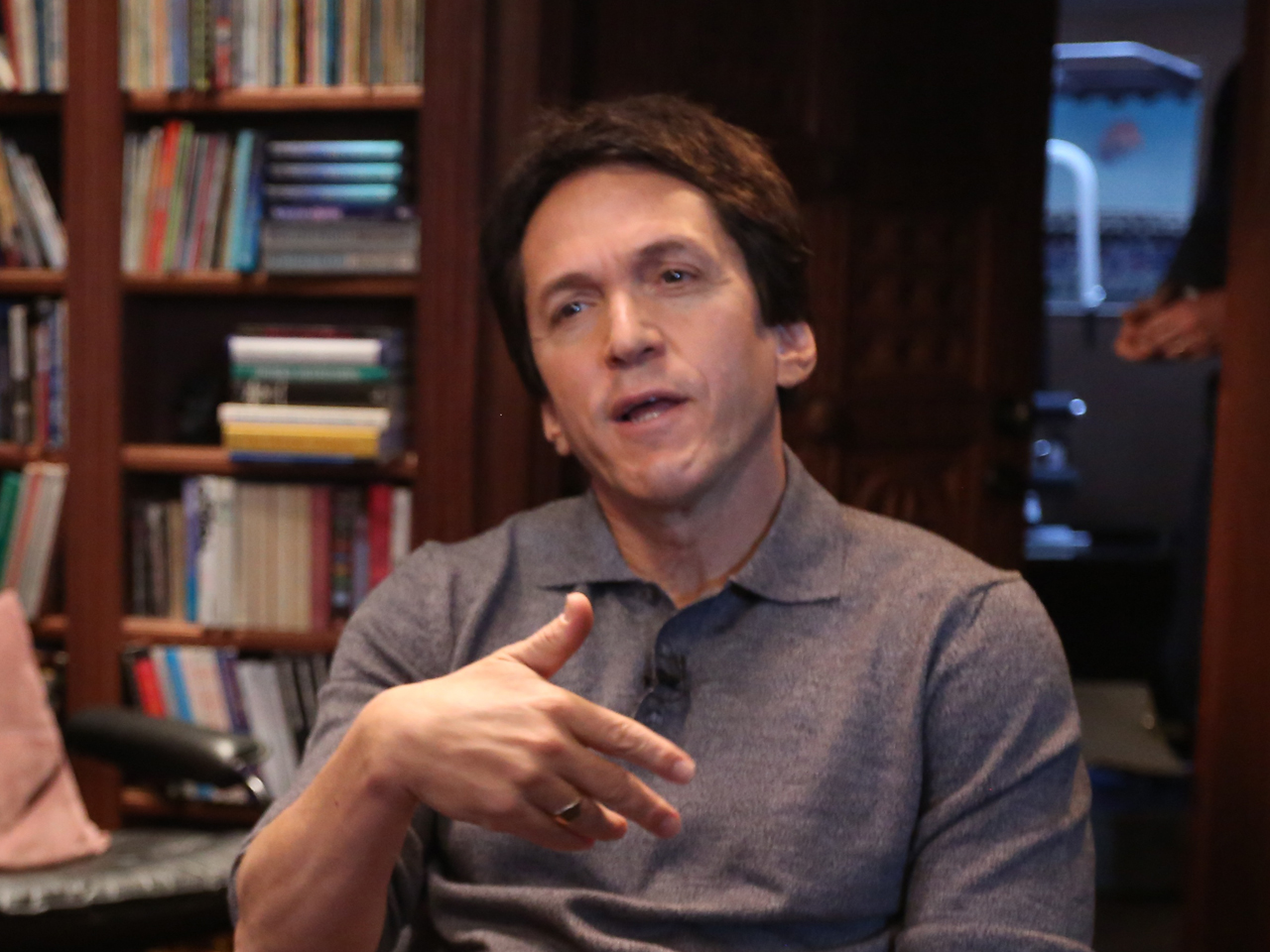 Mitch Albom has learned many lessons about life and death through the writing of his books, including "Tuesdays with Morrie," about the last days of his old college professor, Morrie Schwartz, and he shares them this morning with our newest (and very welcome) "Sunday Morning" contributor, Jane Pauley:


His first love was music. "I wanted to be a musician," said Mitch Albom. "And I did everything that you're supposed to do for that -- and I was a total flop."

Becoming a sportswriter, he says, was an accident: "There was a job on the board at Sport Magazine. If it had been a job at Sewing Magazine, I might have been a sewing writer."

Turns out, he was really good at it, named Associated Press Sports Writer of the Year 13 times.

"People can retire on an accolade like that," said Pauley.

"Yeah," said Albom. "At the pinnacle of a sports writing career, I happened to be flipping the television and happened to see my old college professor, Morrie Schwartz, who I hadn't seen in 16 years. And he's on TV and he's talking about what it's like to die."

So he called his old professor, the man he had nicknamed "Coach" in his younger days.

"I said, 'Hello, Professor Schwartz. My name is Mitch Albom. I was a student of yours in the '70s. I don't know if you remember me.' And the first thing he said after 16 years was, 'How come you didn't call me Coach?" Albom laughed. "So I was definitely coming to visit him by the end of that first phone call."

Nineteen visits followed, all on Tuesdays, a series of conversations that became a book, "Tuesdays With Morrie," to help his old professor pay his medical bills.

It would become a mega-bestseller -- over 15 million copies sold, in 50 editions worldwide -- and a TV-movie starring Jack Lemmon as Morrie.

"Have a little trouble with that word, don't you?" Pauley said.

"Yeah," he laughed. "I could probably say that cleanly: 'I have been blessed with some success.'"

"Some" success? Since "Tuesdays With Morrie," there have been five more books -- all bestsellers, all about the big questions of life and death.

"I always have a problem when people say, 'Oh, you write about dying.' And I say, 'No. People write about serial killers write about dying. In my books, usually one person dies. It usually happens in a paragraph or a half a page. And the rest of the book is about that person's life. Because it's really hard to get people's attention to think about how it matters until you remind them that it's not going to go on forever."

"Unless it does go on forever!" Pauley laughed.

"Well, you let me know when we figure that!"

Meanwhile, Mitch Albom lives like there's no tomorrow, with a column and a radio show he hosts five times a week.

"You write books, you lecture," said Pauley, "and in your spare time, you are a saint (laughs). You notice people who need help and you find ways to help them."

"That's accurate, what you just said," Albom replied. "I notice people who need help, and I try to find the time to help them."

It's hard not to notice in Detroit, where Albom has lived for 30 years. Homeless children, for example, whose mothers are afraid to take them to the doctor when they're sick.

"If you don't have an address, they can call Social Services, and Social Services will take your kids away," said Albom. "So we opened the clinic that asked no questions, privately done so I don't run through the government. And we took everybody, and now we take their moms as well."

One of the doctors at the clinic is Keshia Covington. Dr. Covington happens to be the daughter of the late Reverend Henry Covington, pastor and founder of I Am My Brother's Keeper Church -- which you may recognize from "Have a Little Faith," another of Albom's books that was made into a TV-movie. At night the church becomes a shelter.

Watching over things is Anthony Castelow -- known to everyone as Cass -- who played himself in the movie. Cass described Albom as "awesome. He's the real thing. He do so much for people that people don't even know about."

Mitch Albom has founded or supports seven charities in Detroit alone . . . one in the Philippines . . . and an orphanage in Haiti, where he spends four days, every month.

"The minute I get there, I'm mobbed by all the kids. It's nonstop until, thankfully, our kids go to bed at 8:00 because there's no electricity, and then you get up at 5:00 with the roosters and you start all over again.

"It's been the most amazing experience in my life. For someone who wasn't blessed with children, this is as close as I have been able to come of children of my own. I've got nieces and nephews that I adore, they're like our kids. But these kids need me."

Back in Detroit, Tiesha Brown is about to become a homeowner, thanks to another Mitch Albom program. He told her, "I want to give you the keys for two years -- if you can make the payments on the utilities and the taxes and keep it nice and beautiful like it is, you don't ever have to give these keys back.."

"I will not give them back!" she laughed.

A hard working, rent-paying single mother of three, Brown had been forced to move in with her mother when her landlord was foreclosed on.

Brown called her mother: "Mom, you're not going to believe this -- Mitch just gave me a house! We no longer have to live with you!" she laughed.

Cell phones figure mightily in the latest Mitch Albom bestseller, "The First Phone Call From Heaven" -- inspired, he says, by his own mother.

"She suffered a terrible series of strokes that robbed her of the ability to speak," Albom said. "And I realized how much I miss that voice. So I created this story and this book about what happens if those voices come back into people's lives?"

"In your acknowledgments," said Pauley, "you say, 'Finally and firstly, anything created by my heart or hand is from God, by God, through God, and with God.' And I think that's the closest I've heard you speak about God yet."

"In my worldview, it's not right for me to finish something and not acknowledge that it wasn't just me and my mind doing it," said Albom. "Be selfish."

"Have you always felt this way?" Pauley asked.

Albom noticed the change, he said, "when I began to lose people. I recognize how small I really am in this whole picture."

What's next for Mitch Albom? Another novel -- about a musician, he said.

"Does he die?" Pauley asked.

"Does he die? Do you just assume because I'm writing a book that everybody dies?" Albom laughed.

"Well, everybody dies. That's all I can tell you," he replied.