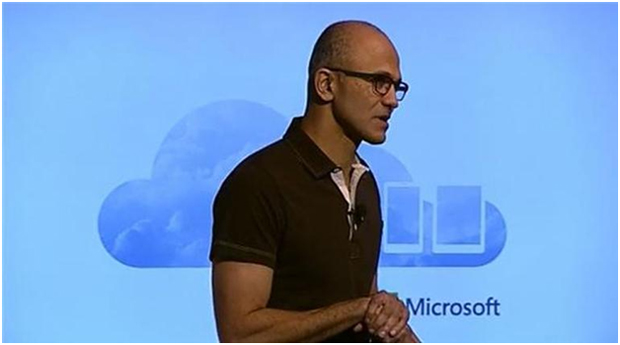 One of the most epic tech rivalries around has taken another twist. Microsoft officially launched Office for Apple's iPad on Thursday, after holding out against the competitor's iconic tablet for almost four years.

Microsoft's new CEO, Sayta Nadella, ushered in a new era for the company by promising to focus more on the popular mobile devices.

Nadella made his first major public appearance as CEO at Thursday's event, and said he felt rejuvenated after his 22 years at the company,.

"You see things from a fresh set of eyes and fresh perspective," Nadella told a crowd of reporters gathered for the announcement in San Francisco.

When former CEO Steve Ballmer was in charge, a Windows-centric view dominated the company's decision-making process. In making such a paradigm shift, Nadella is betting that Microsoft can win back some of the business professionals that now run competing productivity apps on the popular tablet, reports CNET.

The new Microsoft Office apps will allow iPad users to edit and create documents, spreadsheets and presentations -- for a price. With the "freemium" download, users will be allowed to view a document or presentation without needing a paid subscription. However, in order to edit or create a document, users will need a subscription to Office 365.

As a business strategy, the Office app for iPad represents a major step in the right direction for Microsoft, said FBR Capital Markets analyst Daniel Ives.

"They finally looked in the mirror and realized they needed to go with the crowd in terms of iPads," Ives said.

Like several other analysts, Ives thinks the Office apps for the iPad could generate an additional $1 billion in revenue for Microsoft. The Office 365 subscriptions cost $70 or $100 annually, with the lower price placing more restrictions on the number and types of devices that can be used.

Yet skepticism remains among many in the industry. Microsoft is showing up late to the game, and there are already inexpensive or free products that offer similar features, such as GoogleDrive, EverNote, and Apple's own iWork suite.

Recently, in a Twitter exchange with other Silicon Valley venture capitalists, Khosla Ventures' Keith Rabois tweeted, "Google Documents and Quip are superior for documents, Keynote is superior and Excel is over-rated."

Microsoft says it took its time bringing Office to the iPad because it wanted to do it right. "It's not a trivial port," Nadella told CNET after his prepared remarks. "One of the things we wanted was to do this with particular care and focus. I still think it's in the early days. I understand that anything can be done quickly but we wanted to do it right."

Even though they've long been rivals, Apple is "excited" that the software is coming to its iPad ecosystem, according to CNET.

Office has long been one of Microsoft's gold mines. In the company's last fiscal year ended June 30, the business division that is anchored by Office posted an operating profit of $16.2 billion on revenue of $24.7 billion.

Some analysts think the availability of Office apps could encourage more people to buy an iPad, which could in turn siphon sales away from laptops running on Windows, which generates billions in licensing fees for Microsoft each year. This year, Gartner Inc. expects 271 million tablets to be sold, including those running on Windows and Android, versus a total of 277 million desktop and laptop computers. By the end of 2015, tablets should be outselling PCs by a wide margin, Gartner said.

Microsoft hasn't made Office apps for Android tablets yet, though the company has previously said those will be coming. Last year, Office for Android phones came out a month after the iPhone version debuted.

"We are taking great focus and great care that Office on every device shines through," Nadella said.