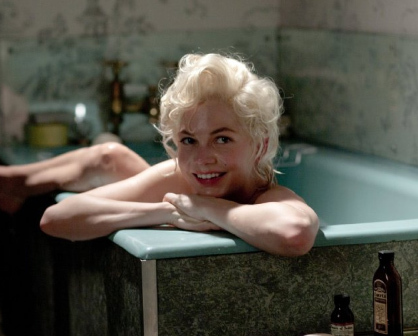 There are few cultural icons as big as Marilyn Monroe, and a new film explores the factors that might have been behind her glitz and glamour, taking a backstage look at her torment and genius.

"My Week with Marilyn" features several well-known stars, including Michelle Williams and Kenneth Branagh -- who are getting Oscar buzz for their performances. They recently sat down with CBS News correspondent Mo Rocca.

Monroe, Rocca, noted has been gone for almost half a century, but her fame hasn't waned, with people still enthralled by her bombshell good looks and little-girl vulnerability.

Pictures: Michelle Williams in "My Week with Marilyn"

In "My Week with Marilyn," Williams tackles the role, transforming herself into the legendary sex siren.

Williams told Rocca, "When she's Marilyn Monroe, she's not actually being herself. She's being something other, something (that) requires so much transmission of all these energies, availability, openness, sexuality, connection, all these things that are superhuman qualities to sort of drum up and they drain you. They really cost you."

When asked if Monroe was actually a character, Williams said, "I would say so, and it's beguiling to think maybe that's who she really was, because who wouldn't want to believe that that's possible. But you know that's just the shell."

Williams said, "Things that I've read said she was actually quite, I hate to say it, but ordinary. I read something once that was so moving that, her face could fall apart in between glances, and then (she could) put it back together -- that it was something she could rearrange in a matter of seconds."

The film takes place during the shooting of "The Prince and the Show Girl." The 1957 comedy teamed Monroe with acting giant Sir Laurence Olivier, who also directed the movie. Olivier is played by Branagh.

When asked if Monroe fell in love with Olivier, Branagh said, "I think it's possible he thought that she would fall in love with him. I think he knew the world had already fallen in love with Marilyn, that her apparent lightness, at least in the screen roles, was beguiling to him."

The improbable pair had different reasons for joining forces. Monroe wanted to be taken more seriously as an actress; Olivier, his film career waning, wanted to be a bigger star.

Branagh says it was an electrifying clash of titans: Monroe and Olivier had radically different approaches to acting. He was classically trained, and she was a "method" actress who could only perform when inspired from within.

It was a torturous experience.

Branagh said, "Marilyn stopped (Olivier from) directing movies for 20 years. She put him off that much."

"The Prince and the Show Girl" was a middling box office success and critical disappointment. And yet, Rocca remarked, Marilyn shines.

Williams says Monroe was a better comedic actress than she ever knew.

"It wasn't her real love," Williams said. "What she wanted more than anything was to be a serious actress and to be given serious roles. So comedy was sort of, almost a default in a way, and I don't think that she ever really appreciated how fine she was at it."

Rocca said to Williams, "I want read you a quote from Marilyn: 'I knew I belonged to the public and to the world, not because I was talented or even beautiful, but because I have never belonged to anything or anyone else.' Kind of sad?"

Williams said, "Yeah, I'll say. Yeah, I think she said that the best she ever felt was when she was in Korea entertaining the troops. And that the audience was the only home that she'd ever really known. And the only people who understood her were the audience -- not the industry she'd given most of her life to, not the three attempted marriages, but the audience. And even from photos too, I think she sort of got a confirmation of her existence. No father would claim her. Her mother couldn't be consistent with her. And the photos and the audience were sort of proof that she belonged."

"My Week with Marilyn" opens in select cities Wednesday.