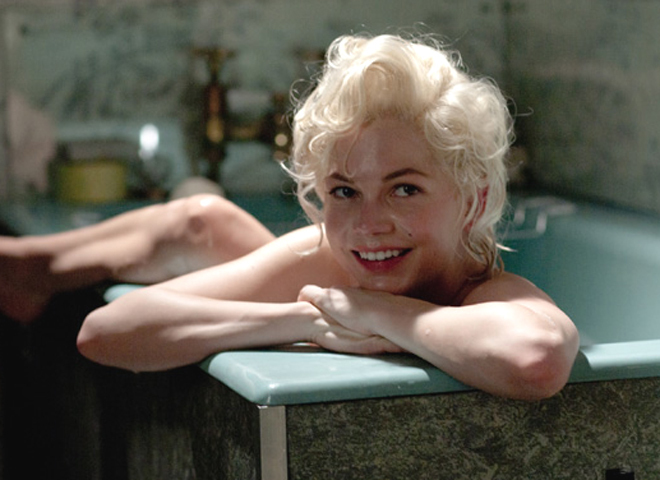 Food lovers aren't the only people who can be heard to exclaim, "What a dish!" Movie lovers soon may be saying it as well, once they've been to the new film Mo Rocca has just seen:

Just try to look away. The platinum hair; the red, red lips; those curves. Marilyn Monroe put the X in excess - yet could seem perfectly innocent.

One critic called her "a mixture of wide-eyed wonder and cuddly drugged sexiness."

"There's a certain sort of swivel in her hips," Williams adds.

It might be hard to imagine the pixie-ish Michelle Williams as Marilyn Monroe. Until you see her like this.

"My Week With Marilyn" is based on the memoir of Colin Clark, a studio gopher who had a brief relationship with Marilyn during the filming of "The Prince and the Showgirl."

That 1957 movie brought Marilyn to England and paired her with Laurence Olivier. Her fragile ego and infamously difficult on-set behavior drove him to the edge - but Marilyn was perhaps never more luminous.

"She carefully crafted her own image-- to a genius degree," Williams tells CBS' Mo Rocca. "She studied herself, she studied her body, her face. She figured out how to arrange her features in the most pleasing way... She developed this character for herself to play of Marilyn Monroe."

Marilyn was no dumb blonde, says Williams, who spent months studying her. She was shrewd, with a delicious sense of humor.

"She was so witty," Williams adds. "And she could spin situations. Like when her nude photos were released, and the studio said, "You have to deny that it's you...and she said, 'Well, I can't. My face is in the photos. And plus I was hungry, and I've got nothing to be ashamed of.' And they said, 'Well, don't sign them. You can never sign them.' But she would sign them. And she would write on them, 'Do you think this is my best side?'"

"To put you, as Michelle Williams, side by side with Marilyn Monroe, you know, you had to really transform," says Rocca.

"I did," says Williams. "I think I'm always sort of unconsciously trying to make myself smaller. And this I thought every single day about expansion."

To get Marilyn's wiggle, Williams walked around with a belt tied around her knees.

"There was a sort of a sense of a figure eight to her walk, that her shoulders were back, it looked like she had a sort of -- like a balloon was attached to her breastbone. Her nipples were always pointed up... That was the work that I wanted to start as early as possible, because I don't want any of those thoughts to be anywhere in my mind when I'm in the middle of a scene. I don't wanna be thinking, 'Point your nipples up,'" Williams laughs.

"You just wanna do that naturally," suggests Rocca.

At 31, Williams is the same age Marilyn was in the movie. While Marilyn was raised an orphan in California, Williams grew up in Montana and started acting professionally as a child. At 15, she legally emancipated herself from her parents so she could work full-time.

"Emancipation means you divorce your parents and you prove yourself emotionally and financially independent and able to live on your own," Williams says.

"And why did you do that?" asks Rocca.

"Oh, because I was-- 'cause I didn't know anything about anything," Williams says. "Just in the immediate sense, it sounded like a great idea... But I think most 15-year-olds would relish the idea to live with no one looking over their shoulder."

"And was there trouble at home? Was that part of the reason why you emancipated?" asks Rocca.

"It was really mostly because I've always had kind of a vicious independent streak," says Williams.

She spent six seasons on the teen soap "Dawson's Creek" before breaking into movies. Williams earned the first of two Oscar nominations as the jilted wife in Ang Lee's "Brokeback Mountain."

It was then that she fell in love with co-star Heath Ledger. The couple had a daughter -- Matilda Rose -- in 2005. Three years later, Ledger died from an accidental drug overdose.

"Marilyn suffered so much loss throughout her life. You had a terrible loss in 2008 with the passing of Heath. Did you find a connection there?" asks Rocca. "Did it help you understand Marilyn better, do you think?"

"I really didn't look for one," says Williams. "I didn't want to connect those dots."

Williams and her daughter have been favorite targets of the paparazzi.

"Have you ever had to explain to Matilda who those people are taking pictures?" asks Rocca.

"Yeah, I do a lot of explaining about that," she says. "I've said, 'People really cared about your father, and thus they really care about you. And they want to see how you're doing, and sometimes a picture makes them happy. And it makes them feel like -- they like to see you smile.'"

"In the movie, Marilyn a few times is told by her acting coach, has to be told, 'You are the best. You are the best actor in the world.' Could you relate to that a little bit?"

"To needing that kind of support system?" asks Williams. "Oh, gosh, yes. A lot of the time I feel like-- I feel like I'm living hand to mouth on people's compliments. I don't ask anybody, like, 'What did you think of that scene?' or, 'How did it go?' or blah, blah, blah, because I get addicted to positive affirmation... There's just so much uncertainty when you're making your work, doing your job -- I don't know, do you feel it too?"

There is only one Marilyn. But Michelle Williams says Marilyn Monroe is a role she'd be happy to play for the rest of her life.

"When you're walking down the street in New York in the summer, do you think you'll be tempted to stand over a subway grating?" asks Rocca.