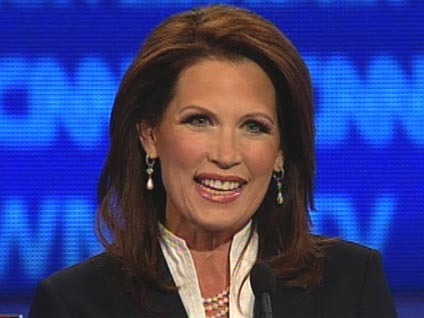 Minnesota Rep. Michele Bachmann entered the Republican presidential debate in New HampshireMonday night as the only participant who had not announced his or her campaign. No longer: Bachmann announced early in the debate that she had filed paperwork for a 2012 run.

"I filed today my paperwork to seek the office of the presidency of the United States today and I'll very soon be making my formal announcement," she said.

The outspoken, high-energy politician -- the first woman to enter the race -- elaborated in a statement emailed to reporters immediately after those comments.

"Our country needs a leader who understands the hardships that people across America have been facing over the past few years, and who will do what it takes to renew the American dream. We must become a strong and proud America again, and I see clearly a better path to a brighter future," said Bachmann.

The three-term Congressperson had previously said she would make an announcement this month about her presidential plans in Waterloo, Iowa, the city where she was born and lived through early childhood.

The founder of the Tea Party caucus in the House, Bachmann has cast herself as the strongest candidate to unite fiscal, social and national security conservatives. A prolific fundraiser, she has attracted large crowds in the first-in-the-nation voting state of Iowa,  where she is expected to make a hard push in hopes of generating momentum for her presidential run.

Bachmann said last monththat "being born in Iowa gives every advantage -- every advantage a girl would want to have." She has already hired staff in Iowa and made numerous stops in the state, as well as in New Hampshire and South Carolina, two other key early voting states.

During the debate, Bachmann vowed to repeal the federal health care law if elected president and to stop funding the Environmental Protection Agency.

Bachmann has said of a presidential campaign that she "had this calling and tugging on [her] heart that this is the right thing to do."

Bachmann has risen to public prominence thanks to her regular television appearances, where she has gained prominence as a partisan flamethrower. (One example: Bachmann has accused President Obama of running a "gangster government.")  She failed in her attempt to join the House leadership, however, and does not have a long line of policy accomplishments under her belt.