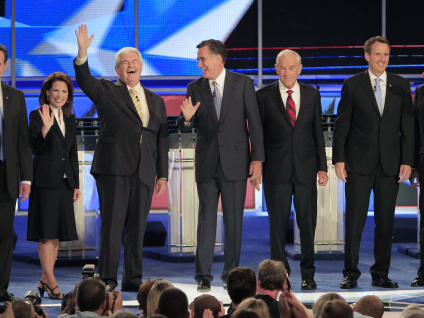 The seven Republican presidential candidates onstage at a debate in New Hampshire Monday night split on whether they support passage of a constitutional amendment to define marriage as between one man and one woman, while one - Rep. Michele Bachmann - seemed to trip over the question.

Within the context of New Hampshire's law allowing gay people to marry, Bachmann was asked what influence she would use as president "to try to overturn these state laws despite your own personal belief that states should handle their own affairs whenever possible."

"I do believe in the 10th amendment and I do believe in self-determination for the states," Bachmann responded, adding that she also sees marriage as "between a man and woman." Later, she said that she doesn't "see that it's the role of a president to go into states and interfere with their state laws."

The comment generated applause and was taken by debate moderator John King as Bachmann saying she would not interfere with the New Hampshire gay marriage law. Later, however, the Minnesota Republican clarified her position - saying she did back a federal marriage amendment.

"I do support a constitutional amendment on marriage between a man and woman, but I would not be going into the states to overturn their state law," said Bachmann.

Two of the candidates - Herman Cain and Rep. Ron Paul - suggested they opposed a federal marriage amendment. (Cain said it should be up to the states, while Paul stressed the federal government should not be involved in marriage at all.)

Newt Gingrich said that if the Defense of Marriage Act - which the Obama administration is now declining to defend in court - is overturned, "at that point you have no choice but a constitutional amendment."

Both Mitt Romney and Tim Pawlenty said they backed a constitutional amendment. So did Rick Santorum, who also suggested that the position didn't constitute overriding states' rights.

"The constitutional amendment includes the states," he said. "Three-quarters of the states have to ratify it. So the states will be involved in this process. We should have one law with respect to marriage. There needs to be consistency as something as foundational as what marriage is."

The candidates were also asked whether they would try to reinstate the "don't ask, don't tell" policy barring gay men and women from serving openly in the military. Cain said that he wouldn't have overturned the policy, but "now that they have changed it, I wouldn't create a distraction trying turn it over as president."

Paul said he would not work to overthrow the repeal of "don't ask, don't tell," saying individual rights are paramount. He said behavior should be what matters, "not the person who belongs to which group."

Pawlenty declined to answer - saying he would defer to military commanders - while Romney chafed at the question, saying "we ought to be talking about the economy and jobs." He then declined to answer the question as well, though he said he believed the policy should not have been overturned in the first place.

The only unequivocal answer to reinstate the policy came from Santorum, who is known for his social conservatism.

"The job of the United States military is to protect and defend the people of this country," he said. "It is not for social experimentation. It should be repealed."

The candidates were also asked their perspective on the separation of church and state. Watch below: