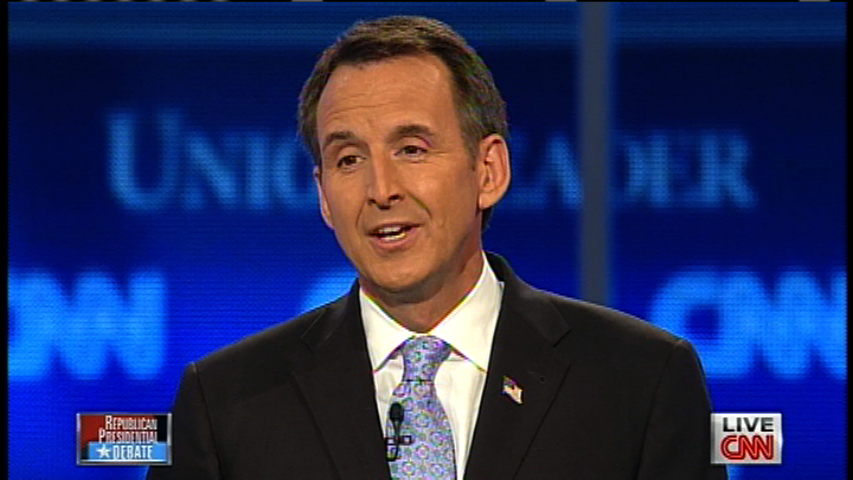 Former Minnesota Governor Tim Pawlenty on Monday coined a new phrase to criticize President Obama, calling him a "declinist," as he backed off a phrase he coined a day earlier to criticize rival Mitt Romney.

Pawlenty at first declined to use the word "Obamneycare" during the Republican debate in New Hampshire, though it was Pawlenty himself who first uttered the word a day earlier to describe the similarities between the signature health care programs of Obama and Romney, the former governor of Massachusetts.

CNN's John King, who moderated the debate, called Pawlenty on the shift: "If it was Obamneycare on 'Fox News Sunday,' why isn't it not Obamneycare standing here with the governor right there?"

Pawlenty conceded, telling the host his decision to use "the term 'Obamneycare' was a reflection of the president's comments that he designed Obamacare on the Massachusetts health care plan" that was a signature of the Romney administration.

The Minnesotan said Mr. Obama is a leader who views the United States as a nation "of equals around the world," instead of the richest and most powerful country in the world with a special role in international affairs.

"This president is a declinist. He views America as one of equals around the world. We're not the same as Portugal; we're not the same as Argentina. And this idea that we can't have 5 percent growth in America is hogwash. It's a defeatist attitude," Pawlenty said as he defended his forecasts for economic growth that have been widely viewed as overly optimistic.

The U.S. economy grew at a 1.8 percent annualized pace in the three months of this year, according the latest Commerce Department estimate released last month.