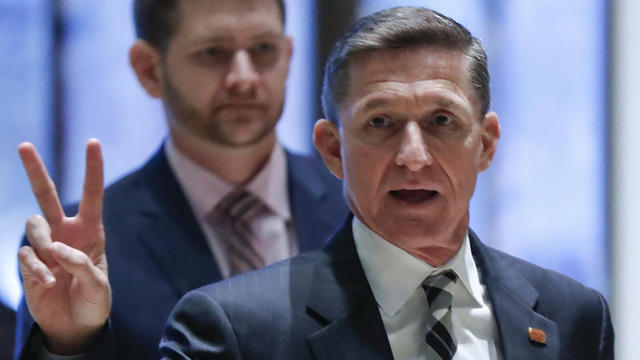 CBS News’ Major Garrett reports Kellogg is viewed more as a placeholder than a permanent solution, and Petraeus is under serious consideration, but he’s not yet considered a front-runner. Defense Secretary James Mattis will be a key voice in the process to replace Flynn as he has worked closely with both Harward and Petraeus.

Speaking to NBC’s “Today,” top Trump adviser Kellyanne Conway confirmed there are “three candidates, very strong candidates that will be considered for a permanent position here.”

Kellogg had been serving as chief of staff and executive secretary of the National Security Council when Flynn resigned. He is a former commander of the 82nd Airborne Division and served as chief operating officer for the Coalition Provisional Authority in Baghdad after the U.S.-led invasion in 2003, according to The Washington Post. He also worked at Oracle, CACI International and Abraxas, according to the Post.

Harward worked under Defense Secretary James Mattis when Harward was deputy commander of CENTCOM from 2011 to 2013. He previously served as deputy commanding general for operations of Joint Special Operations Command at Fort Bragg in North Carolina. Harward has also commanded troops in both Iraq and Afghanistan for six years after the 9/11 attacks. Under President George W. Bush, he served on the National Security Council as director of strategy and policy for the office of combating terrorism.

Petraeus, who served as President Obama’s CIA director from 2011 to 2012, has a long history in counterinsurgency tactics and strategy. Mattis also supported Petraeus during the Trump transition period when Petraeus was under consideration for secretary of state. Petraeus also led U.S. forces in Afghanistan, succeeding Stanley McChrystal, and also served as commander of CENTCOM.