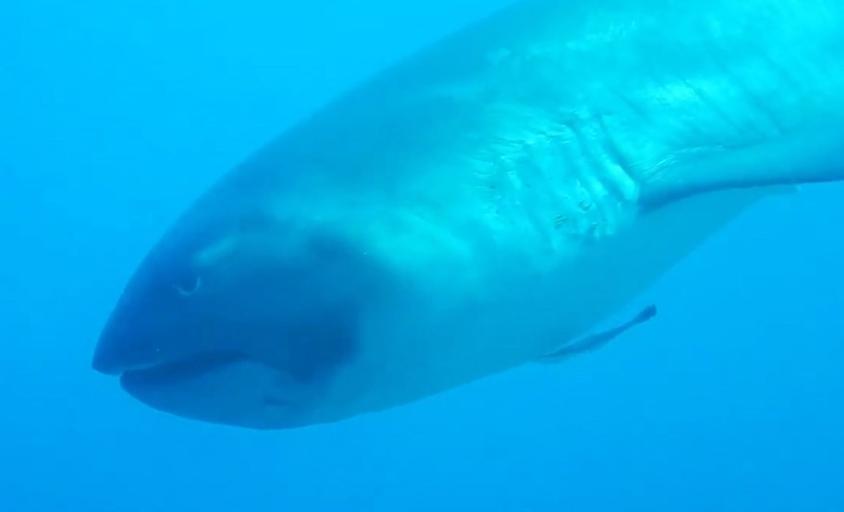 Far below the surface of the sea lives a creature so mysterious and unusual that it's often dubbed the "alien shark."

The megamouth shark typically swims nearly a mile deep in the ocean. So it's no surprise the shark is a rare sight for humans.

Only 60 megamouth shark sightings across the Atlantic, Pacific and Indian Oceans have been confirmed since the shark was first discovered in 1976 off the coast of Hawaii, according to the Florida Museum of Natural History.

Last week, British diver Penny Bielich was able to add to that number.

The 52-year-old, who describes herself as a "beginner diver," caught a glimpse of the large shark during a deepwater dive at Gili Lawa Laut, off Komodo Island in Indonesia. She was nearing the end of her third dive with instructor Heikki Innanen at a popular site called "Shotgun" when the shadow of the 15-foot-long shark appeared.

"My instructor urged me to video the shark," Beilich told CBS News. "I didn't really realize that it was such a rare shark."

The megamouth shark has only been filmed a handful of times over the past 41 years.

"This is the first-ever video recording of this shark in its natural environment," Bielich said of her 26-second video, which has been shared online.

"Humbling" is the only word Bielich could use to describe the rare encounter.

The megamouth shark is certainly intimidating to look at. The dark brown and gray shark can grow to about 17 feet long and has approximately 50 rows of small teeth on each jaw, which it shows off as it swims with its mouth wide open.

Lucky for Bielich, the creature doesn't pose much of a threat to humans. The species eats mainly krill and other small prey.

It's one of three species of filter-feeding sharks, along with basking and whale sharks.

"The megamouth is considered to be less active and a poorer swimmer than the basking or whale sharks," Florida Museum of Natural History explains. "Poor mobility likely is a reflection of its flabby body, soft fins, asymmetrical tail, lack of keels and weak calcification."

The shark may not be a fierce predator, but that didn't make the encounter any less extraordinary for Bielich.

"It was a once in a lifetime experience that I will never forget," she added.