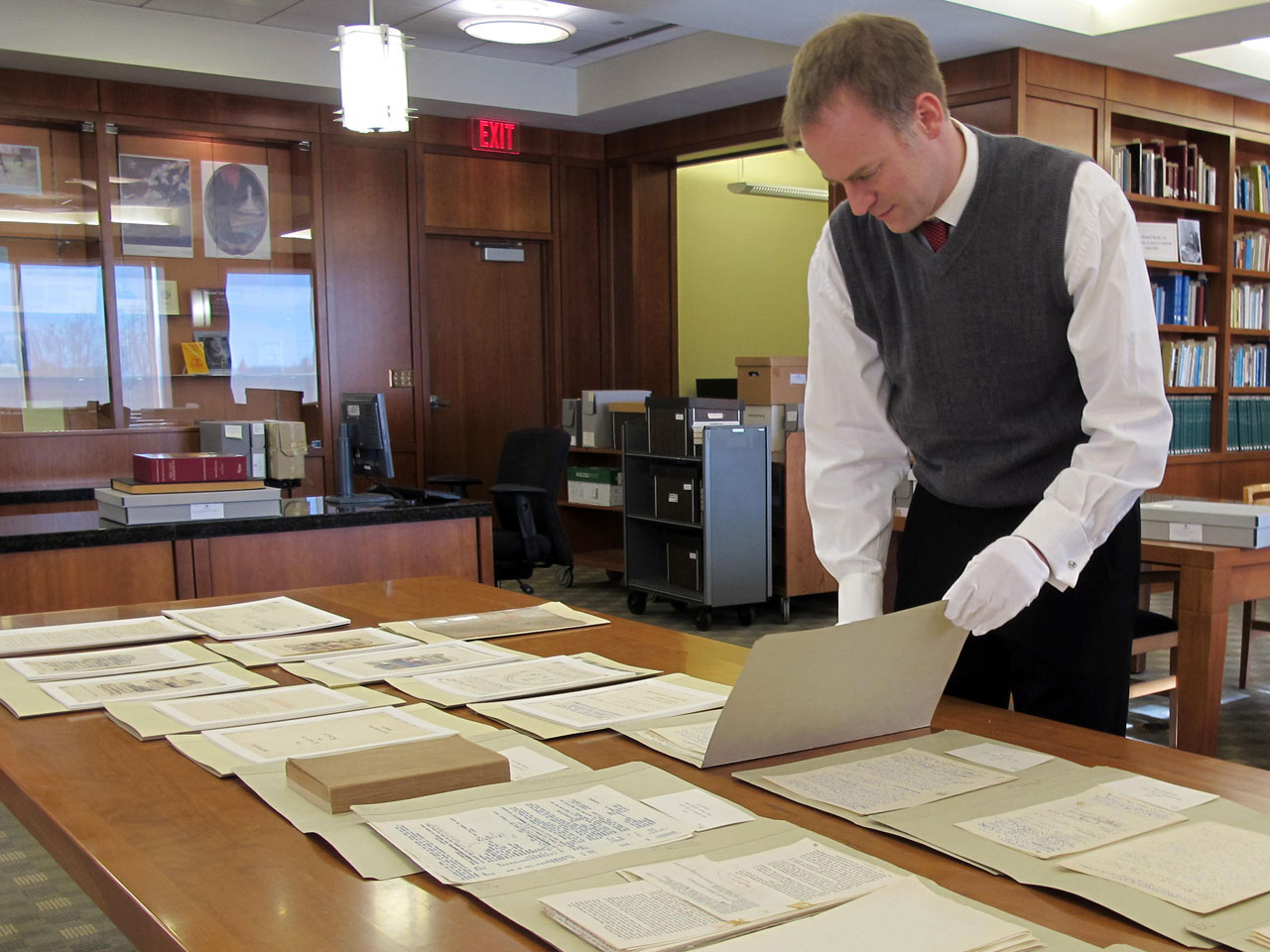 MILWAUKEE The vast collection of J.R.R. Tolkien manuscripts initially sold senior Joe Kirchoff on Marquette University, so when the school offered its first course devoted exclusively to the English author, Kirchoff wanted in. The only problem: It was full, and he wasn't on the literature track.

Undaunted, the 22-year-old political science and history major lobbied the English department and others starting last spring and through the summer and "kind of just made myself a problem," he said. His persistence paid off.

"It's a fantastic course," said Kirchoff, a Chicago native. "It's a great way to look at something that's such a creative work of genius in such a way you really come to understand the man behind it."

He and the 31 other students can now boast of their authority about the author who influenced much of today's high fantasy writing. The course was taught for the first time this fall as part of the university's celebration of the 75th anniversary of "The Hobbit" being published. And class wrapped up just before the film, "The Hobbit: An Unexpected Journey," was released Friday.

The class, which filled up fast with mostly seniors who had first dibs, looked at Tolkien as a whole, not just the popular "Lord of the Rings" and "The Hobbit." Students took their final exam this week, and the course was so well received, Marquette is considering more in the future.

"It's the best class I've had in 27 years here ... for student preparation, interest and enthusiasm," said English professor Tim Machan. "And I can throw out any topic and they will have read the material and they want to talk about the material."

Marquette is one of the main repositories of Tolkien's drafts, drawings and other writings -- more than 11,000 pages. It has the manuscripts for "The Lord of the Rings" and "The Hobbit," as well as his lesser-known "Farmer Giles of Ham" and his children's book "Mr. Bliss." Marquette was the first institution to ask Tolkien for the manuscripts in 1956 and paid him about $5,000.

The university acquired the collection after it hired William Ready in 1956 to build its literary collection. Ready, who became interested in Tolkien after reading "The Hobbit," in turn hired Bertram Rota, a London rare book dealer, to serve as the agent for Marquette.

Rota wrote to Tolkien and asked for his original manuscripts. Tolkien happened to be worried about his retirement finances and agreed to the sale. Tolkien died in 1973.

Ready left Marquette in 1963 to head the library at McMaster University in Ontario. The department of special collections and archives is now named for him. Ready died in 1981.

Other significant collections are at the Bodleian Library at Oxford University in England and Wheaton College in Illinois.

Though Tolkien classes aren't unusual nationwide, Marquette students had the added bonus of being able to visit Tolkien's revisions, notes, detailed calendars, maps and watercolors on site at the school's archive. And they got a lesson from the school's archivist Bill Fliss.

"One of the things we wanted to impress upon the students was the fact that Tolkien was a fanatical reviser," said Fliss said. "He never really did anything once and was finished with it."

"When you get down and look at just his script and his artwork in general, it all kind of flows together in this really beautiful, like, cumulative form," Wabiszewski said. "It's cool. It is just really cool to have it here."

The class also looked at Tolkien's poetry, academic articles and translations of medieval poems; talked about the importance of his writers' group, the Inklings; and explored what it meant to be a writer at that time.

"We've ... tried to think about continuities that ran through everything he did," Machan said. His students were also required to go to three lectures that were part of Marquette's commemoration.

"The Hobbit," a tale of homebody Bilbo Baggins' journey, is set in Tolkien's fictional realm of Middle-earth and takes place 60 years before "The Lord of the Rings." The movie released Friday is the first of the trilogy, with "The Hobbit: There and Back Again" set for release on Dec. 13, 2013, and a third film to come out in the summer of 2014.

Most of the students were just finishing elementary school when the first "Lord of the Rings" film was released 11 years ago.

Kirchoff said he started reading "The Hobbit" and the "Lord of the Rings" when he was in fourth grade, before the movies came out. He said the movies have introduced others to Tolkien's ideas, making his love for Tolkien's fantasy worlds more socially acceptable.

"The movies were fantastic enough and engaging enough to coexist in my mind with the literature I really do love," he said.

Wabiszewski said it's clear her classmates weren't just taking the class as a filler.

"I definitely expected the enthusiasm from everybody but just the knowledge that everybody brought into the class, it's cool," she said. "We really have a smart group of people in that class who have a lot to offer."