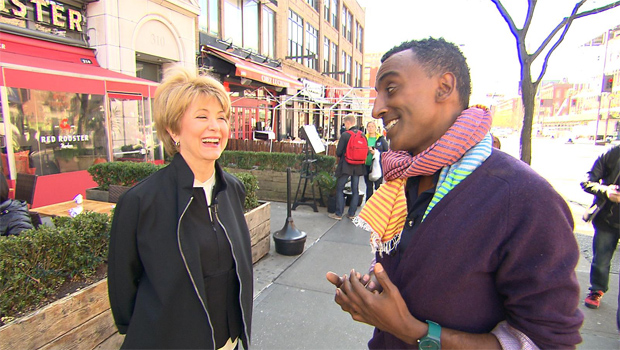 One top chef's recipe for success features a life story spanning three continents. He tells his tale to our Jane Pauley:

"Meet expectations?" says chef Marcus Samuelsson. "No, no, no, no. 'Exceed.' None of this was built on meeting anything. Exceed!"

Though he's authored the cookbooks, done the TV shows (winning "Top Chef Masters"), and his flagship restaurant Red Rooster Harlem is truly destination dining, Samuelsson is anything but a conventional chef.


His birth name was Kassahun Tsegie. "Just like any other Swede, I was born in Ethiopia," he laughed.

Were it not for an epidemic when he was three, Samuelsson might never have been to Sweden.

"My sister and I, my mother in Ethiopia, we had tuberculosis. This is in the early '70s. And my mom walked from our village into [Addis Ababa]. Took us days. And not only did she walk us into Addis, the capital, but she also took us to a hospital. And once she got to the hospital, she passed away."

He and his sister were adopted by a Swedish couple. His first memories are of growing up in Sweden. "Us just being the Samuelssons, and doing what Swedish kids does, right?" he laughed. "Ice skating, eating herring, just being fun-loving stupid kids!"

His grandmother, Helga, taught him to love cooking. "We had to roll meatballs," he said. "We had to pickle herring. We had to preserve lingonberries. There was always a season in Helga's kitchen, and I loved that. She's a natural cook. And I had to work for everything."

"I got a job in a three-star Michelin restaurant in France. And chef told me at that time, 'You have to leave Europe. 'Cause only America would accept a black chef.' And with that advice, I moved to America."


To New York City, as an apprentice at the exclusive restaurant Aquavit. When the executive chef died suddenly, Samuelsson was offered the job. He was 23.

"You exceled, and you were noticed," said Pauley.

"I also think it's also the blessings of being a black man, of knowing that I would not get a lot of shots, I'm not gonna get a lot of chances. So you take the chance that is in front of you."

He became the youngest chef ever to earn a New York Times three-star review.

But 9/11 caused him to rethink everything: "It shook me in a way that you star to ask those other questions in life: What am I doin' this for? What is all this worth? Should I just cook for very exclusive people in Midtown all my life? What if I open a restaurant that is a little bit more inclusive and affordable?

"To me it's really about flexing the muscles of being a big-time chef to say, hey, you know what? Let's change dining. Let's look at urban America, let's look at Harlem as a dining opportunity instead of an opportunity that we disconnect from the city."

The answer was Red Rooster Harlem, with a menu that reflects both the flavors of an iconic neighborhood and Samuelsson's diverse influences. "I love the culture that is in Harlem, which is vibrant, it has a lot of character, a lot of personality. It has a lot of flavor!"

"I didn't grow up with fried chicken so I had to learn it!" he said. "So I came up with this idea, I'm gonna fry it whole, the whole bird. Certain foods need a lot of explanation. Fried chicken shouldn't!" he laughed.

When Marcus Samuelsson greets his guests, you could be forgiven for thinking it's a kind of gracious victory lap. He has truly come so far.

"Your very unique narrative cannot be underestimated," said Pauley. "And your food speaks for itself. But your narrative does carry the message far, far beyond. What a weird blessing that was."

"Life throws you so many different curveballs that all you wish and hope for is that you're prepared for it," he said. "I feel like I'm living the dream that I wanted to establish for myself. Once you do that, you should be lucky and grateful. And I am those two things every day."