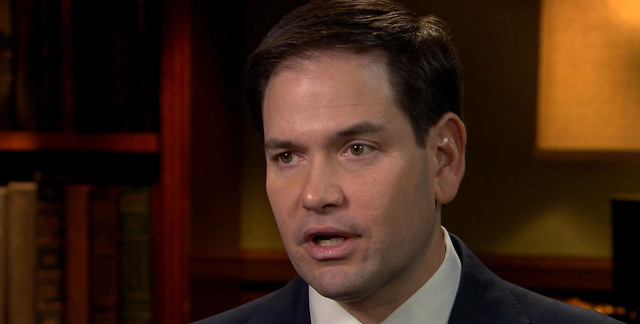 Sen. Marco Rubio, R-Florida, said on CBS' "Face the Nation" that the United States Congress should impose new sanctions against Iran, in spite of strong opposition to such a move from President Obama and foreign allies like British Prime Minister David Cameron.

"I believe we need additional sanctions," he told "Face the Nation" anchor Bob Schieffer. "I believe any deal with Iran requires congressional approval, and I hope we'll move quickly in the new Congress to pass both of those. Look, the only reason Iran is even at the table is because of existing sanctions. And these negotiations that are going on now are really not going to bear fruit."

The United States and the rest of the so-called P5 +1, which also includes Britain, China, France, Germany and Russia, is currently embroiled in a series of negotiations with Iran over its nuclear program. Republicans and Democrats in the Senate have expressed support for legislation that would impose new sanctions on Iran should the negotiations fail by June 30. However, Mr. Obama and his allies argue that the legislation could prompt Iran to pull out of the negotiations entirely.

Rubio charged that Iran views the negotiations as "nothing but an effort to buy time to gain some sanctions relief" while not giving up any irreversible concessions.

"So I'm not optimistic these talks are going to lead to anywhere anyways, and we need to have in place sanctions that kick in when those talks fail," he said.

Rubio, a potential 2016 presidential candidate, said that national security will be one of two major issues in the next presidential elections.

Additionally, he said the presidential election will be about addressing the "radical transformation of our economy."

"We need new modern policies to give everyone an equal opportunity to succeed, and I believe the next president of the United States needs to be someone that understands the 21st Century," he said.

A new CBS News poll shows that the majority of Republicans don't know enough about Rubio to say whether they'd support his presidential aspirations. While he hasn't decided yet whether to enter the race, Rubio said he could handle that challenge.

"If I decide to run for president, and I'm very seriously thinking about it because of where our country is today, I'm going to go out and run a campaign where I'm going to explain to people not only do I understand the national security threats that we face, but that I believe that we need to turn the page and fully embrace all the opportunities and confront the challenges of a new century," he said. "And I believe that once we do that, a growing number of people will become convinced, if I run, that we should be the person that they nominate."