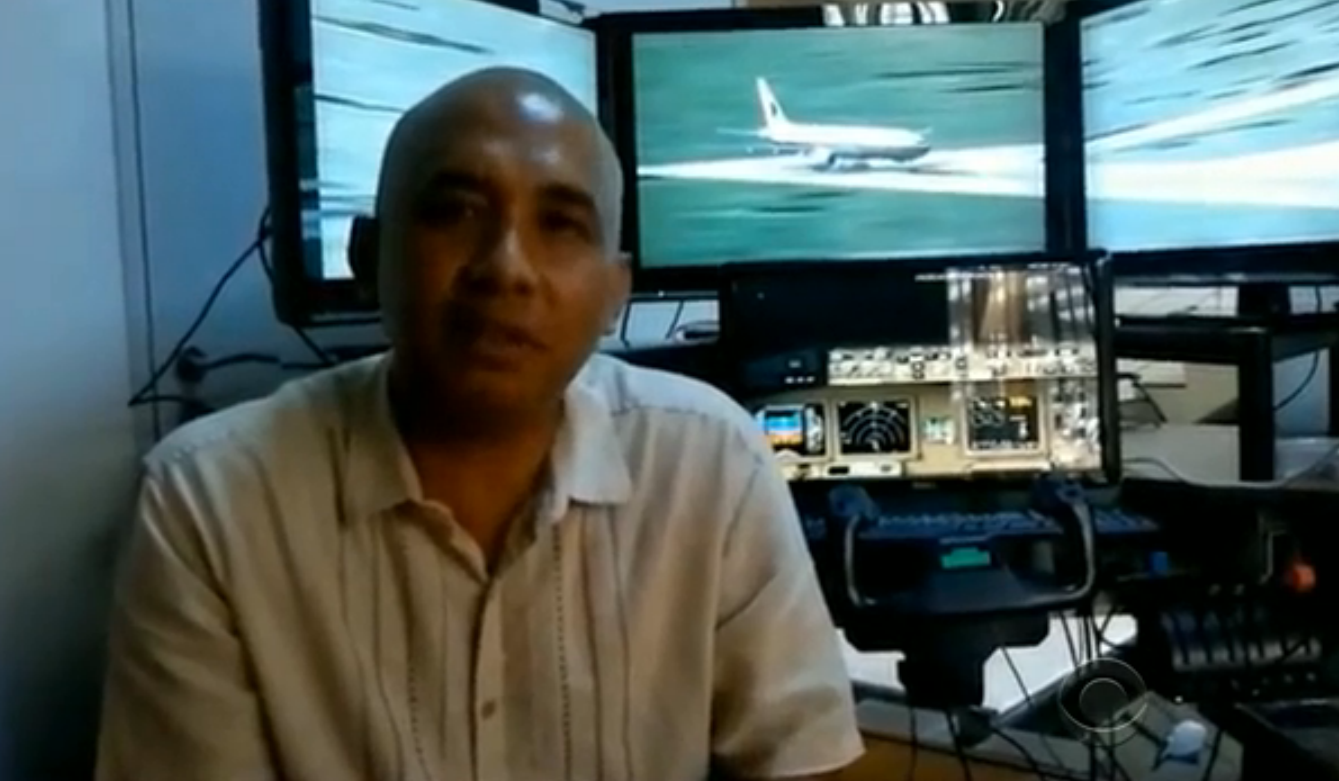 KUALA LUMPUR, Malaysia -- Malaysian investigators - with the help of the FBI - are trying to restore files deleted last month from the home flight simulator of the pilot aboard the missing Malaysia Airlines plane to see if they shed any light on the disappearance, officials said Wednesday.

Hishammuddin Hussein told a news conference that the pilot, Capt. Zaharie Ahmad Shah, is considered innocent until proven guilty of any wrongdoing, and that members of his family are cooperating in the investigation. Files containing records of simulations carried out on the program were deleted Feb. 3, Malaysian police chief Khalid Abu said.

CBS News has confirmed the FBI has been provided electronic data to analyze from the flight simulator. It is expected the hard drive will be brought to an FBI lab in the United States. This FBI is lending technical expertise, not taking over the investigation.

U.S. Attorney General Eric Holder said U.S. investigators are prepared to help any way they can.

It was not immediately clear whether investigators thought that deleting the files was unusual. They will want to check those files for any signs of unusual flight paths that could help explain where the missing plane went.

"That's tantalizing information because authorities are looking for any piece of data, any shard or thread or lead, to give them a sense as to whether there was any intent, premeditation, or plot to try to divert the plane for any part purpose," said CBS News national security analyst Juan Zarate.

Zarate also addressed a Malaysian newspaper report that the captain selected five runways on the simulator to practice.

"It's not unusual that he would be practicing on different kinds of runways," Zarate said. "That said, authorities are going to have to look at that to see what those runways looks like, if they match with runways in the region and perhaps some smaller runways in the Indian Ocean that could give them some clues as to where to look."

Sources told CBS News that there's evidence Malaysia Airlines Flight 370 turned off its route when someone typed a course change into the cockpit navigation computer, which would require training in the Boeing 777 systems. But sources say checks of the pilots' email and computers turned up nothing to suggest a plot.

Malaysia Airlines Flight 370 with 239 people aboard disappeared March 8 on a night flight from Kuala Lumpur to Beijing. Malaysian authorities have not ruled out any possible explanations, but have said the evidence so far suggests the flight was deliberately turned back across Malaysia to the Strait of Malacca, with its communications systems disabled. They are unsure what happened next and why.

Investigators have identified two giant arcs of territory spanning the possible positions of the plane about 7 1/2 hours after takeoff, based on its last faint signal to a satellite - an hourly "handshake" signal that continues even when communications are switched off. The arcs stretch up as far as Kazakhstan in central Asia and down deep into the southern Indian Ocean.

Police are considering the possibility of hijacking, sabotage, terrorism or issues related to the mental health of the pilots or anyone else on board, and have asked for background checks from abroad on all foreign passengers.

Hishammuddin said such checks have been received for all the foreigners except those from Ukraine and Russia - which account for three passengers. "So far, no information of significance on any passengers has been found," Hishammuddin said.

The 53-year-old pilot joined Malaysia Airlines in 1981 and had more than 18,000 hours of flight experience. People who knew Zaharie from his involvement in opposition political circles in Malaysia and other areas of his life have described him as sociable, humble, caring and dedicated to his job.

The crisis has exposed the lack of a failsafe way of tracking modern passenger planes on which data transmission systems and transponders - which make them visible to civilian radar - have been severed. At enormous cost, 26 countries are helping Malaysia look for the plane.

Relatives of passengers on the missing airliner - two thirds of them from China - have grown increasingly frustrated over the lack of progress in the search. Planes sweeping across vast expanses of the Indian Ocean and satellites peering on Central Asia have turned up no new clues.

"It's really too much. I don't know why it is taking so long for so many people to find the plane. It's 12 days," Subaramaniam Gurusamy, 60, said in an interview from his home on the outskirts of Kuala Lumpur. His 34-year-old son, Pushpanathan Subramaniam, was on the flight heading to Beijing for a work trip.

"He's the one son I have," Subaramaniam said.

CBS News' Seth Doane reports anger boiled over Wednesday morning as the Malaysian authorities prepared for their briefing. Two Chinese relatives of passengers held up a banner saying "Truth" in Chinese and started shouting before security personnel escorted them out.

"I want you to help me to find my son!" one of the two women said.

Hishamuddin announced that a delegation of Malaysian government officials, diplomats, air force and civil aviation officials will head to Beijing - where many of the passengers' relatives are gathered - to give briefings to the next of kin on the status of the search.

Aircraft from Australia, the U.S. and New Zealand on Wednesday scoured a search area stretching across 117,000 square miles of the Indian Ocean, about 1,600 miles southwest of Perth, on Australia's west coast. Merchant ships were also asked to look for any trace of the plane.

CBS News national correspondent David Martin reports that a U.S. P-3 Orion surveillance aircraft continues to search in the Bay of Bengal. The P-8 Poseidon has been assigned a search sector 1,500 nautical miles west of Perth. That means about half of each mission will be consumed just getting there and back.

The NTSB has been instrumental in helping the Australians in the South Indian Sea, Pegues reports. Working with data, they are reviewing possible flight paths along the original south arc of the search corridor. Now investigators are looking at other ways to narrow down a possible flight path.

Nothing has been found, the Australian Maritime Safety Authority said.

China has said it was reviewing radar data and deployed 21 satellites to search the northern corridor, although it is considered less likely that the plane could have taken that route without being detected by military radar systems of the countries in that region.

Those searches so far have turned up no trace of the plane, Chinese Foreign Ministry spokesman Hong Lei said.

Indonesian Defense Minister Purnomo Yusgiantoro said Indonesia military radar didn't pick up any signs of Flight 370 on the day the plane went missing. He said Malaysia had asked Indonesia to intensify the search in its assigned zone in the Indian Ocean west of Sumatra, but said his air force was strained in the task.

Hishammuddin said both the southern and the northern sections of the search area were important, but that "some priority was being given to that (southern) area." He didn't elaborate.

Malaysian investigators say the plane departed 12:41 a.m. on March 8 and headed northeast toward Beijing over the Gulf of Thailand, but that it turned back after the final words were heard from the cockpit. Malaysian military radar data places the plane west of Malaysia in the Strait of Malacca at 2:14 a.m.

The military in the Maldives, a remote Indian Ocean island nation, confirmed to Malaysia that reports of a sighting of the plane by villagers there were "not true," the Malaysian defense minister said.

German insurance company Allianz said Wednesday that it has made initial payments in connection with the missing plane. Spokesman Hugo Kidston declined to say how much had been paid, but said it was in line with contractual obligations when an aircraft is reported as missing.