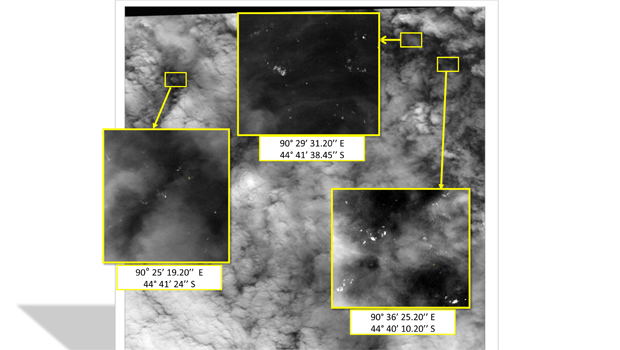 Nearly three weeks after the disappearance of Malaysian Airlines Flight 370, the search for the missing aircraft continues to focus on a remote area in the southern Indian Ocean, where a French satellite has found a possible plane debris field containing 122 objects. CBS News rounds up the latest on where the situation stands now.

Possible debris field found: The latest satellite images, taken Sunday and and relayed by French-based Airbus Defence and Space, are the first to suggest that a debris field from the plane - rather than just a few objects - may be floating in the southern Indian Ocean, though no wreckage has been confirmed.

Clouds obscured the latest satellite images, but dozens of objects could be seen in the gaps, ranging in length from 3 feet to 76 feet.

Findings focus tough search: The new data greatly reduced the search zone, but it remains huge - an area estimated at 622,000 square miles, about the size of Alaska. After fierce winds and high waves forced crews to take a break Tuesday, the search picked up again Wednesday, focusing on a 31,000 square mile swath of ocean about 1,240 miles southwest of Perth.

A total of 12 planes and five ships from the United States, China, Japan, South Korea, Australia and New Zealand were participating in the search. On Wednesday, Australian officials said a U.S. Towed Pinger Locator arrived in Perth along with a Bluefin-21 underwater drone. The equipment will be fitted to the Australian naval ship the Ocean Shield.

The Australian Maritime Safety Authority announced in a statement that Thursday's search will involve six military aircraft, five civil aircraft and five ships. Two Royal Australian Air Force P3 Orions, a Japanese Gulfstream jet, a US Navy P8 Poseidon and a Japanese P3 Orion will fly sorties throughout the day. Australia's Bureau of Meteorology warned that the weather is expected to deteriorate again, with thunderstorms, low clouds and strong winds on the way.

Objects spotted by plane: Various floating objects have been spotted in the area by planes over the last week, including on Wednesday, when the Australian Maritime Safety Authority said three more objects were seen. The authority said two objects seen from a civil aircraft appeared to be rope, and that a New Zealand military plane spotted a blue object. None of the objects were seen on a second pass, a frustration that has been repeated several times in the hunt for Flight 370.

The region being scoured is one of the most remote corners of the earth - a four hour flight from Australia's west coast and in seas that sometimes swell to 50 feet. Since radar has proved ineffective in the rough weather, the pilots and their crews are now relying on their own eyes, trying to spot the debris in the churning ocean.

Mixed messages from Malaysia: Malaysian Prime Minister Najib Razak announced Monday that a mathematical analysis of the final known satellite signals from the plane showed that it had crashed in the sea, killing all 239 passengers and crew on board. Two days later, Defense Minister Hishammuddin Hussein allowed for the possibility that some people aboard the plane might still be alive, saying: "If (the debris) is confirmed to be from MH370, then we can move on to deep sea surveillance search and rescue, hopefully, hoping against hope."

The Pentagon press secretary, Rear Adm. John Kirby, said Malaysia requested for more U.S. undersea surveillance equipment late last week when Defense Secretary Chuck Hagel spoke with Malaysia's defense minister and acting transport minister. The Pentagon says it has spent $2.5 million to operate ships and aircraft that have been helping look for the plane and has budgeted another $1.5 million for search efforts.

Satellite data suggests plane flew for over 7 hours: Malaysian investigators say the plane departed 12:41 a.m. on March 8 and headed northeast toward Beijing over the Gulf of Thailand, but that it abruptly turned back. Malaysian military radar data places the plane west of Malaysia in the Strait of Malacca at 2:14 a.m.

According to Malaysian authorities, the last confirmed signal between the plane and a satellite came at 8:11 a.m. - 7 hours and 31 minutes after takeoff. Airline officials have said the plane had enough fuel to fly for up to about eight hours.