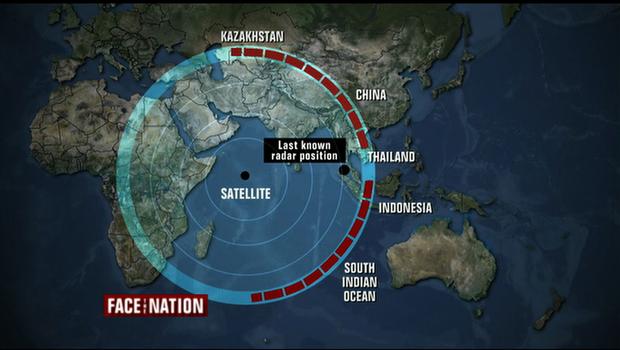 The revelation that the Malaysia Airlines Flight 370 communication system was partially disabled prior to the final communication from the plane's cockpit has raised new questions about how and why it disappeared. One, in particular, is prescient to a nation that has seen what can happen when a plane is hijacked: was this an act of terrorism?

Although it seems increasingly likely that there was foul play and the search has honed in on the pilots, there has still been no indication, such as a claim of responsibility, that there was an attack planned by a terrorist group.

"Many folks right away jump to the motive of terrorism but it may not have anything to do with terrorism," said Ken Maxwell, who headed the FBI's counter terrorism unit during 9/11. "You would think, if you want to speculate some more, that if this was a terrorist-related incident, something would have come up on the screen by now. Something from somewhere. Even just a little tidbit. A little intercept or some email somewhere."

"The absence of that tells me that this is something extremely unique, extremely anomalous," Maxwell said.

With no sightings of the plane or wreckage spotted in the nine days since the plane disappeared during a flight from Kuala Lumpur, Malaysia, to Beijing, China, little has been ruled out. House Homeland Security Committee Chairman Mike McCaul, R-Texas, said on "Fox News Sunday" that there is no evidence he is aware of that the incident was an act of terrorism, and that his briefings from various intelligence sources have pointed toward the plane's pilots.

Rep. Peter King, R-N.Y., who chairs the House Homeland Security Subcommittee on Counterintelligence and Terrorism echoed that assessment on ABC's "This Week."

"There's nothing out there indicating it's terrorists. Doesn't mean it's not, but so far nothing has been picked up by the intelligence community from day one," he said.

As of Sunday, the last signal from the plane that was picked up by a satellite suggested it could have gone one of two ways: north, toward Kazakhstan and Turkmenistan in central Asia, or south toward the Indian Ocean. Mark Rosenker, CBS News Aviation Safety Analyst and former chairman of the National Transportation Safety Board, said it is hard to believe the plane could have flown that far north without being detected by the Pakistanis, Indians, Chinese, or even Americans monitoring the area. Further south, Rosenker said, there would have been far less potential for monitoring.

CBS News Senior National Security Analyst Juan Zarate points out if the plane was found to have flown north, it would have traveled to "the heart of instability."

"These are hotbeds of terrorism where terrorists have not only held territory, but engaged in terrorism and terrorist training," he said. But they are also regions subjected to frequent surveillance by the U.S. and other countries, which is why many experts believe the plane would have been spotted by a U.S. radars or a foreign government in the region.

The search will continue in the coming days, with 25 countries now involved in both searching for the plane and digging into the backgrounds of its occupants.

McCaul and King both expressed lingering concern about two Iranian men who boarded the flight using stolen passports, although when their identities were discovered last week, authorities from Interpol said they did not believe they were linked to any terrorist groups. At least one was seeking asylum in Europe.

"Why did they have to get on that plane to seek asylum? The fact that it was so easy for them to get on with stolen passports - it just creates a terrorist atmosphere. Having said that, there's nothing showing it. I just wouldn't rule it out now is all," King said.

"I think the jury is still very much out on this strange mystery tragedy," said McCaul.