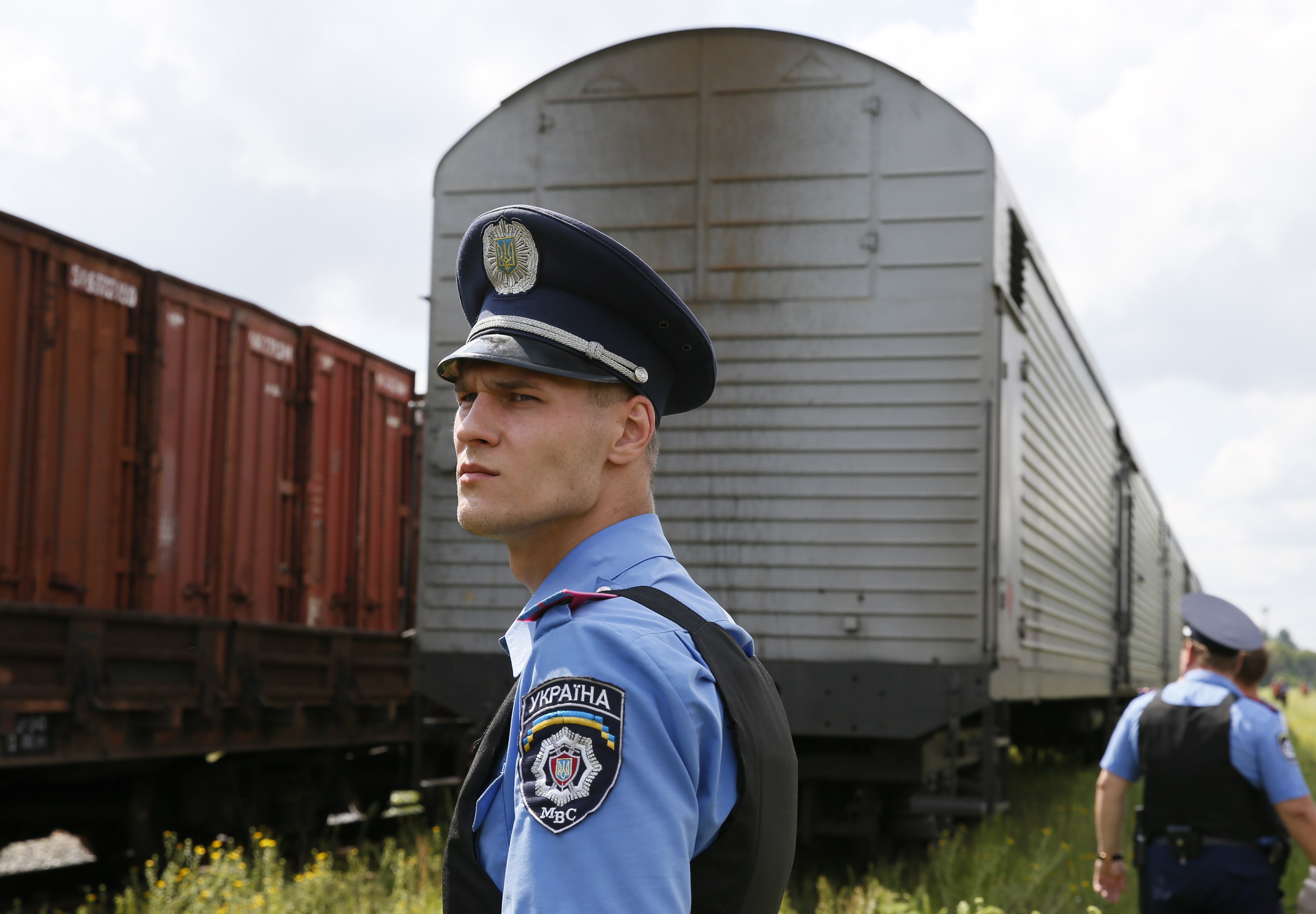 GRABOVO, Ukraine -- The train carrying the remains of most of the victims of downed Malaysia Airlines Flight 17 reached the Ukrainian government-controlled city of Kharkiv on Tuesday, a final stop before they were to be flown back to the Netherlands where their ill-fated journey began.

Dutch officials told CBS News Tuesday morning that forensic experts from the Netherlands would work through Tuesday night, at least, to try and identify the victims in Kharkiv. They were then to be moved onto a Dutch Royal Air Force C-130 already at Kharkiv airport for a flight back to the Netherlands.

However, in disappointing news to families waiting to bury their dead, it was disclosed that only about 200 bodies were aboard the train -- much less than the 298 who were aboard Malaysia Airlines FLight 17, reports CBS News' Mark Phillips.

The plane wasn't expected to depart before Wednesday morning, and the officials said another C-130 might have to be sent from the Netherlands to handle the remains. The governments of the Netherlands and Ukraine agreed that all the victims' bodies would be sent to the Netherlands. The Dutch prime minister said Tuesday it could take weeks, or even months to identify all the remains from the wreckage.

The plan explained by the Dutch official was subject to the security situation on the ground in eastern Ukraine, where fighting between the government in Kiev and the pro-Russian rebels has continued.

Intense international pressure on the pro-Russian insurgents who control the crash site saw them agree Monday to let the train leave their territory.

The rebels also handed over the Boeing 777's "black box" data recorders to Malaysian authorities on Monday, but as CBS News' Mark Phillips reports, that handover came with a price, and the investigation into the cause of the crash is going nowhere fast.

In exchange for receiving the black boxes from the local rebels, the Malaysians had to offer a diplomatic sacrifice; they acknowledged the self-proclaimed leader of the self-proclaimed, break-a-way "Donetsk Peoples' Republic," Alexander Borodai, and referred to him as "excellency."

No country has officially recognized his position, or his "republic" -- not even Russia.

Col. Mohammed Sakri, one of the Malaysian investigators who took possession of the black boxes, said they were "intact, even though a little bit damaged."

He said the first priority for his team was to identify and repatriate the victims' bodies, the second was to get the black boxes into the hands of investigators and lastly, to begin sifting through the 42-square-mile crash site to search for solid evidence of what brought the jetliner carrying 298 people down in the war zone of eastern Ukraine.

The U.K.'s Air Accidents Investigation Branch confirmed that it will carry out the data analysis of the MH17 black boxes. In a statement, the AAIB said its investigators in Ukraine "will continue their work there assisting the international investigation."

A Dutch investigator who arrived Monday to take charge of the bodies on the train was also the first foreign expert to visit the crash site, but he was only able to do so briefly.

The black boxes found in the farmland and small towns that dot the crash area southeast of rebel-held Donetsk -- if their data is still intact -- may provide some evidence of what brought this plane down, but it will take a painstaking raking-through of the debris by an international team of crash specialists to find whatever evidence may still exist.

As Phillips reports, it's the local rebel militias themselves, who the U.S. government and most of the international community accuse of shooting the plane down with a "Buk" SA-11 surface-to-air missile supplied by Russia, who are in control of the sprawling crash site.

President Obama said bluntly on Monday that the rebels continue to "impede" the investigation, and asked rhetorically, "what are they trying to hide?"

Finally though, Phillips reported Tuesday that the first team of actual aviation specialists, a team of three experts from Malaysia Airlines accompanied by European observers, had begun carefully surveying the field of charred and tangled wreckage -- the world's largest crime scene. Phillips saw the team taking notes and photos of the debris, and said they looked visibly shocked as they took it all in.

Compounding the frustration of victims and the international community over the hurdles which slowed the investigation's inception, the evidence around the crash site has not gone untouched. Phillips said he had personally seen local workers sifting through personal papers and belongings.

Perhaps they were doing so in a crude effort to identify the victims, but regardless, the site has been severely compromised.

The EU agreed to impose visa bans and asset freezes on more Russian officials, Dutch Foreign Minister Frans Timmermans said. He did not say how many officials were targeted or reveal their names.

He said the ministers also asked the 28-nation bloc's executive arm to prepare for more sweeping sanctions - including targeting the arms, energy and financial sectors - if Russia fails to back down from destabilizing Ukraine.

"Russia has not done enough to contribute to a de-escalation of the conflict," German Foreign Minister Frank-Walter Steinmeier said.