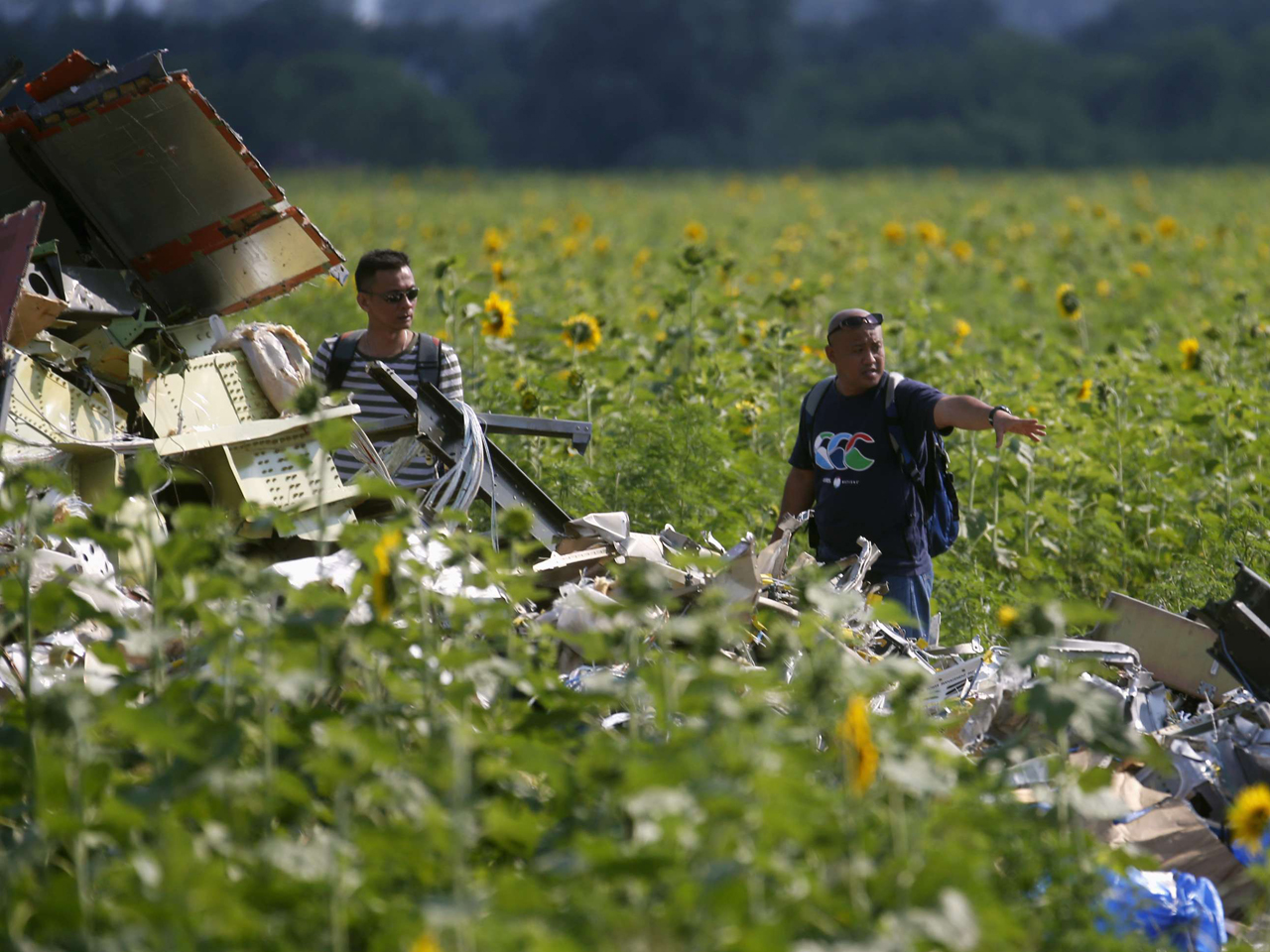 GRABOVO, Ukraine -- As the remains of more victims from the shootdown of Malaysia Airlines Flight 17 were loaded onto planes Thursday in eastern Ukraine for the flight to the Netherlands, the deteriorating security situation around the crash site kept a waiting team of international aviation inspectors away for yet another day.

As CBS News' Mark Phillips reports from the sprawling debris field -- a full week since the Boeing 777 was hit by a surface-to-air missile that U.S. officials believe pro-Russian separatists likely got from their backers across the nearby border -- only three experts from Malaysia Airlines have visited the site.

Australian Prime Minister Tony Abbott has sent 50 of his nation's police officers to London to join an anticipated United Nations security team to be sent to secure the crash site. But that plan was still in the works, and Abbott made it clear progress was coming too slowly.

"It's still clear that nothing is happening without the approval of the armed rebels who most likely brought the plane down in the first place. There has still not been anything like a thorough professional search of the area where the plane came down," he told lawmakers in Canberra on Thursday. "There can't be while the site is controlled by armed men with a vested interest in the outcome of any investigation."

Rather than tensions easing in eastern Ukraine, where the separatists have clashed with state security forces since April, the self-declared rebel administration in the region, the "Donetsk People's Republic," said in a statement on its website Wednesday that its fighters had shot down two Ukrainian fighter jets -- just 20 miles from the charred remains of Flight 17.

According to the group, one of the pilots was killed and another was being sought by rebel fighters.

Later Wednesday, however, Ukraine's Security Council said preliminary information suggested the missiles which downed the planes were fired from the Russian side of the border, according to Reuters. Moscow denied the charge.

Meanwhile, CBS News' David Martin reported that U.S. officials have detected a slow but steady increase in the number of Russian troops along the Ukrainian border in recent days, from 10-12,000 to 12-14,000.

While the ongoing violence and trading of blame for it continue to keep the full team of investigators at bay, Phillips says the few who have examined the wreckage are finding evidence to support the widely-held belief that an advanced surface-to-air missile bought Flight 17 down.

Much of the wreckage shows signs of having been hit by shrapnel, most likely from an exploding warhead. Neither Phillips nor the investigators had to search long or hard to find pieces of the plane's fuselage with what appear to be shrapnel exit wounds, likely indicating pieces of metal flying straight through the body of the plane.

Other parts of the shredded plane have big holes where shrapnel appears to have penetrated from the outside in.

The team of security monitors from the Organization for Security and Cooperation in Europe (OSCE), who arrived days before the three Malaysian experts, said they were handing over a report on what they found to the investigators, and according to spokesman Michael Borciukiv, they found "significant puncture marks to the fuselage."

The jet's two data recorders or "black boxes" were in the hands of British Air Accident Investigation Branch (AAIB) in southern England on Thursday.

On Wednesday the AAIB confirmed that it had downloaded "valid data" from the Cockpit Voice Recorder. Investigators were to examine the other black box, the Flight Data Recorder, on Thursday and they were then expected to hand over all relevant data to the Dutch team leading the investigation.

Meanwhile, to the west of the crash site, in the eastern government-held city of Kharkiv, dozens of containers holding more Flight 17 victims were loaded onto two military transport planes for the journey back to the Netherlands, where the ill-fated flight began.

The two planes landed at Eindhoven at about 4 p.m. local (10 a.m. Eastern) carrying an expected 74 bodies, according to Dutch officials. Further flights were to arrive on Friday and Saturday.

As the first planes carrying remains arrived Wednesday, CBS News' Elizabeth Palmer reported that it was declared a national day of mourning. Two-thirds of the passengers killed when Flight 17 was shot down were Dutch.

Two military transports, one Dutch and one Australian, brought the first 40 victims back to Netherlands.

One by one, the simple coffins were carried off the planes by Dutch soldiers and loaded into waiting hearses. The somber procedure went on for 90 minutes under the broiling sun.

Flanking the Eindhoven air base, the national flags of all those aboard the plane flew at half staff.

In all, 40 plain coffins left Eindhoven on Wednesday, setting off on a grim procession of hearses through the central Netherlands -- lined much of the way by Dutch mourners -- to a forensic center where the task of positively identifying all the remains was to take place.