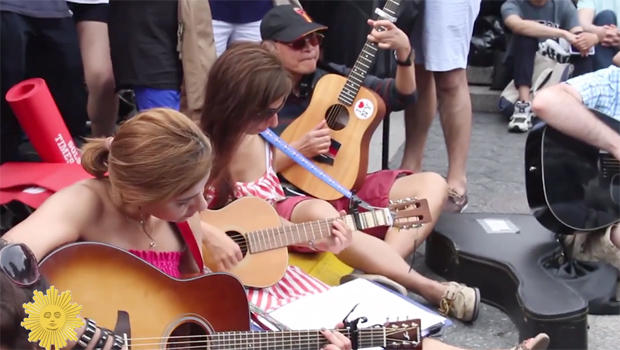 As if one needed an excuse to make music, June 21 will nonetheless offer an opportunity for musicians of all levels around the globe to join together in a musical celebration on the Summer Solstice.

Make Music Day participants range from the professional to amateur, and feature such disparate modes as hip hop, marching bands, opera, karaoke and bucket drummers, with the entire country their stage.

"Part of why it's so fantastic is this mixture of all the different genres all over community, coming together for one day," Aaron Friedman, president of the Make Music Alliance, told "Sunday Morning."

All Make Music Day events are free and open to the public.

The celebration originated in France 1982 as the Fête de la Musique, and is coordinated in the United States by the nonprofit Make Music Alliance, working with The NAMM Foundation.

To participate be sure to register at the MakeMusicDay.org website.

The website lists events around the country.  Here are just a few:

Mamma Mia Sing-Along Truck – You can all be dancing queens! The sing-along truck is making stops in NYC, Los Angeles, Chicago and Miami.

Bucket Drumming – Learn how to bang on a bucket in plazas and parks in more than 40 cities.

Young Composers Contest Winners – Compositions by the winners of a contest of young composers aged 13-21 will be performed in Cleveland, Minneapolis-St. Paul and other select cities.

Harlem to Broadway! – A concert featuring selections from the songbooks of legendary composers and Harlem residents, at Harlem's Marcus Garvey Park.

Twilight Chorus (for Humans) –  Sixteen voices will be dispersed across the the Brooklyn Botanic Garden grounds singing slowed-down transcriptions of birdsong, in a work by composer Peter M. Wyer.

Midsummer Mozart Mass Appeal – Singers and musicians from around New York are invited to join in a performance of Mozart's Requiem in D Minor, K.626 at the National September 11 Memorial.

Around town – Impromptu performances will be held at Union Square Park, Central Park, Governors Island, Theodore Roosevelt Park, in DUMBO, and elsewhere, while DJs and producers will set up their gear on sidewalks, engaging all comers in spontaneous collaboration.

The Mp3 Experiment Number Fifteen – If you have ears and ear buds you can join this interactive experience from ImprovEverywhere, with drum sticks provided courtesy of Promark.

Water Music – Handel's masterpiece and a new, site-specific work, will be performed at several locations along Boston's waterfront.

Usher-Themed Carpool Karaoke – Sit in a (parked) car and unleash your inner Usher.

Lift Every Voice – Choirs and vocal ensembles perform solo at locations around the city before joining to perform en masse in Millennium Park's Wrigley Square.

World Record Attempt – The Musical Intervention organization needs at least 365 people to join its attempt at breaking the world record for the most vocal solos in a song recording.

Shower Singing – Sing in the shower in public, at Lobsterman Park. Mic and amplifier provided.