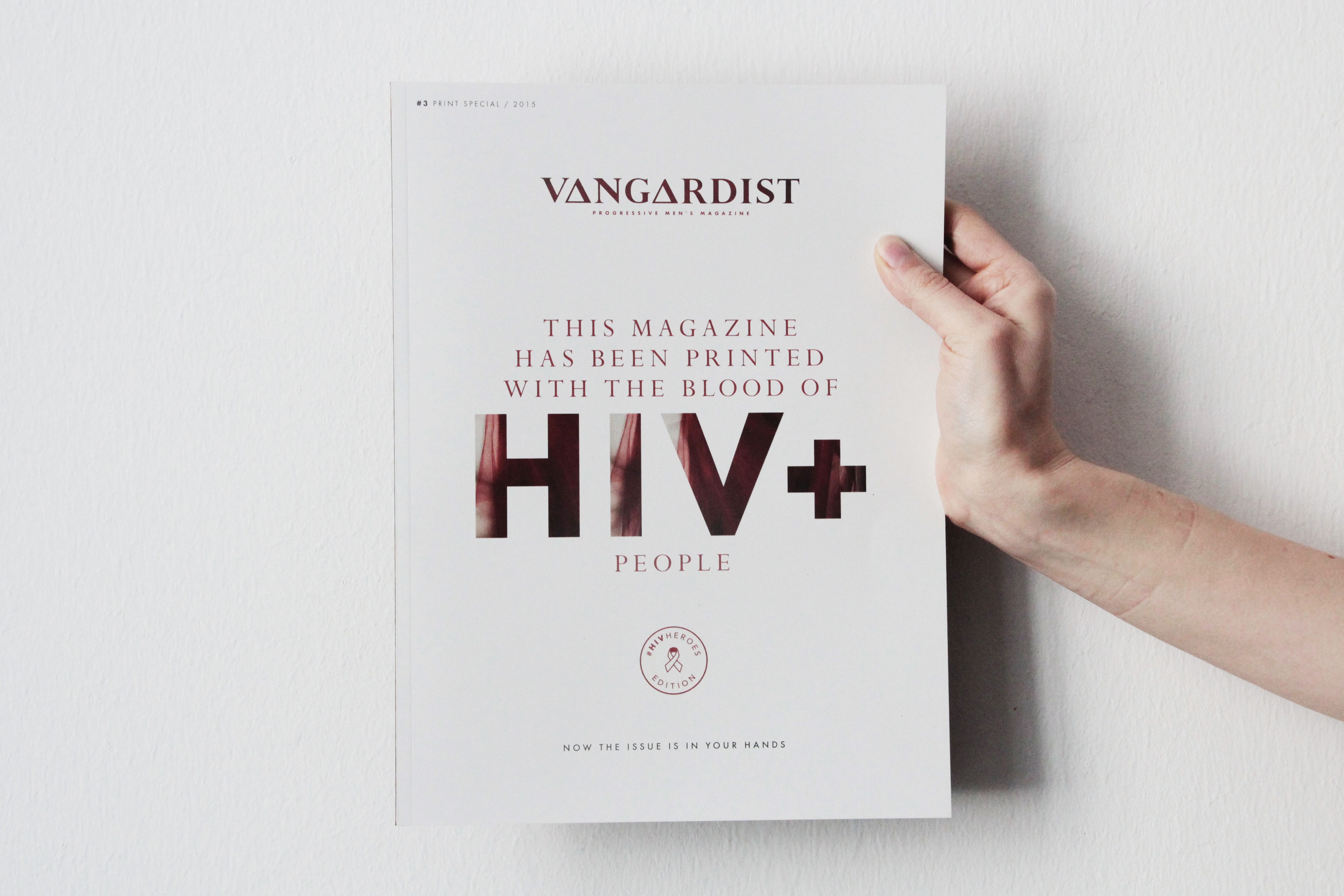 A magazine called Vangardist is seeking to draw attention to HIV and AIDS with a provocative cover that is printed with ink containing HIV-positive blood.

The special edition of the magazine features stories of "HIV heroes" at a time when the editors say too many people have grown complacent about the disease.

"There's been an 80 percent increase in HIV in the last 10 years -- that's according to the World Health Organization -- and that's pretty shocking," said Jason Romeyko, the Executive Creative Director of Saatchi & Saatchi Switzerland, who helped create the cover. "The reason why that's happening is people just aren't talking about it anymore."

Romeyko told CBS News he hopes the magazine will "reignite these conversations" -- and its stark cover certainly has people talking already.

Vangardist, which describes itself as a progressive men's magazine, is based in Vienna and publishes in English and German. It claims a readership of 100,000 a month, mostly online. Just 3,000 copies of this special HIV+ edition were printed.

To create it, three people living with HIV donated blood for the project. Romeyko described them as "incredible individuals" with diverse backgrounds, and they tell their stories in the magazine. One is a 26-year-old gay man from Berlin who calls himself "one of the most normal guys on the planet." One is a heterosexual man who wished to remain anonymous as he continues to struggle with his recent diagnosis. And one is a 45-year-old woman, a mother, who got infected 20 years ago by her then-husband who didn't tell her he had HIV.

Though the idea of touching traces of HIV-positive blood may spark a visceral reaction of fear or revulsion, the magazine assures readers that the cover itself is "100% safe" to handle.

"Scientifically, the virus dies naturally outside the body. It takes about 30 minutes for it to decompose," Romeyko said. The U.S. Centers for Disease Control and Prevention confirms HIV cannot survive outside its host for long.

The three donors' blood samples were taken to a lab at the University of Innsbruck where they were pasteurized, a heat process that assures the virus is neutralized and incapable of transmission.

From there, the blood was mixed into an ink solution for use in the printing press. But the magazine ran into some trouble finding a printer willing to do the job. It finally turned to a small print shop that had produced its very first issue, and the owner agreed to do it himself, not wanting to make his employees take part.

Everything about the cover is imbued with meaning, Romeyko explained. "We wanted people to actually hold the magazine and just make the comparison -- there's nothing wrong with holding someone who's HIV positive."

For those who are still squeamish, the magazine comes sealed in a clear plastic pouch. "Break the seal and help break the stigma," it says on the label.

"We decided to give people a choice," Romeyko said, encouraging them to take an active role in confronting the issue.

But he realizes not everyone is ready for the hands-on experience: "I showed it to a client and she was too scared to pick it up."

He also admits that some AIDS activist groups and NGOs (non-governmental organizations) the magazine consulted weren't thrilled with the idea and seemed concerned that the magazine might set off a panic or backlash against people with HIV.

It's a little too early to judge the public reaction, since the issue doesn't hit newsstands till next week. But subscribers have received their copies and Romeyko says it's already achieving its goal: "It's generating conversation -- conversations that need to be had."

With HIV/AIDS still the sixth-leading cause of death worldwide, claiming 1.5 million lives each year, the editors felt it shouldn't be treated as "old news" or relegated to just the occasional "awareness day" in the press.

In the opening pages of the magazine, Vangardist's publisher and CEO, Julian Wiehl, writes, "If you're holding the 'infected' print edition in your hands right now, you'll get into contact with HIV like never before....It will make you reflect on HIV and you will think differently afterward. Because now the issue is in your hands."

Once you flip past the provocative cover, there are articles spotlighting "HIV heroes" fighting the stigma of the disease, along with a few avant-garde fashion and pop culture features.

The magazine will be available online for free, although the editors are asking readers to make a donation to an HIV foundation. A number of copies of the HIV+ special edition will be auctioned for charity, and another 15,000 copies will be available printed in regular ink.

Those behind it are pleased with their work. "I think the cause is right and we've treated this very sensitively. It makes you think. It's very provocative, in a good way," Romeyko said.