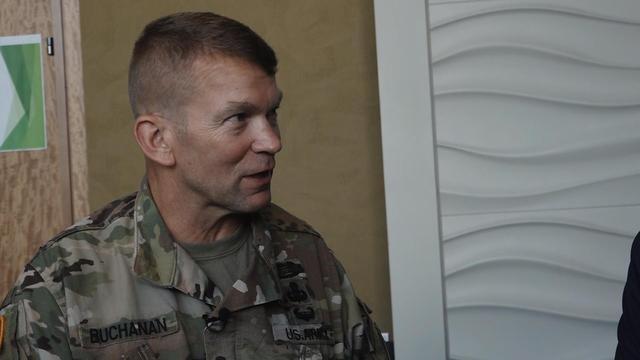 The top commander overseeing the U.S. military's response in storm-ravaged Puerto Rico says relief efforts are shifting from a crisis phase to one of recovery as federal troops prepare to leave the island.

Lt. Gen. Jeffrey Buchanan, the Pentagon's liaison to the Federal Emergency Management Agency (FEMA), announced on Friday that troops would begin winding down operations, six weeks after Hurricane Maria wiped out power across Puerto Rico and devastated the island's infrastructure. Many residents are still without power or access to clean water.

Buchanan, who serves as the commanding general of the U.S. Army North, was tapped to lead the federal military's response and arrived in Puerto Rico shortly after Maria struck in September. He is set to leave the island next week.

"On the military side, we're really here just for the emergency response," Buchanan told CBS News correspondent David Begnaud in a wide-ranging interview Saturday. "We've been transitioning out of the emergency response for the last several weeks. Some areas still need help, but it's more of a sustained effort, and moving, transitioning into a longer recovery and rebuilding effort."

Buchanan said the initial response involved search and rescue operations, opening ports around Puerto Rico and clearing roads. Until the roads were cleared, helicopters were required to transport supplies. He said all roads have now been cleared, so FEMA and local officials are able to deliver supplies much more easily without the assistance of the military.

"The tone of the conversation a month or six weeks ago was very dire. 'Here's really where we need help, we're still in the business of saving lives,' and those kinds of things," Buchanan said about his talks with mayors across the island. "And now we're working on getting the right balance of delivery of supplies."

He said long-term rebuilding efforts of roads, bridges and housing will fall to the Puerto Rican authorities and FEMA, which is leading the overall federal response.

"That's not really what the military is here to do," Buchanan said. "It doesn't make good sense to keep us for the long term for recovery." He cited the expense of using military resources and the importance of helping the local economy to get back on its feet. He said the cost of the military operation in Puerto Rico is now "into the billions."

Reflecting on what the government should do differently when responding to natural disasters in the future, Buchanan said the power of Maria made the response particularly challenging.

"We were in good shape in Texas, providing response right away. We were in good shape in Florida," Buchanan said, referring to Hurricanes Harvey and Irma. "And I thought we had positioned ourselves very well with the Navy. The problem with Maria is that the storm itself -- a Cat-5 storm, on the heels of another Cat-5 storm -- was so devastating, so the response required was way higher, way greater than we needed in Texas or Florida."

He said the response was "made all that much harder because we're [on] an island 1,000 miles into the Atlantic."

The Trump administration came under withering criticism for its slow response following the storm as many of the island's 3.5 million citizens were left in the dark for days and weeks on end.

"We didn't have ports open," Buchanan said. "In retrospect, we could have conducted an airborne operation -- flown troops in and have them jump out of an airplane. But that's not really what those guys are designed to do ... It's not like they're going to seize a bridge or something like that, that we would do in combat. Here we need to provide help."

He added that the land component of the military's response could have been more robust, and said he should have pushed for more resources like helicopters and logistical supplies.

Asked what the experience had taught him, Buchanan said "it taught me to love the people here."

"This is an awesome place. I'm just learning Spanish. I've got a long ways to go," he said.