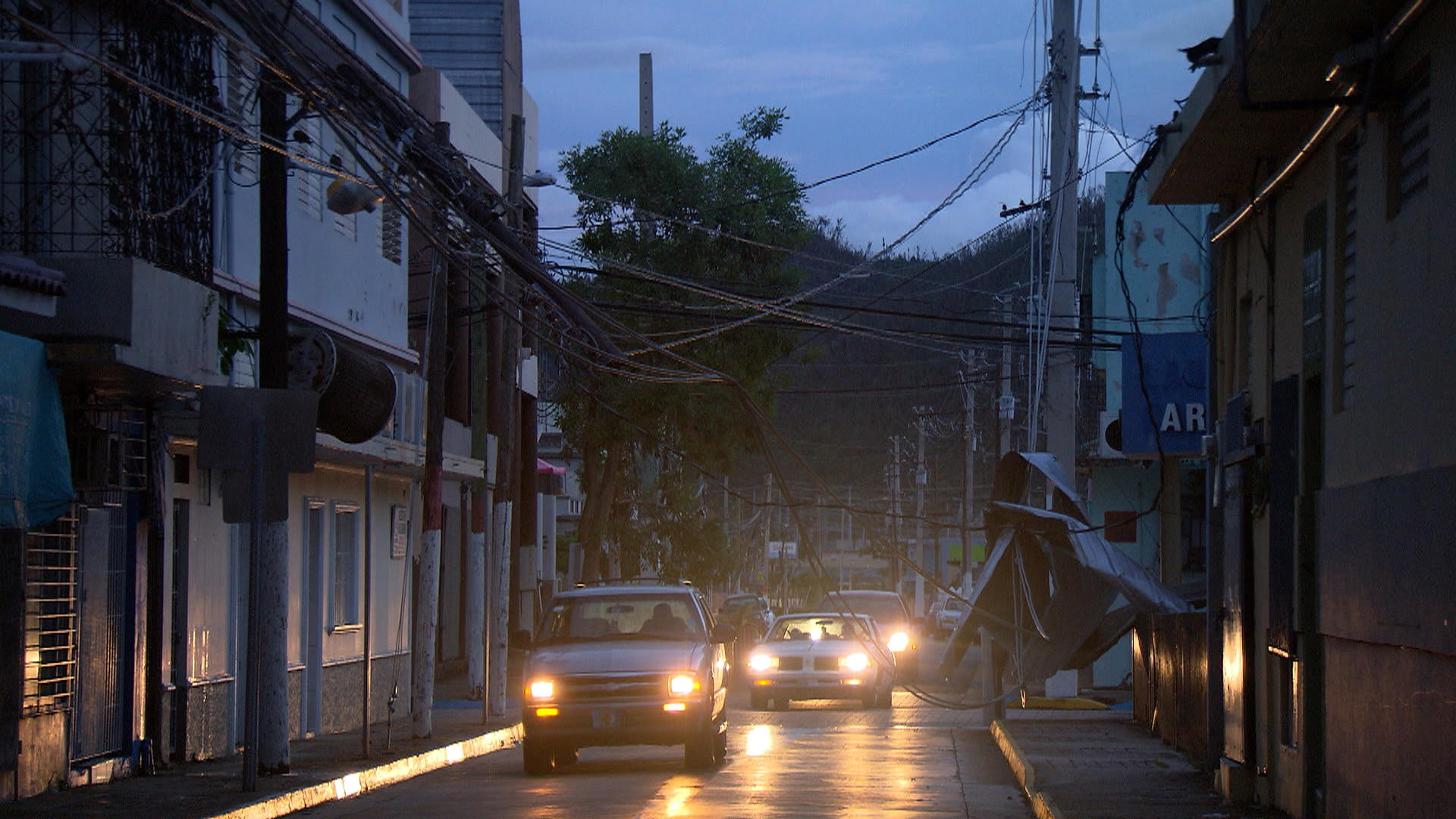 It's safe to say that of all the places in the country, the one that is suffering the most right now is the hurricane-ravaged island of Puerto Rico. Most people probably don't think of it as being part of the United States, but the people who live in Puerto Rico certainly do. It's been a territory since 1898, and its 3.4 million people are U.S. citizens. For the past 46 days, most of them have been without power, the longest blackout in American history. FEMA says it has distributed more food and water there than any disaster its ever been involved in. Damages could reach $90 billion and Puerto Rico is already bankrupt. There has been some finger pointing about the speed and effectiveness of the relief and recovery effort, but the misery there has much more to do with nature.

When Hurricane Maria arrived on the morning of September 20th, it was largely unheralded and never projected to hit the continental United States, which was already suffering hurricane fatigue. But the storm tore into Puerto Rico with sustained winds of 155 miles an hour and then began a slow 12-hour crawl across the countryside, with the center of the storm enveloping the entire island.

Governor Ricardo Rosselló: Storms that come through Puerto Rico typically hit part of the island. This hurricane essentially went right through the middle of Puerto Rico.

Steve Kroft: There was no safe haven.

Governor Ricardo Rosselló: There was no safe haven.

Ricardo Rosselló is the 38-year-old governor of Puerto Rico. He's been in office for only ten months and was one of the first to inspect the damage.

Governor Ricardo Rosselló: Once we flew over the island it looked like a bomb hit Puerto Rico. It was just all wiped out. It is a different set of circumstances and whoever doesn't understand that really needs to look at this twice.

There are all sorts of circumstances that make it unfair to compare Puerto Rico's situation with those in post-hurricane Texas and Florida. First, it's an island a thousand miles away from the U.S. mainland, with washed out roads, destroyed bridges, unreliable communications, and in most places still no electricity.

Before he retired, Héctor Pesquera was the special agent in charge of the FBI office in Miami. Now the native Puerto Rican is back home directing emergency services and public safety for the island. One of three people running the recovery along with the governor's office and FEMA.

Héctor Pesquera: We need to create some sense of normality here. We have to. We owe it to people. We need help. We need real help. We can't do it ourselves. There's no way. Neither could any jurisdiction either.

Another difference with Florida and Texas is the Puerto Rican terrain, especially in the mountainous middle of the island, which was hardest hit by Maria and is the most difficult to reach. We caught a ride in a Black Hawk helicopter with the governor, who pointed out all of the damaged homes lucky enough to get a FEMA-issued blue tarp to serve as an emergency roof. There is a serious shortage.

Governor Ricardo Rosselló: Our estimates are that -- about 250,000 homes have been either completely destroyed or severely damaged.

We were on our way to the isolated town of Utuado, parts of which were cut off from civilization after a raging Arecibo River knocked out a key bridge. The people here call it the camp of the forgotten and ferry supplies back and forth across the gap using a shopping cart on pulleys.

On the other side of the river, we found hundreds of people gathered to receive emergency food and water. The mayor told us it's a daily occurrence.

Mayor of Utuado: The biggest problem here is the water. I need water to the people.

There are still 15,000 people here helping, most of them military and National Guard who could be gone in a matter of months. FEMA -- the Federal Emergency Management Agency -- is in it for the long haul. Its man on the ground is Mike Byrne, who came here with a lot of other people from Hurricane Harvey in Texas.

Mike Byrne: Just 'cause it's not my first rodeo, it doesn't mean it's not a rough ride.

Along with the Army Corps of Engineers, Byrne will be planning and coordinating what he hopes will be the island's eventual recovery.

Steve Kroft: How long do you think you're gonna be here?

The immediate and the long-term problem is electricity, or the lack thereof. After 46 days the vast majority of Puerto Ricans are still in the dark, living without lights, refrigeration, television, computer networks, Wi-Fi, air conditioning, traffic lights, and offices to go to.

It's not just the downed utility poles and power lines that are literally everywhere, it's giant transmission towers and high tension wires in remote parts of the island.

Héctor Pesquera says more than 170 towers are down and the power grid completely destroyed.

Héctor Pesquera: The grid, the electrical grid to me -- is the backbone of all these things starting to come up. Until we get this grid thing resolved, it's gonna be very slow. But you can't run emergency power 24/7. That's why it's called emergency power.

"I think the majority of people will hope to have their power up in -- in January, maybe February. I would predict there's some people on that last mile that are gonna be close to spring or summer before they get those very, very last houses."

To get some sense of how arduous the task of restoring power to neighborhoods and businesses will be, a good person to talk to is Lieutenant General Todd Semonite who runs the Army Corps of Engineers.

Lieutenant General Todd Semonite: The last mile is gonna take a long, long time. And these are probably 62,000 power poles that have to be brought in from the United States, that have to be shipped here over water and then you're gonna run 6,100 miles of cable. So just the magnitude of that program -- do you want it done in a couple weeks? Of course you do. But the science and the engineering and the logistics to be able to make that happen is just gonna take some time.

Steve Kroft: How long do you think this is gonna take?

Lieutenant General Todd Semonite: We're gonna push like heck. I think the majority of people will hope to have their power up in -- in January, maybe February. I would predict there's some people on that last mile that are gonna be close to spring or summer before they get those very, very last houses.

Some of that work will have to be done by the Puerto Rican Electric Power Authority, or PREPA, which is where the damage from Hurricane Maria intersects with the island's financial crisis -- at a point called reality. PREPA is responsible for $9 billion of the government's $73 billion in debt. And the power company was falling apart before the storm hit, with no money, no maintenance, and apparently no management. Not even Governor Rosselló would defend it.

Steve Kroft: Do you disagree with that?

Governor Ricardo Rosselló: Not necessarily. Let me put it in this context. You have a monopoly of an essential service that is four or five times more costly than in the United States. And yet you're running on the red. So it's as if I had the only bakery in town. I was charging five times the cost of bread loaves to the townsmen. And I was still losing money. That's what's happening with PREPA.

Eight months ago the governor appointed Ricardo Ramos to run the bankrupt utility.

He quickly discovered that pressure from debt holders demanding payment had forced PREPA to cut corners on maintenance and other necessary services.

Steve Kroft: You've been in this job since March?

Steve Kroft: What did you inherit?

Ricardo Ramos: I inherited a junker.

The power company has lost two-thirds of its workforce in the past three years. And after Maria, the junker is for all practical purposes totaled.

Ricardo Ramos: We have no money. We have to recognize it. And no credit.

It's taking forever to get contractors and heavy equipment onto the island and out in the field. Already there's been a whiff of scandal after PREPA signed a questionable contract potentially worth $300 million with an obscure but well-connected Montana contractor called Whitefish that was already up and running. The contract, since cancelled, is now under investigation.

The bankrupt Puerto Rican government has even bigger problems. It's $73 billion in the hole after flooding the market with municipal bonds it can't pay off. Its finances are now being monitored by an oversight board created by Congress. For the time being, old debt payments have been suspended as the island confronts hurricane damages that could exceed $90 billion.

Steve Kroft: Is it realistic to think that you can come up with $90 billion?

Steve Kroft: What is the responsibility of the United States government to its territories like Puerto Rico?

Governor Ricardo Rosselló: We are U.S. citizens. We fight the same wars that U.S. citizens that live in the mainland fight. We, you know, it is the condition of being a colonial territory. Just to give you a sense -- if I move to the United States, to any of the states, I get the right to vote for the president, for my House rep, for senators and so forth. If you move to Puerto Rico, you lose those rights. It doesn't make any -- any sense that we have, a sort of second-class citizenship in the 21st century.

Steve Kroft: When you say Puerto Rico's a colony of the United States, what do you mean exactly?

Governor Ricardo Rosselló: Well, it-- it is a colonial territory. We are a possession of the United States. Congress has full authorization power over Puerto Rico.

Steve Kroft: So what's to stop the Congress from saying, "I'm sorry but, you know, you know we got California and Florida and Texas to take care of. And you're just a U.S. possession."

Governor Ricardo Rosselló: Well, you know what's gonna happen then? All -- vast majority of Puerto Ricans are gonna catch a flight and move to one of those states. Our only transaction to go to the United States is buying an airplane ticket. That's it. You don't even need a passport. So if conditions are so dire here the U.S. citizens here are gonna go to where they can get equal conditions. Now is that something that the United States wants?

Governor Ricardo Rosselló: It -- it is already happening.

You can see it every day at the San Juan airport. There are tearful goodbyes as families break up and head off to start a new life on the mainland. The JetBlue solution they call it. More than 100,000 have left since Maria struck Puerto Rico 46 days ago. Some will return, many won't.

In the last decade, nearly a half a million have resettled to new Puerto Rican communities in places like Kissimmee, Florida, outside Orlando, where they gather at the Melao Bakery every Sunday after church. Whatever happens back home on the island in the tough years ahead it will require the help of Puerto Rican Americans wherever they live.